India is expected to run a current account deficit of more than 4% of its GDP this year. At the moment this can be paid for with money coming in from abroad – but what if the flow of money were to suddenly stop? This column argues that India should not further delay a credit line from the IMF.


India’s current account deficit was 4.2% of GDP in 2011-2012 and is expected to be higher in 2012-2013. This is large and costly by any standard (especially considering India’s foreign exchange reserves are no longer big relative to GDP; in any case these are costly). At present, the current account deficit is being matched by surplus on capital account as there are capital inflows. But these can be volatile. What if there is a sudden stop? While some would argue that this is unlikely, we need to be prepared. In particular, we should consider the possibility of not just pure panic but also fundamentals changing – even though there has not been a financial crisis centred in India for a long time, that doesn’t mean that India is immune. Indeed, things can also go wrong due to outside forces or ‘extrinsic uncertainty’ (Shell 2008). So there is a concern in the short run (and also in the long run since it is uncertain when a good situation gets bad).

What should India do?

The public authorities can prepare themselves by buying an international credit line. This is an option to borrow. There are two parties – the seller of the option, often a bank, and the buyer, often a country. The seller examines the ‘condition’ of the buyer. If satisfied, they agree to sell the option. The buyer needs to pay a price up front (this becomes a sunk cost). The option is valid for a certain period. If there is a sudden stop of private capital inflows during the period, the public authorities in the buyer country can exercise the option and borrow funds. The seller is obliged to lend if the option is exercised. On the other hand, if there is no sudden stop, the buyer and the seller need not do anything else. Thereafter, the contract may be renewed for another period, and so on. The interest rate for the possible borrowing can be reasonable.

The large costs to the economy of a possible balance of payments crisis due to a sudden stop can be avoided if public authorities pay certain small price up front for a credit line. If the credit line is bought from the IMF, ‘Commitment fees... are around 24–27 basis points for lending between 500 and 1000 percent of quota’. Other sellers of credit lines can be the central banks in ‘strong’ countries and big commercial banks. How these institutions can in turn possibly provide the funds if credit lines are bought by many emerging economies and if they all exercise their credit lines simultaneously in the event of a systemic sudden stop is explained in Singh (2012b). See Fernández-Arias and Levy-Yeyati (2012) for related issues.

Besides its use in a crisis situation, a credit line paves the way for relatively more regular use of foreign exchange reserves (and market stabilisation scheme) that can stabilise the effective capital inflows in non-crisis periods. Jagdish Bhagwati (1998) (and Rodrik 1998) made a somewhat general case against capital mobility soon after the East Asian Crisis. However, they did not consider credit lines as a safeguard.

The use of a credit line is actually pervasive elsewhere though it may not always be explicit. Consider these examples.

There is a need to just extend the argument from these three cases and we have an argument for international credit lines to take care of a possible sudden stop. Indeed these are taking shape in practice. There are regional multilateral arrangements such as the Chiang Mai Initiative in South East Asia. There is also a Latin American Reserve Fund. Three countries (Columbia, Mexico and Poland) have bought Flexible Credit Lines (FCLs) from the IMF in 2009. The FED signed up for swap credit lines with the central banks in Brazil, Mexico, Korea, and Singapore in April 2009. The FED previously authorised temporary reciprocal currency arrangements with central banks in Australia, Canada, Denmark, UK, Europe, Japan, New Zealand, Norway, Sweden and Switzerland (Aizenman and Pasricha 2010).

Fix the roof while the sun is shining

In December, 2012, the Reserve Bank of India renewed its credit line from the Bank of Japan. There is now an option to borrow up to $15 billion (earlier it was $3 billion). However, it is still not large. Moreover, the effective coverage is just 20% at present due to some restrictions. There is a need for much larger option. I made this suggestion as far back as 2006 (Singh 2006). That was at a time when growth rate was higher and there was no major financial crisis. As the saying goes, the time to repair the roof is when the sun is shining. But it is still not late.

There is, it is often argued, an aversion to buying a credit line from an institution like the IMF. Here, some observations are in order.

A credit line is not a panacea. It does not remove the need for policies like a reduction in fiscal deficits and in gold imports, improvement in export competitiveness, and so on. These can help reduce the current account deficit. However, a credit line is an important safeguard alongside some foreign exchange reserves to avert a crisis.

Why not just simply restrict financial inflows? First, the domestic savings rate may not be large relative to the aspired growth rate (hardly anybody advocates a reduction in savings rate!). Second, lower financial inflows need not imply higher FDI. Third, the objection to financial inflows seems to be on the ground of volatility. But that is precisely where credit lines are useful. So restricting financial inflows does not seem to be a good idea unless the pattern of development chosen is special and is in conflict with openness.

Table 1 shows some data on macroeconomic variables in the three countries that have bought a credit line from the IMF. This suggests that the eligibility conditions are not stringent. It further suggests that India should be eligible for a credit line, given the Indian situation (data not shown here). 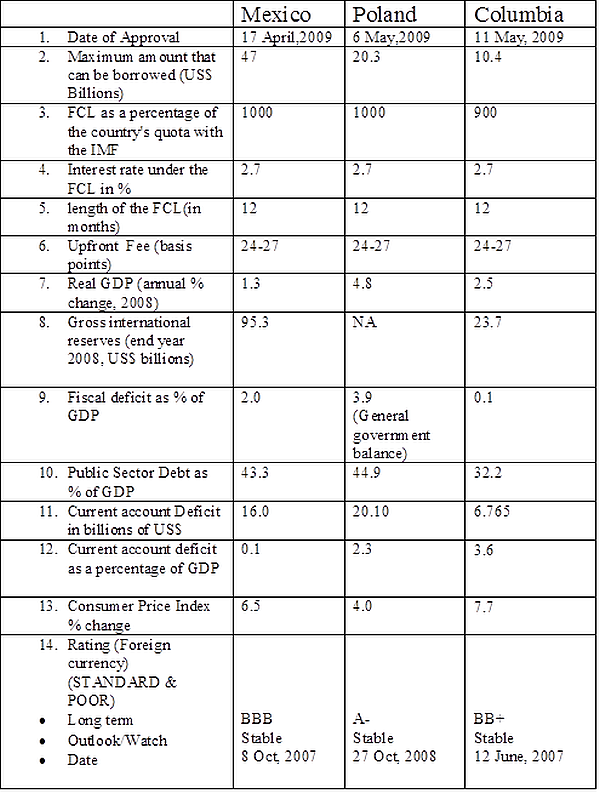 Given financial openness, my assessment is that India is not strong enough to ignore a credit line but it is at the same time not weak enough to be ineligible to buy a credit line from somewhere at a reasonable price. But what if India is actually not eligible? Then we do need to reconsider the free mobility of volatile capital flows. (This is obviously in the medium- to long-term context as any immediate change in policy can only aggravate the situation.) But alongside this we also need to ask ourselves why India may be ineligible – in case it actually is.