The less the merrier? Family size and education in India 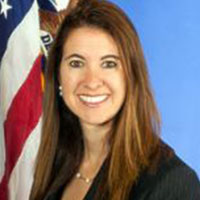 In the face of financial constraints, children from larger families are expected to have relatively less education and poor health. This column explores the empirical relevance this ‘quantity-quality trade-off’ in India with regard to education. It finds that family size has a negative impact on the schooling of children, particularly for low caste, poor and rural households.

Recent research in demographic economics supports the hypothesis that smaller family size (lower fertility) can spur economic development and help reduce poverty, both at the household and at the aggregate level (Ashraf, Weil and Wilde 2013). Smaller families are more likely to exit poverty traps and help reduce intergenerational transmission of poverty due to upward income mobility as household resources are shared among fewer members. One of the important ways in which high fertility affects economic development is through educational attainment of children. Children from larger families have less education and poor health because parents are financially constrained to invest in the education and health of each child. For financially-constrained households, it is more difficult to send children to school since children in these households very often contribute to the family’s income. In economic terms, the cost of school attendance, both direct and indirect (that is, opportunity cost), increases as the size of the family increases, thereby resulting in lower educational attainment for children in larger families. In economics, this negative relationship between family size and children’s education is known as the “quantity-quality trade-off” and was first modeled by Nobel Laureate Gary Becker (Becker and Lewis 1973).

In recent research, using the District Level Household Survey (DLHS) of 2007-08, we explore the empirical relevance of the “quantity-quality trade-off” in India (Kugler and Kumar 2015). The main challenge in identifying the causal effect of family size on children’s education is that parents may simultaneously decide about the number of children they want to have and also how much they can afford to spend on education and health of the children. It is likely that those parents who prefer to have fewer children also place more value on the education of their children. If this is true, then simply looking at the correlation between family size and education of the children may not reflect the true relationship between these two variables. To resolve the problem that both family size and education may be affected by third factors, we rely on variation across households that are external to them.

To address the issue, we exploit the cultural phenomenon of ‘son preference’ in India and use gender of the first child as the external source of variation that affects family size, but not education1. There is a large literature that documents that Indian parents, especially in rural areas, prefer sons to daughters due to dowry and old-age security. This has important implications for the household’s fertility decisions because in order to have the desired number of sons, parents continue to bear additional children in the family. To fix ideas, consider a household having a desire to have two sons. If the first two children are boys, then this household will not have more children. In contrast, if the first two children are girls or even if one child is a girl, then the parents will decide to have the third child, which will increase the family’s size. In Figure 1 below, we show that family size is larger if the first child born is a girl rather than a boy. In households where the first born is a girl, the number of children is 0.22 higher than in households where the first born is a boy. The increase in family size is 100% more (0.22 to 0.45) when the first two children are girls compared to households where the first born is a girl and the second born is a boy. Our estimation is conditional on the assumption that gender of the first child is truly exogenous and it does not affect educational outcomes directly. 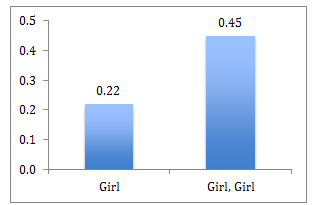 We find that Indian parents do make trade-offs between quantity and quality of children (that is, family size has a negative impact on schooling of the children). After controlling for birth order and the share of boys in the household, we find that an additional child born to the family reduces both years of schooling by one-fifth and the probability of being currently enrolled by 5 percentage points (Figure 2). Since quantity-quality trade-offs operate because households are financially constrained, the negative impact of family size may be more pronounced for households which are poor and belong to socially disadvantaged groups. 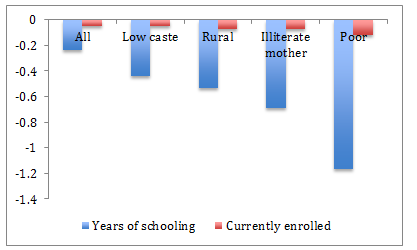 We check for variation in the trade-offs and find that the detrimental effect of an additional child on education is more severe for children from low caste and rural households. The magnitude of the trade-offs is also higher for children belonging to illiterate mothers and poor households. In contrast, we do not find a significant effect of family size on children’s education in urban areas or children belonging to wealthier households precisely because these households are less likely to be financially constrained.

At the current fertility rate of 2.5 children per women, India is expected to reach the replacement level of fertility2 by 2025. However, given the current state of the educational status of children, it seems unlikely that India will be able to reap demographic dividends. Our research shows that the high fertility rate within households may have caused the low level of human capital accumulation in India. A lot of the policy discussions on increasing per capita income emphasise the role of reducing population growth. Our findings indicate that diluting the culture of son preference may help reduce family size, which in turn may spur economic growth. The recent amendment in the inheritance law that provides equal rights to women has the potential to weaken son preference too, which represents a policy change in the right direction. Finally, establishing a welfare system that provides financial support in old age may reduce the need for parents to have larger families.A version of this column has appeared on VoxEU.