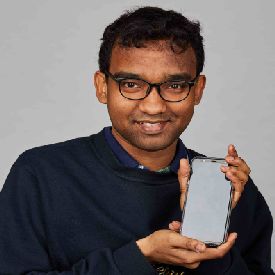 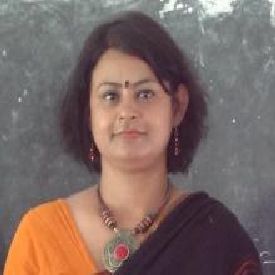 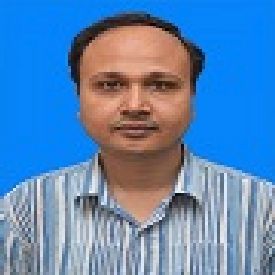 While extending the nationwide Covid-19 lockdown for two more weeks starting 17 May 2020, the government has given major relaxations for public movement and economic activity in non-containment zones in India. Essentially the current method for classifying all the districts into zones is unidimensional in nature, relying primarily on the existing penetration of the infection as a predictor of future spread. Chakrabarty, Mandi, and Mukherjee construct a multi-dimensional Vulnerability Index for Indian districts that can provide guidance for lifting the lockdown sequentially.

In this time of crisis, a developing country like India is faced with a trade-off between the risk of virus infection and risk of economic destitution. Poor measures to contain the spread of Covid-19 will lead to high number of deaths, and a possible collapse of the public health system. On the other hand, an inadequate plan for resuming the economic activities might lead to an irreparable damage to the growth potential of the economy, causing widespread poverty.

While extending the nationwide lockdown for two more weeks starting from 4 May, the central government laid out a plan for easing the restrictions in some parts of the country, possibly keeping this trade-off in mind. The government classified all the districts in India into three zones – red, orange, and green – based on decreasing risk of spread of the virus. There were some relaxations in economic activities in the orange and green zones. From 17 May 2020 onwards, the lockdown has been extended for two more weeks till 31 May, but with major relaxations for public movement and economic activity in non-containment zones.

The factors considered while coming up with the classification of zones are: incidence of Covid-19 cases, its doubling rate, extent of testing, and surveillance feedback from the districts. Essentially the method is unidimensional in nature, relying primarily on the existing penetration of the infection as a predictor of the spread of the virus. While there is no denying the importance of this factor in determining the risk potential of the districts, there are several other factors which are being discussed by the observers to be responsible for community spread. Including those, along with the existing factor, can make the classification scheme a little more comprehensive, and hence better suited to devising further lockdown policies. In this post, we attempt to suggest such a plan.

A multi-dimensional index to guide lifting of the lockdown sequentially

We construct a multi-dimensional Covid Vulnerability Index (henceforth, CVI) for Indian districts that can provide forward guidance of lifting the lockdown sequentially. We consider five additional propagating factors to build the index.

To reiterate, we use the following six factors in our analysis: (1) degree of urbanisation; (2) share of slum dwellers; (3) proportion of homeless people; (4) proportion of aged people; (5) state of medical infrastructure; and (6) confirmed number of Covid cases. We select to use the Census 2011 District Handbook datasets to construct the first five factors, primarily because it provides the measures for the whole population. The data on confirmed Covid-19 cases (the sixth factor) comes from covid19india.org website.

We combine these six factors in a district in the following way to come up with the CVI. In the first step, we divide the numbers for each of the factors by the population of the district to obtain the respective shares for each district. We denote this as

Where, f ∈ {urban, slum, homeless, aged, hospital beds, Covid numbers}, and i ∈ {All districts of India according to 2011 Census}. [∈ is a symbol used to denote set membership and means "is an element of".]

In the second step, these shares are normalised to build factor specific sub-indices, as shown in equation (1) below:

Where, S(f,i) is the sub-index for fth factor, for ith district, and and represent the maximum and minimum values of the ratio for the fth factor across all districts, respectively.

As a final step, we take a simple average of these sub-indices to arrive at the final index, as shown in equation (2) below:

Since there is no obvious way to assign the weights, we resort to attaching equal weights to the factors. [The symbol Σ is used to denote a sum of multiple terms.] The final CVI reveals a number of interesting features discussed below.

Figure 1 shows a histogram of the final index across the geography. The minimum and maximum values of CVI are 0.07 and 0.65 respectively, while the mean and median both are 0.28. But more important than the absolute values is the fact that most of the districts fall within a close range: between 0.20 and 0.40. Therefore, the moot question is: how should one assign the districts into different categories?

Figure 1. Distribution of districts according to Covid Vulnerability Index (CVI) 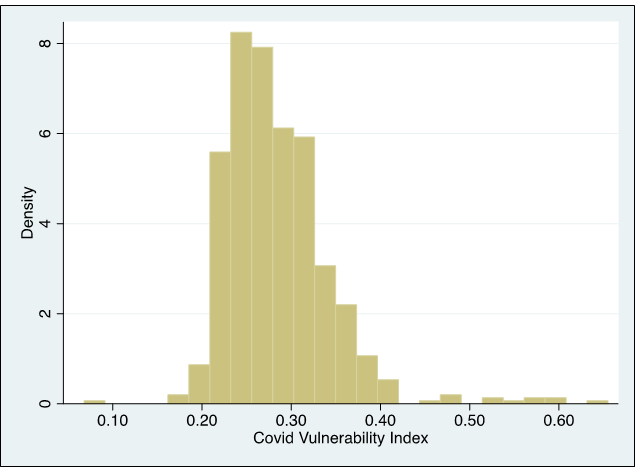 A straight-forward approach can be separating the districts at both tails of the distribution in green (where CVI is less than 0.2) and red (where CVI is more than 0.4), and the bunch of districts in the middle as orange. However, this method classifies almost all districts in orange category, leaving only 7 districts in green category and 21 districts in red category. Therefore, we take two approaches, one optimistic (toward opening the economy), and one pessimistic – primarily for illustrative purposes – to showcase the range of possibilities. Panel A and B in Figure 2 show the choropleth maps of these two scenarios, respectively. For comparison, we keep the present classification according to the government plan in Panel C, which categorises 130 districts in red zone, 284 districts in orange, and 319 districts in green zone1. 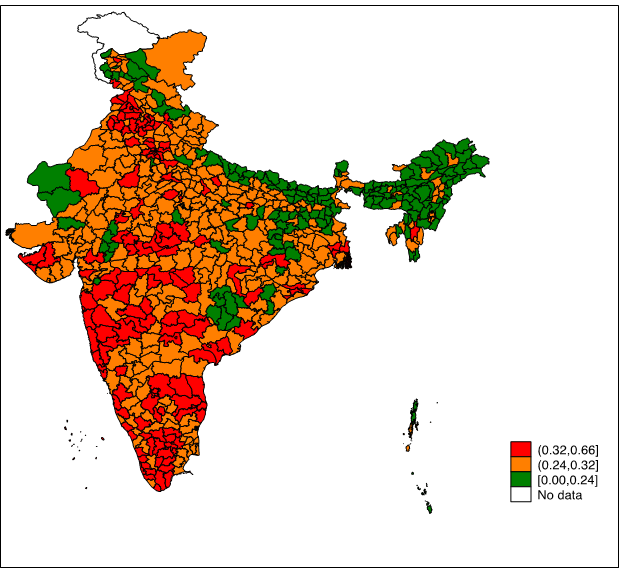 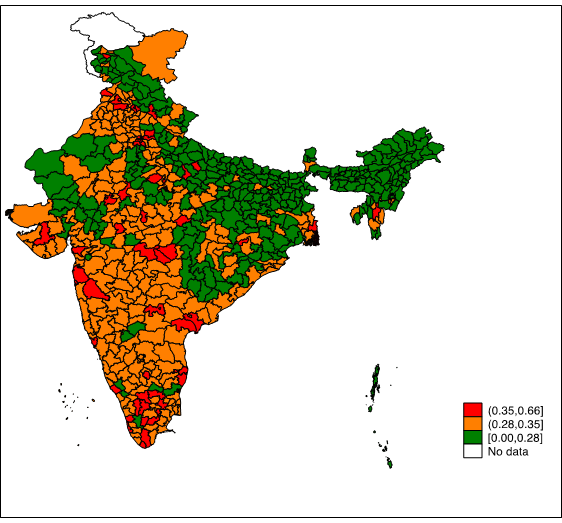 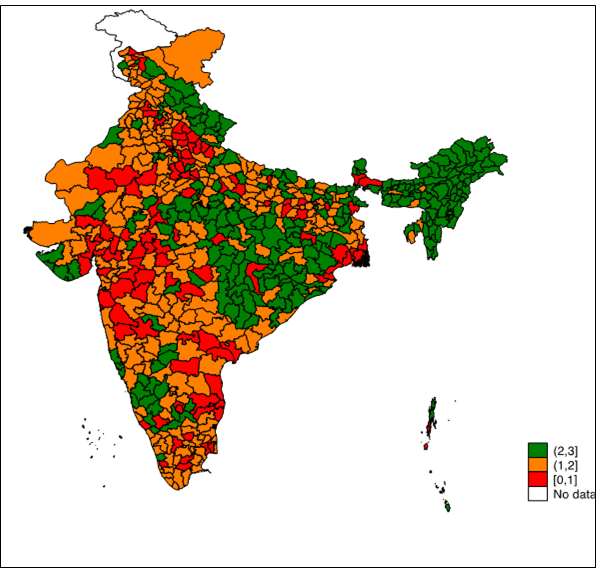 In the pessimistic scenario, we consider all districts below the 1st quantile value of CVI in green category, all districts above 3rd quantile value in red category, and the districts in between in orange category. 137 districts fall under green category, and 161 districts fall under red category under this classification. Panel A shows that most of the green districts are from the northeastern region and in the India-Nepal border region. Easing lockdown restrictions only in this set of districts will not increase economic activities substantially, since the overall contribution to the country’s GDP (gross domestic product) of the states to which these districts belong, is quite low.

Under the optimistic scenario, we consider all districts below the median value of CVI in green category, all districts above the 90th percentile of CVI in red category, and the districts in between in orange category. Only 70 districts are categorised as red in this approach, while 348 districts are categorised as green. Even though most of the districts from west and south of India are still under either red or orange categories, many districts from high economic activity states, such as Andhra Pradesh, Gujarat, Karnataka, Tamil Nadu, Maharashtra, etc. are now in green category. (The combined net value added from these states was over 40% in Fiscal Year 2016-17.) For example, Ahmedabad has been classified under red zone according to the government scheme. However, under our optimistic scenario, this city-district falls in green zone. This is primarily because of above average public health infrastructure (proxied through number of hospital beds in government hospitals in this study) and relatively lower share of slum and elderly population in this district.

Therefore, optimally choosing the cut-off index values can help in navigating the trade-off between containing the spread of the virus and resuming economic activities. Further, the approach is scalable to suit the need of policymaking: one, more relevant factors can be added to build a more nuanced CVI; and two, areas smaller than districts (for example, municipalities or corporations) can be assessed for their vulnerabilities using this index, given data for those areas is available for estimating the factors.

The government has kept open the possibility of modifying the classification of zones in subsequent weeks. A more broad-based approach like the one illustrated in this article can improve this crucial policy decision in the coming weeks. In the following paragraphs, we provide a case study of West Bengal, for better understanding of the flexibility of this approach.

In Figure 3, we draw a histogram of the CVI for different districts of West Bengal. The CVIs have been constructed using the latest figure of confirmed Covid-19 cases from West Bengal Bulletin (along with the other factors from Census data, as illustrated above). The distribution is skewed to the right, signifying that most of the districts are relatively less vulnerable.

Figure 3. Distribution of districts according to Covid Vulnerability Index (CVI) 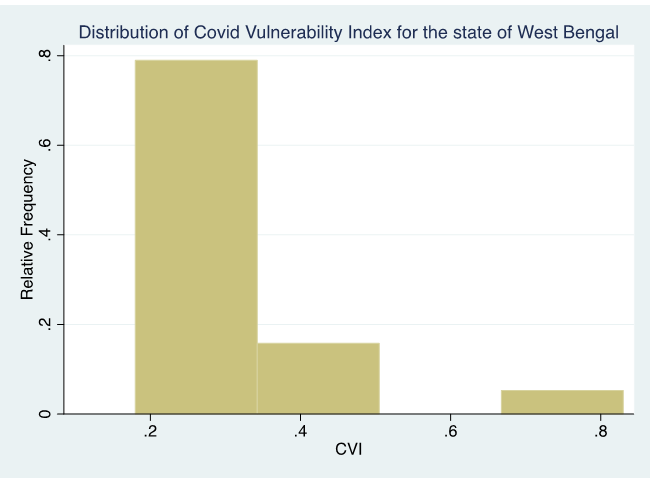 Table 1 shows classification of the districts within the state following our pessimistic and optimistic approaches. Some districts with no or very low number of Covid-19 cases, such as Purulia and Bankura, are classified under moderately vulnerable category (that is, orange zone) under our classifications. This implies that there is a good probability of the spread of the virus in these districts in near future, even though these places are relatively safer now. A closer look at the data suggests that this is due to inadequate health infrastructure in those districts. Such findings can potentially provide guidelines for resisting spread of the virus in the state in the coming weeks/months. Further, applying our approach at more granular administrative levels can detect potentially sensitive pockets within the districts of West Bengal state, and allow the administration to devise localised measures to fight the virus, while keeping economic sustainability in mind.

The order in which the author names appear on the website does not signify contribution, only the alphabetical order of names.