Much of India’s strategy to reduce the use of fossil fuels relies on a transition to solar energy. Based on a survey of potential solar micro-grid customers in Bihar, this column highlights the challenges associated with solar electricity becoming a sustainable and scalable solution, and the need for a new approach.

Last month, India helped the world get one step closer to an international climate pact when it ratified the Paris Climate Accord. Much of India’s strategy to reduce fossil fuels relies on a transition to renewable energy, namely solar. In fact, with solar prices worldwide plummeting, many countries are placing bets on solar.

Most analysis conducted to date suggests that among various competing solar technologies the economics are best for utility-scale photovoltaic (PV) projects. But grid-scale PV1 can only serve households actually connected to the grid. Millions of people in developing and emerging economies live without electricity, either because the grid has not reached them or because they remain too poor to pay.

Rooftop solar and solar micro-grids seem appealing as a clean solution to a crippling energy access problem that condemns these countries to low growth. Micro-grids - where a handful of homes are centrally wired to a field of solar panels - are becoming especially popular because, unlike rooftop solar, the high upfront installation costs can be spread throughout a village, making them cheaper. Often fully or partially funded by non-profits and social venture capital, solar micro-grids are popping up in villages from Africa to Bangladesh, where households are able to flick on a switch for light for the first time. 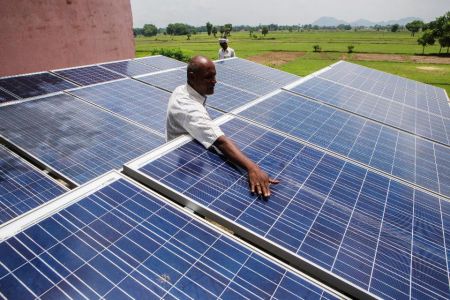 An employee inspects solar panels, part of a solar power micro-grid, in the village of Dharnai in Jehanabad, Bihar, India. Photographer: Prashanth Vishwanathan/Bloomberg

So are solar micro-grids a sustainable solution to lighting up the developing and emerging world? Unfortunately, ongoing work being conducted with my colleagues in the state of Bihar, one of the poorest regions in India, suggests they may have a tough time. A mix of inefficient policy, conflicting incentives and unreliable operations can ultimately lead to a product that consumers do not want.

The first challenge is low take-up. Our study was conducted as a randomised control trial with households in 33 villages offered solar micro-grid connections at a subsidised price, 33 others offered these connections at the full price, and 34 not offered connections at all (control group). Only 20% of potential micro-grid customers signed up, even with existing capital subsidies augmented with subsidies that cut monthly usage fees in half. There are various reasons this may have happened. One reason involved the low-power nature of the micro-grid. While we might think households would (and should) be willing to pay for small amounts of electricity to be able to switch on a light at night, this was not the case. Households wanted enough electricity to power a fan or even a television. If they couldn’t get that, they were willing to do without. A separate study (Lee et al. 2016) found a similar phenomenon in Kenya and Tanzania. As with any other product, getting people to pay requires giving them what they want – even if this means serving fewer people with the same number of solar panels.

Even where micro-grids have takers, solar is not the only game in town. In our study, solar micro-grids faced competition from generators burning a mix of diesel and kerosene. This source of electricity can be more flexible than solar, doesn’t require storage, and is often cheaper. In India, a specific problem occurred because of a government subsidy programme. The government provides an allotment of highly-subsidised kerosene to households meant for lamps. But not satisfied with the inferior lamps, households are trading in their kerosene to the operators of small generator plants. The kerosene is used to power the plants, and in return the households receive cheaper electricity. So, this policy essentially subsidises a dirty fuel burned in a high-pollution small generator, while simultaneously making it very hard for solar micro-grids to compete.

Take-up is not the only challenge. Creating a micro-grid requires building a micro distribution network with wires and metres. Large-scale utilities are plagued by theft and a lax payment mechanism and these problems transfer to solar micro-grid providers.

To reduce theft, the workarounds that businesses adopt are often incredibly inefficient. One way to steal electricity is to illegally charge a car battery. And one way to stop this is to deliver electricity from panel to household at an extremely low current. This means incurring high resistance losses and correspondingly less useful power being generated by panels, making it even harder to deliver enough electricity to run fans or televisions. As we strive to create ever more efficient solar panels, micro-grids often throw away half of what they generate.

Unsatisfied customers are less willing to pay. In the US, if we consistently don’t pay, our electricity will get shut off. Not so in India and other developing countries. Instead, all customers get less power, leading to more unhappy customers not paying their bills. In the case of utilities, the government steps in. Solar micro-grids don’t have this government backing. They can be kept on life support through external capital, but eventually they go bankrupt. Put simply, if you’re selling renewable electricity to the grid, distribution is not your problem. But if you’re a solar micro-grid provider it is.

Finally, there is the expanding grid. Grid take-up can be low because the quality of electricity supply is terrible, with outages for many hours of the day. But the world is not static and even small improvements and expansions in grid supply can quickly displace micro-grids. In the eyes of many households, only grid power is ‘real electricity’ and waiting can be worth it. This, of course, isn’t a bad thing if that grid power becomes supplied by renewable energy. Right now, it’s largely not.

Decentralised solar electricity has the potential to create real social and environmental value. But potential is not enough to make for a scalable solution. While the case of India could foreshadow things to come, it could also serve as an early lesson on how to build a new approach. Removing perverse incentives like the kerosene subsidy, aiding the adoption of smart meters that cut theft, and expanding the scale of micro-grids while providing commitments to buy excess generated power can help to make the micro-grid business more sustainable. Without such changes, the status quo may be doomed to fail.