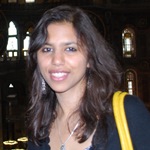 The affirmative action debate has always been riddled by the question of merit versus social justice, and discussions around having a caste census have once again reignited the controversy around reservations for Other Backward Classes (OBC). Based on data on major Indian states from 1960 to 2012, this article examines the role of OBC mobilisation in shaping development through social spending.

The discussions around having a caste census have once again reignited the debate on Other Backward Classes (OBC) reservations. The affirmative action debate has always been riddled by the question of merit versus social justice. The caste system is arguably one of the most rigid forms of social stratification, and continues to determine social and economic outcomes (Chakrabarti 2021). Critics of reservations argue that public employment should be based on performance. In response, activists have rightly questioned the very meaning of ‘merit’ in a society as unequal as ours. Political observers have written about the reluctance of the current regime at the centre to count OBCs as it may lead to "Mandal II"1 – a new wave of OBC mobilisation that could benefit regional parties. Data-inclined commentators have raised important issues regarding the heterogeneity within OBCs and the possible implications of the census in restructuring the quota system.

These are all valid questions. But can reservations in public employment help development? Public servants, after all, are expected to work towards the public good. There is a plethora of research on affirmative action, but it has almost exclusively focussed on Scheduled Caste (SCs), and to an extent Scheduled Tribes (STs). The lack of data on OBCs has also meant that we do not understand OBC politics very well. In a recent study (Chakrabarti 2021), I look at how caste-based mobilisation shaped development in India.

History of OBCs and OBC reservations

Let us begin with some historical context. The use of the term OBC goes back to the Madras Presidency in the 1870s. The British administration combined shudras2 and ‘Untouchable’ castes under the label "backward classes" to identify lower caste groups for affirmative action. Untouchables were reclassified as SCs in the 1935 Government of India Act. After Independence, the Indian government continued to use this classification (Jaffrelot 2003). The state took concrete measures to reduce caste oppression, in large part due to the efforts of B.R. Ambedkar. Untouchability was abolished in 1950 and the state mandated political representation for SCs and STs at both central and state levels. The Constitution had also resolved to make provisions for OBCs (Jaffrelot 2003). Two central-level Backward Classes Commissions led by Kaka Kalelkar and B.P. Mandal were appointed in 1953 and 1978, respectively. Yet, "OBC" continued to remain an abstract administrative category until the late-80s.

After Prime Minister V.P. Singh announced reservations for OBCs based on the recommendations of the Mandal Commission in 1989, massive protests by upper-caste students broke out throughout north India. Some scholars have argued that the emergence of the Bharatiya Janata Party (BJP) as a strong electoral force by attracting upper caste support during this period reflects an "elite revolt" against the rise of lower castes (Corbridge and Harriss 2000). Counter-mobilisation by the otherwise fragmented shudras consolidated the OBCs into a politically salient group. In what Yogendra Yadav has referred to as India’s "second democratic upsurge" (Yadav 2000), OBC political representation increased significantly in the 90s. Figure 1 plots the representation of different caste groups in state legislatures based on the original data collected in Jaffrelot and Kumar (2009). Parties like Rashtriya Janata Dal (RJD) and Samajwadi Party (SP), that mobilised OBCs, grew significantly with this "Mandalization"’ of politics (Yadav 2000), – what the BJP might be fearing now with the new caste census.

Figure 1. Distribution of caste-based representation in state legislatures, by decade 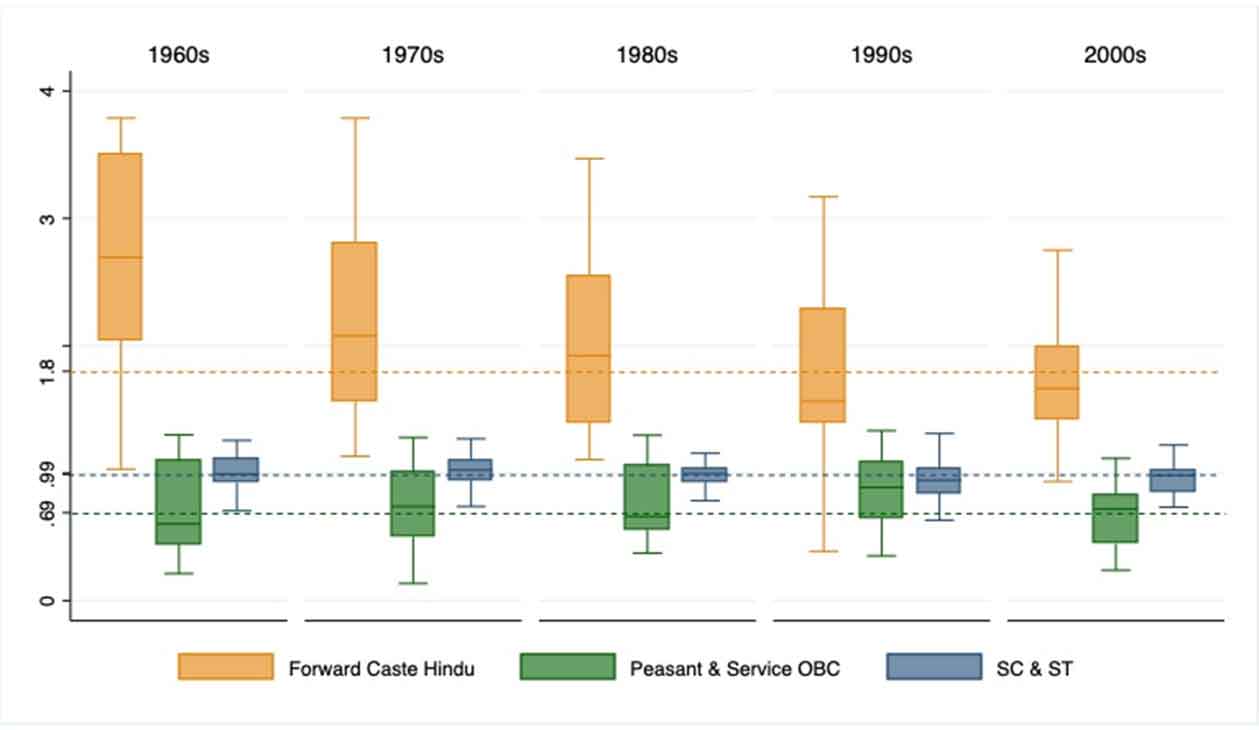 By the early 90s, the Chief Ministers of most states of India were non-Brahmin, mostly drawn from the OBC groups (Jaffrelot and Kumar 2009). These leaders pushed for OBC reservations in their states. Not unlike trends of political representation, the sharpest increase in OBC reservations took place after 1993, following the implementation of the Mandal Commission report (Figure 2). OBC quotas were limited to only four states of South India – Tamil Nadu, Kerala, Andhra Pradesh, and Karnataka, right after Independence. This is because South India had a much longer history of lower caste social movements. In Tamil Nadu, for example, political mobilisation by the Justice Party was led by shudras. By the 1935 provincial elections, the legislature in Madras Presidency was already two-third non-Brahmin. The first backward caste reservation in India, hence not surprisingly, was implemented under the Justice Party in Madras in 1921.

Currently all states have some level of quotas for OBCs in public employment. What has been impact of such quotas on development? Scholars have generally treated OBC reservations as a form of patronage politics. For example, a few years after the recommendations of the Mandal Commission were implemented, political scientist Myron Weiner described OBC reservations as "an offer to share the spoils of office, not a promise of social justice for the poor" (Weiner 1991). Governments led by backward caste parties in states like Bihar and Uttar Pradesh have been described as "neo-patrimonial" – states that pursue entrenched personal interests at the expense of public goods (Kohli 2012). While concerns of patronage and misgovernance in some states are not without merit (Banerjee and Pandey 2007), there has been very little empirical research on the implications of OBC politics on development.

I measure redistribution as the proportion of developmental spending that goes into social sectors, based on budget data from the Reserve Bank of India. I use data on the caste background of MLAs (members of legislative assembly) mentioned earlier, to measure political representation and draw on several sources3 to generate a dataset on OBC reservations since the colonial period. Caste is not the only factor that shapes development and hence, I account for a host of economic, political, and social factors, including state capacity, income, political ideology of ruling coalition, and political participation that have been shown to affect redistribution. Overall, this analysis includes 16 major states, accounting for about 95% of the population, from 1960 to 2012.

Contrary to expectation, I find that both SC and OBC political representation are not associated with redistributive spending. However, places with higher OBC political representation in combination with higher OBC reservation in the bureaucracy are more likely to spend more in social sectors. I plot the marginal effect of OBC reservation on redistribution, measured through both proportional and absolute social spending, in Figure 3.

Figure 3. Marginal effects of OBC reservation on redistribution, in terms of proportion of development spending (left) and per capita spending (right) in social sectors

Why should OBC political support for redistribution increase with administrative reservations? This question needs more research, but we know that bureaucrats are the main individuals involved in the implementation of government programmes. Local bureaucrats are also often the most visible presence of the state in citizen’s lives. Their inability or unwillingness to design and enforce development projects can have important implications in determining the success of policies of the political class. During my field research Bihar, I observed that the appointment of lower caste officials at the local level can help in breaking down long-established upper-caste patronage networks and hence potentially reduce ‘elite capture’ of government programmes. Caste bias in development projects has been documented in various sectors, including education and nutrition (Thorat and Lee 2012, Weiner 1991). A more representative bureaucracy can also make the state more accessible to a wider population and allow citizens to make claims on the state. Recalling the transformation after RJD appointed more officials belonging to lower castes, a Bihar-cadre IAS officer, for example, remarked, "Lower castes would not have dared to enter the office of the DM (district magistrate) or BDO (block development officer). They thought that if they said something, they would be punished. That changed. Now they have the confidence to raise their voice against the DM. They don’t know if their job will get done, but they can enter his office without fear."

These findings also tell us something useful about the limits of reservations. Scholars of SC politics have argued that the distributional effects of SC political representation have been limited because most parties are controlled by non-SC politicians (Jensenius 2017, Dunning and Nilekani 2013). In the absence of strong Dalit5 mobilisation, the policy preference of SC leaders is likely to be diluted by the agenda of the parties they represent (Jensenius 2017, Ahuja 2019). Most mainstream parties choose weak SC leaders who remain marginalised in party organisations. Kanshi Ram, one of the most prominent SC politicians, famously referred to SC politicians elected through the quotas as chamchas (sycophants) who merely follow the orders of the party leaders (Jaffrelot 2003). With the exception of the Bahujan Samaj Party (BSP) that has been successful in Uttar Pradesh, SC representation in the legislatures, is in large part, a result of State mandate. Mandated representation alone is not enough to provide the political agency needed to influence policy decisions. It needs to be accompanied with strong mobilisation. Though most research on caste and development has focussed on SCs, caste-based mobilisation in India has largely been led by OBCs.

This does not mean that we should turn a blind eye to patronage politics. But it is important to note that OBC mobilisation is relatively new in north India and overall, lower castes are still underrepresented in most state governments. Kerala and Tamil Nadu are celebrated as models of social development, but the politics of these states was mired in ‘identity politics’ for decades (Mathew 1982). If the political trajectory of the southern states provides some cues to the future of OBC politics – concerns for group-based and representational demands gradually give way to a broad welfare agenda and an inclusive civil society over the long term. Perhaps we have reason to be somewhat optimistic about the redistributive potential of OBC politics.

A shorter version of this post has appeared in the Hindustan Times.