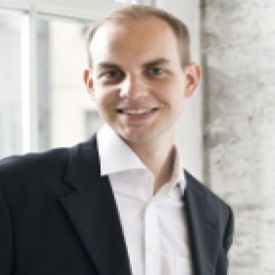 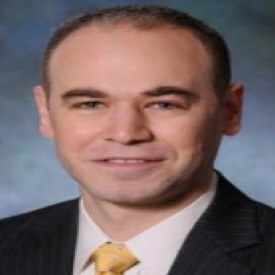 The strength of contract enforcement determines how firms source inputs and organise production, and hence influences productivity. Using microdata on Indian manufacturing, this article quantifies the impact of congestion and delays in Indian courts of justice on aggregate productivity. It finds on average across states, if court congestion were reduced to be in line with the least congested state, industrial productivity will increase by roughly 5%.

During the last two decades, economists have pointed out that in developing countries firms seem to use inefficient quantities of factor inputs like capital and labour in their production process. These distortions are so large that their removal would likely lead to large increases in industrial productivity and the level of development of these countries (Restuccia and Rogerson 2008, Hsieh and Klenow 2009). Where do these distortions come from? And how do these distortions affect individual production decisions and aggregate productivity?

The enforcement of contracts in India

In Boehm and Oberfield (2018), we study the use of intermediate inputs (materials) by manufacturing plants in India and link the patterns we find to a major institutional failure: the long delays that petitioners face when trying to enforce contracts in a court of justice. India has long struggled with the sluggishness of its judicial system. Since the 1950s, the Law Commission of India has repeatedly highlighted the enormous backlogs and suggested policies to alleviate the problem, but with little success. Some of these delays make international headlines, such as in 2010, when eight executives were convicted in the first instance for culpability in the 1984 Bhopal gas leak disaster. One of them had already passed away, and the other seven appealed the conviction. (Financial Times, 2010).

These delays are not only a social problem, but also an economic problem. When enforcement is weak, firms may choose to purchase from suppliers that they trust (relatives or long-standing business partners), or avoid purchasing the inputs altogether such as by vertically integrating and making the components themselves, or by switching to a different production process. These decisions can be costly. Components that are tailored specifically to the buyer (‘relationship-specific’ intermediate inputs) are more prone to hold-up problems, and are therefore more dependent on formal court enforcement.

We use production data from the 2000-01 to 2012-13 rounds of the Annual Survey of Industries (ASI), which is India’s main source of official statistics on the formal manufacturing sector. The ASI covers all plants that have more than 20 employees (or 10 employees if the plant uses power). An interesting feature of the dataset is that it contains detailed product-level information on each plant's intermediate inputs and outputs. These data on inputs allow us to better differentiate between different organisational modes of production. As an example, Figure 1 shows different input mixes among plants that produce bleached cotton cloth and those that produce polished diamonds. These different input mixes correspond to different degrees of vertical integration of the plants: plants that produce polished diamonds from raw diamonds do both cutting and polishing, whereas plants that produce polished diamonds from cut diamonds do just the polishing. Presumably, much of this variation in organisation or technology will arise naturally and is not associated with inefficiencies. Nevertheless, we will show that some of it is driven by weak contract enforcement.

Notes: Each dot refers to a plant-year observation, single-product plants only. Points have been jittered to improve readability.

We relate the plants’ expenditures on different types of inputs to the court delays in their state. We measure court delays as the average age of pending High Court cases, which we construct from microdata assembled by the Indian NGO Daksh (Narasappa and Vidyasagar 2016). Delays vary starkly across states: the average case is one year old in the fastest state, and four and a half years old in the slowest state. We also employ an instrumental variable1 strategy, where we use the facts that:

(i) Backlogs accumulate over time, hence the oldest high courts are the most congested ones (see Figure 2); and

(ii) New courts have been created mostly through the split of states, which has happened for reasons unrelated to court quality or the structure of industry.

We therefore instrument the average age of pending cases by the age of the high court.

Figure 2. Age of the High Court and speed of enforcement 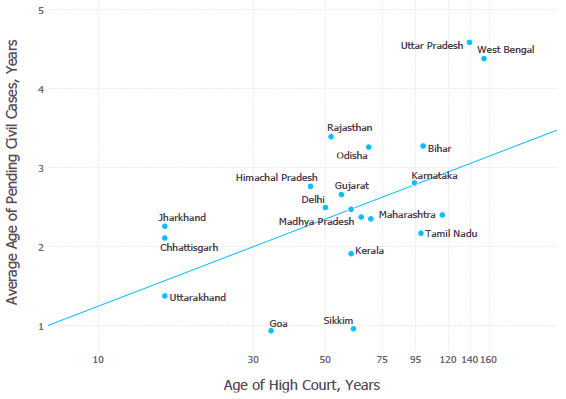 We find that the use of materials in production appears systematically distorted in states where courts are slow.

In industries that tend to rely on relationship-specific inputs, manufacturing plants have lower shares of materials expenditure in total cost in states with more congested courts.

Within narrowly defined industries (5 digit)2, plants in states with more congested courts tilt their input mix towards the use of homogeneous (non-relationship-specific) intermediate inputs.

Finally, plants in industries that tend to rely heavily on relationship-specific inputs are more vertically integrated when located in states with more congested courts. We measure the degree of vertical integration of plants by looking at the ‘upstreamness’ of the input mix from the plant’s output. For example, we classify a shirt manufacturer that uses yarn as an intermediate input (and hence does both weaving and tailoring herself) as more vertically integrated than a shirt manufacturer that uses only cloth (and therefore does just the tailoring).

Quantifying the role of contracting frictions

To quantify the impact of court delays on aggregate productivity, we construct and estimate a general equilibrium model. In the model, producers in each industry may choose from a range of different production functions3 which correspond to different technologies or organisational modes of production. Producers draw potential suppliers of each intermediate input they might use. To use each supplier, the buyer faces a match-specific productivity. Some inputs require customisation, and using the input gives rise to a hold-up problem. Good contract enforcement, either formal or informal, can alleviate the problem. We model the severity of the hold-up problem as random and match-specific. This captures the idea that for some suppliers ( that is, a close relative or those with whom there are repeated interactions) there are ways to resolve contracting problems informally, whereas for others the problem will be more severe. Each producer thus faces the choice of what production function to use and from which suppliers to source inputs.

(i) Direct impact: If a producer uses a supplier for which there is a severe contracting friction, use of that input will be distorted, which will directly lower productivity.

(ii) Indirect impact: A severe contracting problem might lead a producer to switch to a more costly supplier or less efficient technology to avoid the friction. While this is costly, a methodology that measured distortions using cost shares (that is,  Hsieh and Klenow 2009) would detect only the direct impact of the distortion, not the indirect impact.

An important property of our model is that even in the absence of distortions, the equilibrium would exhibit plants that produce in a variety of ways with different bundles of inputs and different cost shares. We identify wedges from systematic differences in average cost shares across states, which helps to alleviate concerns about mismeasurement being interpreted as misallocation. At the same time, the structure of the model allows us to account for both the direct and indirect impact when estimating the magnitude of the contracting frictions. 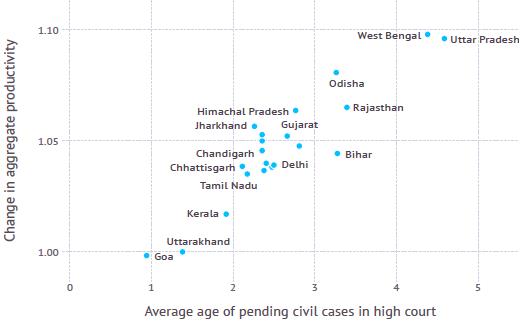 Notes: The figure shows the counterfactual increases in aggregate manufacturing sector productivity if the average age of pending cases were set to one year (1.00 = no change).

These estimates suggest that the economic benefits to improving courts of justice may be large. While we do not have direct estimates of how costly it would be to improve court efficiency, one should note that India spends only 0.12% of GDP (gross domestic product) on its judiciary (Government of India, 2015a, b) – a small amount compared to the potential benefits from improving courts. Furthermore, while we measure one channel, there are many other ways that improved contract enforcement could increase productivity and welfare, for example, by improving access to capital and labour.