The UN Gender Inequality Index has ranked India below several sub-Saharan African countries. Gender disparities are even more pronounced in economic participation and women’s business conditions in India. Using data from the 2011 Global Gender Gap report, Figure 1 shows that while India scores around the average of the gender gap index overall (horizontal axis), its score for women’s economic participation and opportunity is worse than 95% of all countries in the sample (vertical axis). Despite India being the second fastest growing economy in the world, gender disparities have remained deep and persistent in India. 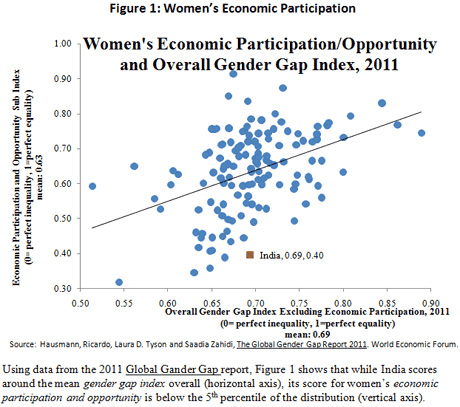 What explains these huge gender disparities in women’s economic participation in India? Is it poor infrastructure, limited education, and the gender composition of the labour force and industries? Or is it deficiencies in social and business networks and a low share of existing or incumbent female entrepreneurs? In a recent paper (Ghani et al. 2011b), we examine gender disparities in women’s business conditions in India. We use detailed micro data on the unorganised (informal) manufacturing and services sectors to explore what drives female entrepreneurship across districts and industries.

The good news is that the overall average female business ownership share in India has improved over time from 26% in 2000 to 37% in 2005. There has been a massive growth in women’s employment in informal sectors. Indeed, had the rate of female businesses not increased, the share of total employment in the unorganized manufacturing sector would have decreased by nearly 10 percentage points. There is, however, a wide variation across states and districts in the role of women in local entrepreneurship.

What drives the gender balance of new enterprise?

We use detailed micro-data on the unorganized manufacturing and services sectors, and develop relative rates of female entrepreneurship and business ownership at the district-industry-year level. We develop metrics that unite the incumbent industrial structures of cities with the extent to which industries interact through agglomeration mechanisms (Marshall 1920). These metrics condense complex local industrial structures into simple indicators of the suitability of a given area for an industry in terms of local labour force compatibility or input-output connections. We develop these metrics separately using female- and male-owned incumbent businesses to identify how gender-specific agglomeration benefits are for new entrants.

The relationship between infrastructure and the female entry share is the most policy relevant. Inadequate infrastructure affects women more than men, perhaps because women often bear a larger share of the time and responsibility for household activities. It is notable that while infrastructure access within a district matters, access to major cities is not found to influence the gender balance. We also find that transport infrastructure and paved roads within villages are especially important. Travel in India can be limited and unpredictable, and women face greater constraints in geographic mobility imposed by safety concerns and/ or social norms. Better transport infrastructure may alleviate a major constraint for female entrepreneurs accessing markets. The agglomeration metrics suggest that female connections in labour markets and input-output markets contribute to a higher female entry share. A one-standard deviation increase in either of these incumbent conditions correlates with a 2%-3% increase in the share of new entrants that are female. This compares to a base female to male entry ratio of 21%.

The agglomeration metrics suggest that female connections in labour markets and input-output markets contribute to a higher entry share. A one-standard deviation increase in either of these incumbent conditions correlates with a 2%-3% increase in the share of new entrants that are female. This compares to a base female entry ratio of 21%.

Most of the basic district-level linkages observed for manufacturing continue for services. Somewhat surprisingly, a higher female entry ratio is not associated with a greater female sex ratio in the district, but female literacy rates and general education levels are more predictive. This link may be due to services being more skill intensive than manufacturing in India (Ghani, 2010). Stronger female-owned incumbent businesses again predict a greater female entrepreneurship in service industries.

Our results support the conclusion that female entrepreneurship in India follows from incumbent female-owned businesses in a district-industry that encourage subsequent entry. Marshallian channels are important, but they mostly appear to be operating through the district-industry agglomeration for female business owners itself. While our approach does not rule out every potential bias, it does circumvent the most worrisome endogeneity or omitted factors.

A central driver of economic growth over the past century is the increased role of women. This growth in the role of women comes in many forms: better education and health that increase female labour force participation, reduced discrimination and wage differentials that encourage greater effort, and improved advancement practices that promote talented women into leadership and managerial roles. Simply put, empowering half of the potential workforce has significant economic benefits beyond promoting gender equality (Duflo 2005, 2011; World Bank 2012).

Gender networks thus clearly matter for entry into entrepreneurship. However, we need to develop a better understanding of how gender networks influence aggregate efficiency. An important message of our research is that these linkages and spillovers across firms can depend a lot on common traits of business owners. Likewise, interactions between the informal and formal sectors may not be as strong as interactions within each sector. Further research needs to identify how these economic forces vary by the composition of local industry. This will be especially helpful for evaluating the performance of industry concentrations in developing economies and guiding appropriate policy actions.

Recent research has emphasised the role of women in development. India’s economic growth and development depends upon successfully utilising its workforce, both male and female. Despite its recent economic advances, India’s gender balance for entrepreneurship remains among the lowest in the world. Improving this balance is an important step for India’s development and its achievement of greater economic growth and gender equality. While achieving economic equality sometimes requires tough choices (e.g., progressive taxation that may discourage effort), the opposite is true here.

The views expressed here are those of the authors and not necessarily The World Bank or any other institution they may be associated with. This column appeared in a World Bank blog.