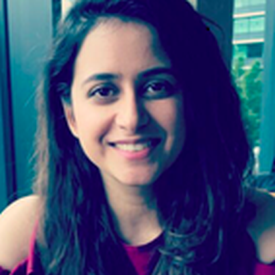 Despite its manufacturing capability, India, unlike other Asian countries, has failed to integrate into global value chains (GVCs). In this post, Karishma Banga discusses the nature of India’s GVC integration, primarily through forward participation; the sectors that fuel productive linkages; and the factors that have caused low integration – lack of well-developed, labour-intensive industries, large domestic market, labour market rigidities and low FDI. Finally, she recommends strategies to maximise gains for domestic firms integrating into GVCs.

The Covid-19 pandemic has put the spotlight back on global value chains (GVCs) as a driver of economic growth, industrial exports, and job creation. GVC trade differs from traditional trade, with the former involving intensive firm-to-firm interactions, characterised by contracting and specialised products and investment (Antras 2016). Economies with advanced technologies and high wages tend to offshore manufacturing stages of the value chain to nearby developing countries with low wages, leading to creation of regional supply chains (Baldwin 2006). One such regional supply chain is ‘Factory Asia’1. Despite its proximity to Factory Asia, and its manufacturing capability in several sectors, India has failed to integrate into GVCs (Baldwin 2011, Sen and Srivastava 2011, Athukorala 2019).

India’s GVC participation is significantly lower than China, Vietnam, Korea and other Southeast Asian countries. Network products – for which GVCs are the dominant mode of production – such as electronics, computers, telecommunication equipment and vehicles, account for only 10% of India’s total merchandise exports (as compared to about 50% of the exports of China, Japan and Korea) (Veeramani and Dhir 2019).

Data from the Trade in Value Added (TiVA) database demonstrates that India links into GVCs mainly through forward participation (domestic value added (DVA) in exports of intermediate goods, as a share of gross exports) rather than backward participation2 (foreign value added (FVA) as a share of gross exports). This indicates its relatively higher engagement in upstream production activities3

The largest share of India’s forward linkages is made up of renting machinery and equipment, followed by chemicals, coke and petroleum, basic and fabricated metals, textiles, and agriculture products (Mitra et al. 2020). Forward linkages in the manufacturing sector have been on the rise since 2012, while backward linkages have declined from 35% in 2012 to 23% in 2016 (Figure 1). Just six sectors account for nearly 60% of India’s manufacturing GVC exports – coke and petroleum (18.3% of GVC exports), renting of machinery (14.9%), chemicals (11.2%), basic and fabricated metals (8.6%), and transport equipment (6.3%) (Mitra et al. 2020).

Why did India miss the GVC boat?

Unlike East Asia, India missed an important stage of promoting labour-intensive industries during its industrialisation. In 2020, the manufacturing value added share of India’s GDP was only 13%, much lower than other Asian economies (Figure 2). Despite having comparative advantages in unskilled labour-intensive manufacturing activities, India’s commodity composition of exports is biased towards capital- and skill-intensive products (Veeramani, 2019). India’s manufacturing GVC trade, both in terms of backward and forward linkages, has also gradually shifted from the Global North to countries in the Global South (Banga 2021).

Figure 2. Value added by manufacturing as a share of total GDP for Asian countries in 2020

Source: World Development Indicators
Note: Medium and high tech manufacturing includes industries in which producers of goods incur relatively high expenditure on research and development. The two taken together indicate the share of labour-intensive manufacturing in the country.

Higher absolute and relative labour market rigidities are known to deter foreign investment and lead to reduced GVC spill overs (Javorcik and Spatareanu 2005). In labour-intensive production, India’s archaic labour laws have created exit barriers, disincentivising large firms from choosing labour-intensive activities and technologies (Krueger 2010). Stringent labour market regulations have further resulted in a slow growth of employment in the manufacturing sector and labour market frictions, which have in turn led to the employment of inefficient labour (Panagariya 2008, Gupta and Kumar 2012).

Another reason for India’s low integration in labour-intensive chains (such as those of garments manufacturing) is the large size of the domestic market. In the presence of high export standards and strict delivery pressures, Indian garments firms find it easier to supply to the domestic market, and to neighbouring countries and the Middle East, which have lower quality standards compared to the US and EU (Ray 2019). Moreover, India’s forward participation is higher than backward participation in the textile, wearing apparel and leather value chain (Figure 3), indicating that Indian firms tend to link into the garments value chain at the lower end, exporting yarn and woven fabrics of cotton and of silk. This has been further confirmed using product-level analysis (see Gupta 2015).

Figure 3. Linkages in the textile, wearing apparel and leather GVC 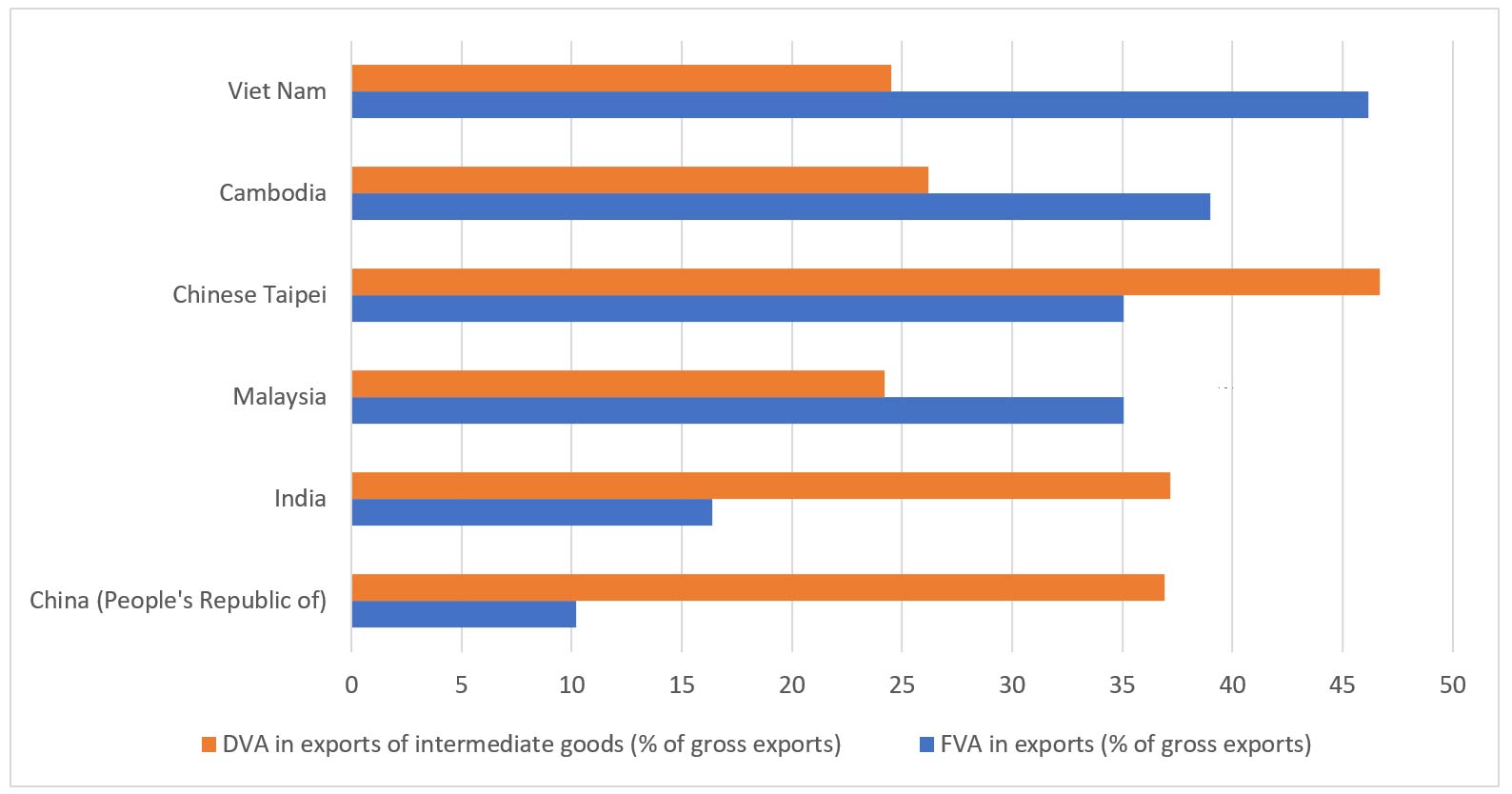 A third contributing factor to India’s low GVC participation is its inability to attract foreign direct investment (FDI) into the manufacturing sector, and subsequent weak links with lead firms (Hoda and Rai 2018, Ray and Miglani 2020). Empirical evidence suggests that openness to FDI is positively associated with backward GVC participation. Other Asian economies, such Vietnam, Bangladesh, and Cambodia experienced growth in both FDI stock and GVC exports at more than 10% annually between 2010 and 2017, while India’s GVC participation witnessed a significant decline in the same period (Mitra et al. 2020).

A large part of Bangladesh’s success in the textile and apparel value chain lies in its successful lock-in of inward FDI from multinational corporations (MNCs), which relocated production units to Bangladesh to take advantage of the abundance of low-cost labour. FDI in the textile sector in Bangladesh also led to the growth of new domestic suppliers of buttons, zippers and fabrics, which increased the competitiveness of Bangladeshi textiles globally (Kee 2015).

Manufacturing suppliers in emerging economies like India can benefit by exporting and importing through GVCs. The exposure to foreign competition and demands of international buyers can create new incentives for Indian firms to innovate, while firms can also learn from the technology and knowledge embedded in capital imports. Simultaneously engaging in both activities further unlocks cost complementarities (Wagner 2012).

Empirical evidence from the Indian manufacturing sector suggests that Indian firms in GVCs have a productivity premium of 13 to 22% relative to non-GVC firms, with the productivity premium from GVC linkages being higher in the automotive, electronics and IT industries, compared to textiles and chemicals (Manghnani et al. 2021). Examining the causal relationship between GVC participation and total factor productivity, in a recent study (Banga 2022a), I find that participating in a GVC and increasing GVC embeddedness boosts manufacturing firm productivity in India. Moreover, GVC linkages are evidenced to increase gross exports, domestic value-added and employment in India (Veeramani and Dhir 2022).

However, the gains from linking are not homogenous: both productivity gains and product sophistication gains are higher for Indian GVC firms that invest in digital capabilities and skilled labour (Banga 2022a, 2022b). Increasing backward linkages have had a negative impact on employment growth in Indian industries, while forward linkages have been found to have no significant impact (Banga 2016).

The time for leveraging GVCs for economic growth in India is now: at a time when the Covid-19 pandemic and US-China tensions have led to a wave of MNC relocations away from China, several policy initiatives are being rolled out by the Government of India to revitalise the manufacturing sector and to increase FDI. The subsequent realignment of GVCs could create new opportunities for India’s manufacturing sector (Baldwin and Tomiura 2020), particularly in sectors of ‘textiles, wearing apparel, leather and related products’ and ‘chemicals and non-metallic mineral products’ industries, where India could be an alternative to China when it comes to imports for the US (Bagaria 2021).

The discussion needs to shift from questions about how India can link into GVCs, to how India can leverage GVCs for economic growth and job creation. There is an urgent need to reorient India’s trade specialisation towards labour-intensive sectors, but this would require a targetted approach, based on traditional sectors and sectors with high participation in GVCs (Veeramani and Aerath 2020).

In capital-intensive sectors, where India has good GVC linkages (such as electronics and hardware) there is a need to promote exports and diversify into activities of assembling of final or network products (Athukorala 2014, Arora and Siddiqui 2020), and specialise in low-skill labour-intensive stages of production. Domestic firms in these sectors need to be incentivised to undertake research and development (R&D) activities, while foreign-invested firms in such sectors need to be incentivised to create more backward linkages within the domestic economy. The domestic integration of manufacturing GVC firms, specifically with the domestic technology/digital sector can facilitate large-scale employment gains in a fast-digitalising economy (Rodrik 2018).

India’s efforts to increase participation in free trade agreements (FTAs) have failed to attract export-oriented FDI from GVC lead firms, and have ultimately benefitted MNCs (Francis and Kallummal 2021). For example, deep and non-strategic trade liberalisation, combined with a liberal FDI policy regime, led to increasing import dependence in India’s electronics sector (Francis and Kallummal 2021). There is a need to develop a coherent industrial policy that aims at increasing DVA within the economy, creating links between the foreign firms and domestic suppliers, and facilitating technological upgrading and spillovers from FDI. A more targetted approach is also needed; the impact of FDI on productivity of an acquired Indian firm is higher when the FDI is from developed countries, particularly from USA or Europe, but spillovers on productivity from vertical forward linkages are higher when the FDI is from Asian countries (Goldar and Banga 2020).

A related point of action is to facilitate the ‘servicification’ of Indian manufacturing– services such as R&D, design services, branding and retail etc. play an essential role in manufacturing GVCs. While India lags other major economies in terms of the services content of its manufacturing exports, the increased use of services input can positively and significantly boost firm-level export intensity5 (Golder et al. 2017) and also sustain their survival in GVCs (Reddy and Sasidharan 2022). Offering support to firms through incentives and subsidies in deploying digital services can significantly increase manufacturing export competitiveness (Banga and Banga 2020).

Lastly, India needs to reorient its trade policy, with emphasis on developing its own GVCs. A potential pathway through which India can accomplish this is by leveraging its growing trade with partners in the Global South to establish its own GVCs, through outward FDI joint ventures that can supply intermediate inputs at competitive rates.

This post is the sixth in a six-part series on 'The good jobs challenge in India'.