Growing through cities in India 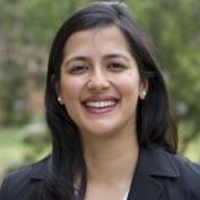 Do cities grow through specialisation or persity? This column measures specialisation and persity for the manufacturing and services sectors in India. It finds that Indian districts with a broader set of industries exhibit greater employment growth. This is particularly true for low population densities, rural areas and unorganised sector, reflecting knowledge flow and the inclusive nature of employment growth due to persity.

Urbanisation and development are tightly linked (Duranton 2013). Developing countries are urbanising at a much faster pace than developed countries. For instance, China’s and India’s economic transformation and urbanisation is happening at 100 times the scale of the first country in the world to urbanise - the United Kingdom - and in just one-tenth of the time.

A key feature of urbanisation is the extent to which it provides productivity benefits for firms. These can be in the form of agglomeration economies - where firms benefit from being in close proximity to other firms in the same industry or close-related industries, or urbanisation economies - where greater density of firms and workers generally provides important inputs to firms (Rosenthal and Strange 2004). Data shows that the effects of agglomeration and urbanisation economies are much stronger in developing countries than in developed economies. In China, the elasticity of wage with respect to employment density1 has been found to be three times larger than in Western countries (Pierre-Philippe et al. 2013). Agglomeration economies are much stronger in India than in US, although they are more localised (Ghani et al. 2011). Overall, these results support the argument that urbanisation has a lot to offer in terms of productivity gains in developing countries.

The developing world is experiencing rapid urbanization, with the number of city dwellers set to reach four billion in 2030 – double its 2000 level. And cities have the potential to generate the majority of new jobs, a process that could drive a four-fold increase in per capita incomes (McKinsey 2010). Most countries have only one chance to get it right, and there is no ‘one size fits all’ recipe. While promising and greatly desired, such urbanisation imposes unprecedented challenges on policymakers - infrastructure investments, coordination, and other policy challenges.

Policymakers face many challenges. Should they focus on a national urban strategy to make development more efficient and more inclusive? Or are they better off focusing on city strategies, with different urban policies appropriate for cities of different sizes, location and stage of development? Should the urban focus be on mega cities or secondary cities? Do cities grow through specialisation or persification?

This debate is, in many respects, a very old question dating back to Alfred Marshall and Jane Jacobs. Marshall (1890) established the field of agglomeration and the study of clusters by noting the many ways in which similar firms from the same industry can benefit from locating together. Glaeser et al. (1992) famously described how Marshall-Arrow-Romer (MAR) type externalities predict that spillovers come from within industries, especially when concentration is high, and can lead to local job growth. Porter (1990) also holds that spillovers emerge from within industries, but only in the presence of competition. Jacobs (1969), on the other hand, pushed back against these perspectives - she emphasised how knowledge flows across industries, and that industrial variety and persity are conducive to growth. While these issues have been widely discussed over the past two decades, our understanding of their practical application to an environment like India is very limited.

In a recent research paper, we measure specialisation and persity for the manufacturing and services sectors in India and compare it to the US (Ghani et al. 2014). Services have been very important for India’s development, and notions of local specialisation and persity extend well beyond the manufacturing sector. We use establishment-level data that comes from the economic censuses of India (example, Annual Survey of Industries (ASI), National Sample Survey (NSS)).

The persity index considers the district’s industrial composition as a whole. It asks, looking across all of the industries for a district, the overall degree to which the district resembles India as a whole. A highly persified district contains an industrial structure that is similar to India’s overall employment distributions nationally.

Indices on specialisation and persification are related to each other but also not redundant. The two indices measure different things – specialisation captures extreme concentration of one industry in one location, while persity looks at the whole picture for a district. It is quite feasible for a district to have specialisation and persity values that are both above average. In the year 2000, about 20% of India’s districts had above-median values on both indices, while 20% of districts had below-median values on both indices. A district can be both specialised and persified. This happens, for example, if it has a large industrial base (relative to the country) in many different industries. For example, Jaunpur district in Uttar Pradesh (UP), which exhibits high specialisation in radio equipment, also has high levels of persity.

It is also important to note that the indices do not directly relate to or build upon other properties of districts (for example, size, income per capita etc.). Both measures are calculated using only the industrial composition of each district, and thus do not build upon other features of the district specifically. This is not to say, however, that the indices are completely unassociated with these properties either. For example, it is increasingly difficult for large districts with lots of employment to have an exceptionally unpersified industrial base, while it is easier for large districts to maintain specialisation in one industry. Thus the connections of our indices to these properties are intriguing.

Which districts have specialised and persified?

Around the time of liberalisation in 1991, India’s manufacturing sector displayed more specialisation and greater spatial (regional) variation in specialisation rates than US. India has converged towards the US baseline in the two decades since then.

Table 1 and Table 2 report the Indian districts showing extreme values for the specialisation and persity indices, respectively. In both tables, we list the highest and lowest average values across the full period (Panels A and B), and the major increases or declines when comparing 2010 to 2000 (Panels C and D). Some examples of highly specialised districts are Lakshwadeep in water services, Darjeeling in paper products and Bhopal in wood products.

Our index values do not depend directly on the size or economic advancement of a region. No more than four of the 12 districts for any of the lists provided are in the same Indian state. Likewise, specialisation and persity are related, but not one-for-one. Only two of the 24 districts that have an extreme average value on the specialisation index in Panels A and B of Table 1 also have an extreme value on the corresponding persity lists in Table 2. Interestingly, some of the major urban areas like Mumbai and Bangalore have undergone the largest declines in specialisation. 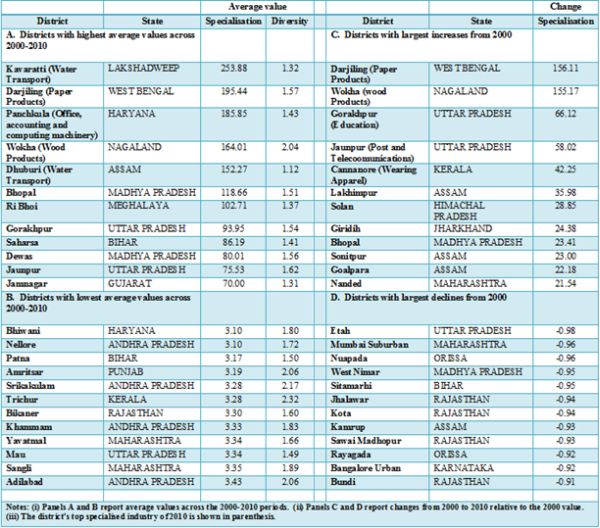 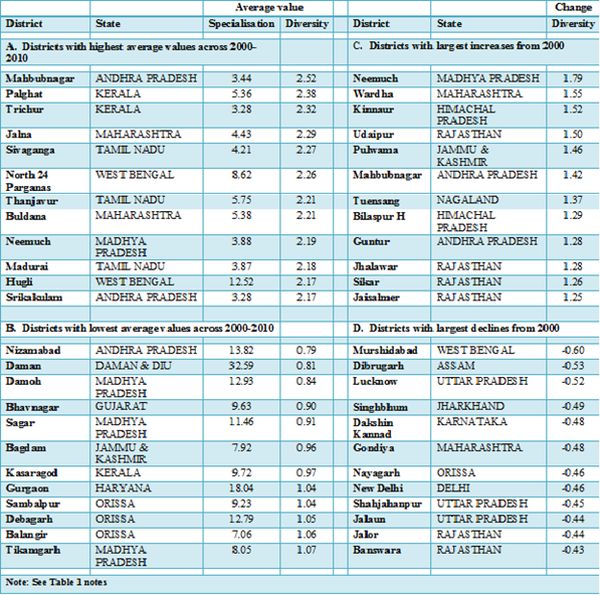 Diversity and growth in Indian manufacturing and services

So what are the key findings?

While one is not able yet to quantify fully all of the channels through which initial persity is linked to local employment growth, our findings suggest that the local reach of persity to job creation is deeper than previously expected. Beyond the standard arguments about persity in nursery cities and innovation, we need to understand the role of persity outside of the most prominent clusters.

India’s economic geography is full of many nuances and twists befitting the rapidly developing country and its present and past policy frameworks. India’s urbanisation confirms the comparable specialisation and persity levels to what is observed in the US. Indeed, India has always had comparable persity levels to the US. Its initial specialisation levels were much higher than those in the US but they converged during our sample period. India also shows convergence in both indices across districts, and then a modest re-expansion in the differences across districts since 2005, the relative roles of modern and traditional industries, and so on.

On the other hand, we have several questions that deserve further attention. An important one is to identify the channels underlying differing trends in specialisation and persification. How has better infrastructure (road connectivity, access to energy) impacted specialisation and persification and different components of economic activity across districts? Do districts that are more specialised benefit from stronger localisation economies arising from the proximity of closely related producers? Do they also suffer from less innovation, fewer new entrants, and more exposed to a greater risk with the rise and fall of specific sectors and technologies? Have the trends in persity and specialisation improved overall efficiency of the urban system as a whole in India? Are they creating good jobs?

Small production units in India operate at a much lower level of productivity than modern production and they survive in spite of the fact that they are so unproductive. Some say that this has to do with urban transportation costs that act as a huge tax on formal labour (Haussman 2014). Do entrepreneurs in the traditional services sector prefer low productivity activities at home rather than pay that huge tax? Do they value the proximity to their family during the day and the saved commute time more than they would value the equivalent formal sector pay? Do women in India also spend a great deal of time to do domestic chores due to lack of access to basic services? For example, they walk miles to get drinking water. Do better roads and access to drinking water reduce the implicit tax on women? Is transport and access to basic services more important than cost of doing business in determining the dynamics of transition from informal to formal sectors, particularly for women-owned enterprises?

These questions are important for developing a better understanding of urbanisation and how it impacts growth and jobs. The common notion to specialise in ‘what one does best’ as the road to economic prosperity and poverty reduction may or may not hold (United Nations Industrial Development Organization (UNIDO) 2012).