Is India's manufacturing sector moving out of cities? 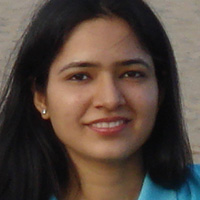 By 2025, India will have more than double the number of city dwellers than the United States has today. Urbanisation, industrialisation, and economic development are expected to go hand in hand as employment shifts out of agriculture, and industrial production is located in cities with their agglomeration economies1 (World Bank 2009). However, while urbanisation has moved ahead at a rapid pace, the pace of industrialisation has slowed down (Henderson 2012). The disconnect between urbanisation and industrialisation raises a number of questions. Is the link between urbanisation and industrialisation more complex than what we had earlier thought? Why are formal manufacturing firms moving out of cities? And why are informal firms moving into cities? Do the agglomeration benefits of density and city differ across formal and informal sectors? Is India’s spatial transformation different?

In a recent paper, we investigate the urbanisation of Indian manufacturing by combining enterprise data from formal and informal sectors (Ghani et al. 2012). Our study suggests that plants in the formal sector are moving away from urban into rural locations, while the informal sector is moving from rural to urban locations.

Although the secular trend for India’s manufacturing urbanisation has slowed down, the localised importance of education and infrastructure have not. Districts with better education and infrastructure have experienced a faster pace of urbanisation, although higher urban-rural cost ratios cause movement out of urban areas. This process is associated with improvements in the spatial allocation of plants across urban and rural locations.

Figure 1a shows that India’s manufacturing sector has become more urbanised, with the share of workers in urban areas rising from 33% of employees in 1989 to 41% in 2005. This pattern of increasing urbanisation is also observed when looking at manufacturing plant counts, although the trend is reversed with manufacturing output. The latter has increasingly moved towards rural areas. 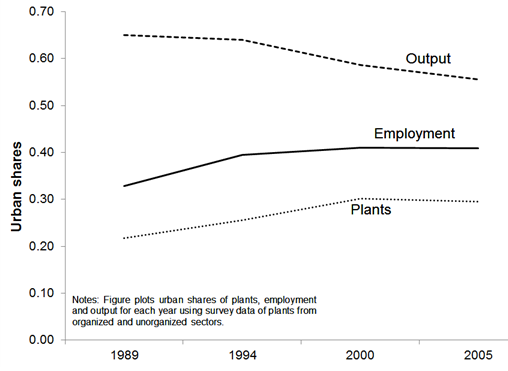 Figure plots urban shares of plants, employment and output for each year using survey data of plants from organised and unorganised sectors. 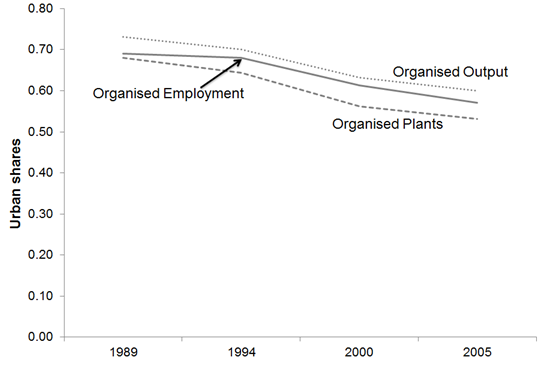 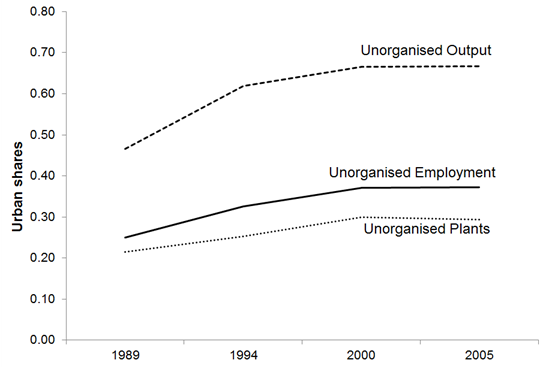 What factors contribute to changes in India’s urban shifts? Table 1 investigates the affect of various district characteristics on urbanisation of employment in India at the district-industry level from 1994 to 2005.

Notes: Estimations consider changes in district-industry employment shares in urban areas for 1994-2005. Positive values indicate an increase across the period in the urban employment share of the district-industry. Estimations report standard errors clustered by district, include state and industry fixed effects as indicated, have 1700 observations, and weight observations by the interaction of log district size and log industry size. + significant at 10% level; ++ significant at 5% level; +++ significant at 1% level. Education level and infrastructure index are either taken from 2001 population census, the wage variables, land intensity are generated from the organized sector surveys using data for the year 2000 , District land area and dummies on built up area are based on the Geographic Information System (GIS) data files. Change in urban population is calculated as the change in urban population from 1991 census to 2001 census.

We find substantial evidence that links greater urbanisation to districts with more educated workforces and better infrastructure levels. We also find evidence that higher costs, or sharper differences in urban-rural cost levels, decrease the rate of urbanisation (columns 3 and 4 in Table 1). These effects are most pronounced in the unorganised sector and before 2000.

Anecdotal evidence suggests that multiple relationships are at play. For example, it is believed that benefits from urbanisation are higher for skilled workers and industries employing skilled workers. Observers note, however, that skilled workers may want to live outside of cities since better amenities are available in surrounding areas relative to cities. Likewise, better infrastructure typically allows high urbanisation levels. But, cities in India often experience some of the largest infrastructure failures, and production of own electricity for organised sector firms is high in both urban and rural settings. Thus, better infrastructure capacity may induce establishments to move to rural locations.

Observers have frequently noted the relatively slow pace of India’s urbanisation (even recognising the differences in urban definitions, as discussed in Note 2 below). Moreover, the movement of organised manufacturing sector plants to rural areas is surprising, given that India’s manufacturing sector is relatively young. Perceived wisdom is that this sluggishness is in part due to the limits imposed by India’s poor infrastructure and weaker education levels, among other factors like strict building regulations. Our work supports these claims. Continued investment in these factors, beyond their direct effects for Indian businesses, will also provide beneficial effects from an urbanisation and spatial allocation perspective.

Finally, our analysis suggests that a larger built up ratio, defined as the proportion of built up area to total area in a district, is associated with higher urbanisation. This relationship is stronger especially for those districts that belong to the 75th – 100th percentile of built up area ratio (columns 7 and 8). A possible interpretation of these results is that land availability is a strong governor of the urbanisation process.2

We take from this set of results that cost factors that slow manufacturing urbanisation in India are definitely present in the labour market and most likely present in the real estate market, too. The evidence further suggests that absolute cost levels and localised urban-rural cost ratios play a role in India’s urbanisation.

The combined effect of multiple layers of poorly conceived and coordinated central, state, and municipal regulations contribute to an artificial urban land shortage in India. As a result, urban land prices are abnormally high in relation to India’s household income, and households consume less floor space than they could afford if the regulatory environment were reformed. In addition, some regulations have a negative impact on the spatial structure of cities.

By unreasonably reducing the amount of floor space that can be built in centrally located areas, and by making land recycling difficult, some regulations tend to “push” urban development toward the periphery. As a result, commuting trips become longer, public transport become difficult to operate and urban infrastructure has to be extended further than what would have been the case if land supply had not been constrained.

Spatial location of plants has implications for policy on investments in education, infrastructure, urbanisation, and the livability of cities. It is very important for policy makers to recognise that much of the urbanisation that is occurring in India is in the unorganised sector. Policy makers should take an inclusionary, rather than exclusionary, approach to the urban informal economy.

Going forward, there should be adequate provision of infrastructure for the informal sectors to develop. Indian cities should find ways to ensure that urban informal livelihoods are integrated into urban plans, land allocation, and zoning regulations; that the urban informal workforce gain access to markets and to basic urban infrastructure services; and that organisations of informal workers are invited to participate in government procurement schemes and policymaking processes. The more that the Indian cities recognise this influx and design appropriate policies and investments to support it, the more effective the policy interventions will be.

This column previously appeared in VoxEU.