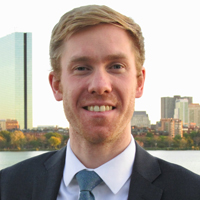 A growing body of evidence supports the idea that intergroup contact can reduce discrimination. However, different types of contact – collaborative or adversarial – may have different effects. Based on experimental cricket leagues in Uttar Pradesh with participation from over 1,000 men from various castes, this article finds that only collaborative interaction across caste lines can successfully reduce caste divisions.

In the small town of Champaner, Gujarat, a group of villagers gathered to practice cricket in advance of an important match. This match was to be against their British rulers. Should they win, their taxes would be cancelled for three years. Should they lose, their taxes would be tripled. As they practiced, an unlikely talent emerged – a spin bowler named Kachra. The only problem? He was an untouchable. The villagers did not want him on the team. We'll not mix with an untouchable. It's unthinkable... To fight the English is our duty, but to mix with a low-caste is like poisoning milk.

This tale of course does not come from the history books, but rather from the iconic 2001 Bollywood film “Lagaan”. As the scene unfolds, our hero Bhuvan persuades the villagers to accept the untouchable as a member of the team, appealing to their common goal: Our only goal is liberation from Lagaan [tax] and welfare of our village... Whether you support me or not, Kachra will play. This film makes a bold claim: that cricket can break down caste barriers. Perhaps this can happen in Bollywood. But can it happen in reality? To explore this, I organised cricket leagues in rural Uttar Pradesh with over 1,000 men participating (Lowe 2018).

Caste discrimination remains common in Uttar Pradesh – 37% of upper-castes openly admit to practicing untouchability (Desai et al. 2011), and villages typically display stark social, marital, and geographic caste segregation. For example, my sample of 14 to 30 year-old men are, on average, roughly twice as likely to have friendships with participants from their own caste category (General, Other Backward Classes (OBC), or Scheduled Castes/Tribes (SC/ST)) than with a participant in general.

A league of their own

With this segregation in mind, I recruited 1,261 men from all castes to participate in eight month-long cricket leagues, playing 640 matches in total.1 They were first randomly assigned to either play in the leagues (800 men), or serve as a ‘control group’ (461 men). Comparing post-league outcomes of these two groups allows me to test whether league participation successfully increases future cross-caste interaction and reduces caste discrimination. 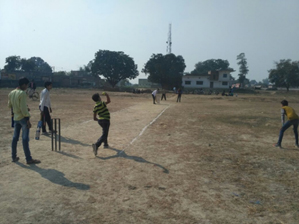 Second, those assigned to the leagues were randomly assigned to teams of five – players then had from zero to four other-caste teammates (where caste here is either General, OBC, or SC/ST). Comparing post-league outcomes for those with more versus fewer other-caste teammates allows me to test whether collaborative contact reduces future caste discrimination. This can be considered a direct test of the key mechanism by which league participation might matter.

Third, teams were randomly assigned to opponents – players then also had variation in the number of other-castes faced as adversaries. Comparing post-league outcomes for those with more versus fewer other-caste opponents allows me to test whether cross-caste contact per se reduces caste divisions, or whether it must be contact of a particular type.

The study has three main findings:

Taken together, these findings suggest that cricket leagues can successfully reduce caste divisions in India, and that they do so by promoting collaborative interaction across caste lines.

I measured outcomes 1-3 weeks after the completion of each cricket league. To measure cross-caste social interaction, participants were asked to scroll through a list of the photos and full names of all other participants in their league, and select those they considered to be friends. In addition, they were asked to choose four others to be future teammates – and they had incentives to be honest, given that they were told that I would later randomly choose some participants to play a bonus match with their team of choice.

To complement these measures, I also designed a novel trading exercise to capture treatment effects on cross-caste economic exchange. For this exercise, all participants were given two sets of mismatched goods: a pair of gloves (both left-handed or both right-handed) and a pair of flip-flops (both left-footed or both right-footed). The mismatching served to create gains from trade, and the participants were given five days to find another participant to exchange with. In addition, half of the sample were randomly given monetary incentives for cross-caste trade – creating efficiency gains from cross-caste interaction. 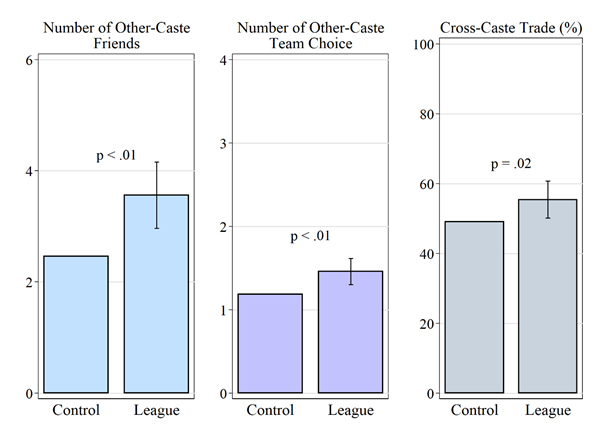 League participation increased cross-caste friendships by 45% of the control group average, to 3.6 (Figure 1, left panel).2 Similarly, the number of other-caste teammates chosen increased from 1.2 to 1.47, an increase of 23% (Figure 2, middle panel). Finally, while 49.1% of goods were traded with someone from a different caste in the control group, 55.4% were traded across caste by those that participated in the leagues – an increase of 13%. These results suggest that the leagues reduced caste divisions – but how exactly?

Finding #2: These effects are largely driven by exposure to other-castes as teammates. 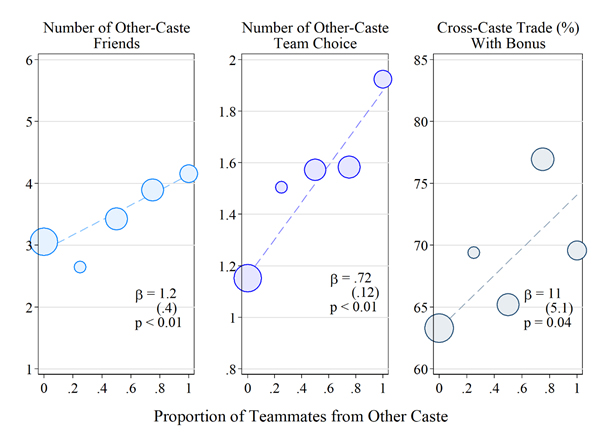 Collaborative exposure also promotes economic exchange when gains from cross-caste trade (that is, the monetary bonus) exist (Figure 3, right panel). The effect is smaller and insignificant for those without the bonus – suggesting that collaborative contact is a complement to, but not a substitute for, cross-caste gains from trade.

Finding #3: In contrast, exposure to other-caste opponents had either null or negative effects (with important qualifications). 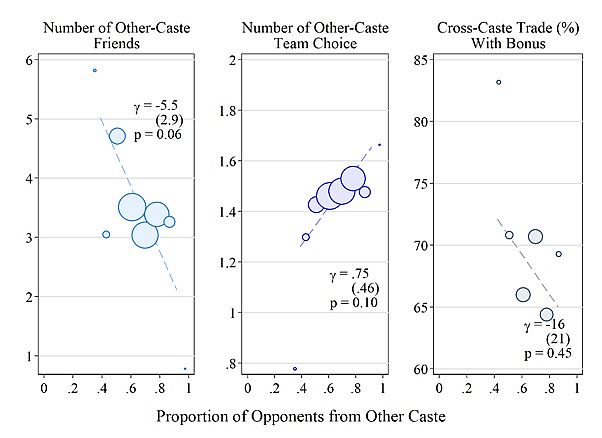 Where collaborative contact promotes cross-caste social interaction, adversarial contact destroys it (Figure 4, left panel) – players end up with fewer other-caste friends if they face more other-castes as opponents, and this result maintains even when I consider only friendships with non-opponents (that is, it is not just that players start to dislike those they play against).

In contrast, there is some evidence that adversarial contact increases cross-caste teammate choice (Figure 4, middle panel). Additional results suggest that this is because adversarial contact reduces statistical discrimination (because players get to see which other-caste players are good at cricket) while simultaneously increasing taste-based discrimination. In particular, the effect of adversarial contact on cross-caste teammate choice falls (significantly) to zero when I consider teammates chosen for a future match in which there are no stakes (that is, much weaker incentives to pick the best players).

Finally, while the effect of adversarial contact on cross-caste trade (for those with the bonus) is negative, it is far from significant. Taken together, these results suggest that it is not cross-caste contact per se that reduces caste divisions, but rather contact that is collaborative.

Two limitations of this study (at least) provide avenues for future work. First, all outcome measures are relatively short-term. Whether effects persist is an open (and important) question, and may be answerable with follow-up surveys.

This experiment complements a growing body of evidence supporting the “contact hypothesis” – the idea that intergroup contact can reduce prejudice (Allport 1954, Rao 2014, Scacco and Warren 2018, Paluck et al. 2017). In this case, it seems that integration per se need not be effective (and may even be detrimental). Rather collaborative integration is what reduces intergroup divisions.

These results imply that integrated cricket leagues may provide a natural and effective means of reducing caste division among young men in India. More broadly, they suggest that integrative programmes in general may have more success when intergroup interaction is structured to be more collaborative. In principle, this could be achieved in integrated schools and firms by providing incentives (monetary or otherwise) for collaboration on homework and projects. Alongside this, incentives that stoke competition (for example, for promotion) should perhaps be avoided.