A plague on all houses

Which is better, India's liberal capitalism modelled on the US or China´s authoritarian state-controlled capitalism? This column argues that dysfunctional governments in both systems are leading to dangerous levels of inequality and triggering populism.


As news of political intrigue, corruption and human rights abuse tumble out of a hitherto tightly managed Chinese system and as a slowdown in its frenzied growth rates seems likely in the near future, the triumphalist story of a “Beijing consensus” on authoritarian state-controlled capitalism looks a bit shabby now. But the other model practiced in capitalist democracies, like the US and India, is looking wobbly, too.

Dysfunctional government and rising inequality have triggered a populism that bodes ill for both systems. The standard measures of income inequality, like the Gini coefficient is extremely high and increasing for China and the US. While India does not regularly collect income-distribution data, occasional estimates suggest an even higher value than in China. In social indicators for the poor, like basic health and education, India and the US are below what is average for their levels of income. The high fees charged in schools and hospitals in China have shut out many of the poor.

Chinese authoritarianism has made it easy for the elite to convert political power into massive wealth and rampant crony capitalism – the 2011 Hurun Report estimates that the 70 richest members of the National People’s Congress has a combined net worth of $90 billion. There is evidence to believe that the too-big-to-fail state-owned companies and politically-connected private firms may have led to a serious misallocation of capital and blocked entry of new firms and exit of inefficient ones, spelling trouble for China’s prospects of going beyond simple catch-up to the technology frontier. An atmosphere of tight control over a free flow of ideas and creativity will also curtail innovations. Without innovations, China cannot sustain its high rates of growth, as the artificially low prices of land and capital for politically favored firms become difficult to maintain and the supply of cheap labor gets exhausted. This is cold comfort for the world’s democracies. Both India and the US, for example, are at the moment suffering from policy paralysis delivered by dysfunctional democracy.

In both countries, a rising inequality has strengthened the forces of reactive short-horizon populism. In India, public resentment builds over corruption at high places as in the recent scandals over allocation of telecommunication spectrum, land and mining rights and over the economic and environmental depredations of the corporate oligarchy. Pressure rises for short-term populist palliative measures in the form of subsidies, handouts and loan waivers.

Even though these measures are taken in the name of the poor, the relatively rich grab most. For example, diesel subsidies meant for tractors and trucks end up going toward luxury cars of the rich, fertilizer subsidies mainly go to the wealthiest farmers, a large part of the food subsidy is diverted by middlemen and non-target groups, and more. The consequent budget deficits, now running up to 8 percent of GDP, often hurt the cause of pro-poor long-term investments in physical infrastructure, including roads, railways or electricity, and in programs of education, vocational training and health care. India’s rickety infrastructure, both physical and social, hobbling its development, is a direct outcome of the democratic malaise of competitive populism.

In the US public anger over lost jobs and foreclosed homes is utilized by the rich to mobilize opinion for income tax cuts and against sensible energy prices or carbon taxes. Some conservatives keep on arguing, against all evidence, that an even lower tax burden on the rich is the key to promoting investment and growth. The budget crisis negates or postpones pro-poor investments, like those in the battered physical infrastructure and the ramshackle US institutions of health care and education.

Another fallout of dysfunctional democracy in both countries is increasing political fragmentation and refusal to compromise on the part of opposing parties.

When more is not better

Inequality is rising in China, India and the US, contributing to dysfunctional government and populism; with the Gini index, 0 represents no inequality, 1 represents maximum inequality (China and India data from Pranab Bardhan; US data from UNDP) 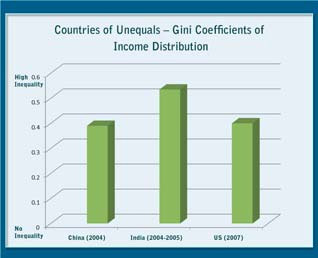 Collective action has always been difficult in India’s extremely heterogeneous and conflict-ridden society. With the decline of the national parties that used to have some semblance of encompassing interests, their dependence on shaky coalitions at the center, with regional parties and fiefdoms demanding accommodation for their special interests in constant day-to-day bargaining, comes at the expense of long-term policy consolidation. The opposition parties block reforms that they themselves advocated while in power. None of this is helped by pressure from outside the political parties: India’s active NGO groups with their narrow single-interest agenda – for example, with hardly any compromise allowed on environmental and land issues where there could always exist some trade-offs. Problems of land acquisition and environment clearance have stalled many development projects.

In the US, also, political parties find gridlock for the cause of narrow ideological and special interests preferable to compromise for the long run, legislative filibusters, and other devices of checks and balances form a chokehold on major policy decisions. The Republican Party’s congressional leadership and presumptive presidential candidate are hobbled by demands of no compromise by the social conservative base, not to mention their super-rich backers. The Democrats are tied by union and special-interest connections. In both India and the US, the 24-hour media sensationalize, amplifying all conflicts, deflecting attention from a larger vision. It’s high time both democracies pay some attention to devising new institutional mechanisms for insulating long-term decision-taking from the wheeling-dealing of everyday politics.

For instance, the US could revise rules of filibuster and congressional committee functions. India could modify through various commitment devices the power of coalition partners in central government to threaten constant support withdrawal if their view is not fully accommodated. For example, a rule change, in line with an existing rule in Germany, has been suggested by which a no-confidence vote in Parliament should not be operative if confidence in an alternative government is not simultaneously affirmed.

Both countries need more independent regulatory and bipartisan policymaking bodies, with some power over the contours of long-run policy, with only periodic supervision or oversight by the clamorous legislatures. In both countries some attempts to increase public financing of elections and reduce the power of big money in funding political campaigns may alleviate the need of politicians to look constantly for funding sources and dance to the tune of special interests.

In general, attempts to reduce the extreme economic inequalities may increase trust in government and make it easier to persuade most people to make short-run sacrifices for the long-run benefits of all.

Difficult though it is, doing something about inequality, corruption and political fragmentation, and installing some long-term commitment devices, may enormously help all political systems, democratic or otherwise. In particular restoring trust in governance and some sense of fairness in the system of wealth distribution will be necessary if the political regimes in China, India and the US are to survive.

Reprinted with permission from YaleGlobal Online, the flagship publication of the Yale Center for the Study of Globalization.