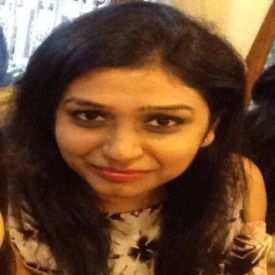 Development trajectories across developing countries vary over time. While some countries have shown tremendous advancements in terms of their economic and social indicators, others are still lagging behind. Historical and cultural differences may partially explain these divergences, but one should not ignore the effectiveness of public institutions and quality of governance as critical factors that contribute to the development process.

There are substantial efficiency differences among rich, middle-income, and low-income countries, both in terms of their allocation and spending of public expenditure on socioeconomic indicators such as education enrolment ratios or infant mortality rates. The differences in the efficiency of public expenditure can be largely explained by per capita income, quality of governance and democratic control, level of spending, and share of federal transfers in subnational government revenues.

The concept of good governance has emerged in recent years as a key to development effectiveness. The variations across countries in terms of development outcomes are better explained if we consider governance processes and institutional dynamics. While increasing the allocation of public resources on health and education may be an easier policy option than an attempt to improve governance, many studies suggest that desirable health and education outcomes – reduction in crime rates, decentralisation, rule of law, control of corruption, participation of civil society, and so on – are not achieved in the absence of better governance (Rajkumar and Swaroop 2008, World Bank, 2004). The significance of effective public spending and sound governance policies is therefore more relevant in developing countries, where the purpose is now to achieve the Sustainable Development Goals (SDGs)1.

Madhya Pradesh (MP), ‘the heart of India’, is the second largest state in the country (by area), with the largest population of Scheduled Tribes (STs) who make up 21.1% of the state’s population. The state has witnessed double-digit growth of 10.2%, on average (at constant prices), and average agricultural growth of 21.7% (at constant prices)2 during 2011–12 to 2013–14. However, according to a study by the National Institute of Public Finance and Policy (NIPFP) the state was identified as “off-track” in achievement of most of the Millennium Development Goals (MDGs)3 4 (NIPFP–UNICEF, 2016). It found a wide divergence in human development achievements across different districts within the state. Such variations across districts need to be understood in order to achieve inclusive development in MP. In a recent study (Bhanumurthy, Prasad and Jain 2018), we attempt to understand what drives such variations across districts.

In order to understand the divergences in human development at the district level, one can hypothesise that human development expenditure or sectoral public expenditure could be a necessary but insufficient condition for bringing about improvements. Several factors, in addition to public expenditure, could explain the divergences in levels of achievement. Any successful public policy intervention, especially in the social sector, calls for robust planning, coordination, good governance, use of information technology, and information flow.

A few studies (UNDP, 2014, Paternostro et al. 2007) have focused on the linkages between public spending and outcomes. These studies found that there was a very limited, almost negligible, link between the two, for two reasons. First, there could be substitution between public and private spending, where increased public provision crowds out private sector provisioning, with negligible net marginal effect. The second reason could be institutional inefficiencies such as weak capacity in the public sector and leakages in public spending. Poor budget management and inefficient use of available funds for productive purposes undermine the impact of public spending on desirable outcomes such as health and education (World Bank, 2004). The efficacy of public spending in enhancing health and educational outcomes could improve if a country has good governance (Rajkumar and Swaroop 2008).

The role of governance

The concept of governance is broader than government. Governance is less focused on State institutions, and more focused on the processes and interactions that tie the State with other non-State actors such as civil society, public, and political representatives (Rosenau 1992, Weiss 2000). While some have argued the possibility of governance without government, what is more relevant is the need for government within governance (Beche 2000). Governance has been analysed both normatively (how should governments behave?) and positively (how do governments behave?) in international public policy for a long time. While there are various definitions of governance (World Bank, 1992, OECD (Organisation for Economic Co-operation and Development), 1995, Planning Commission, 2006-07), here we adopt the United Nations Development Programme’s (UNDP) definition of governance as “a system of values, policies and institutions by which a society manages its economic, political and social affairs through interactions within and among the state, civil society and private sector” (UNDP, 2002). This is also consistent with the approach adopted by the Department of Administrative Reforms, Public Grievances (DARPG) in preparing the governance index (DARPG, 2009). Therefore, here governance is taken as intermediate processes rather than development outcomes.

In this study, in the first stage, we attempt to measure the quality of governance at the district level in MP. For this, we use the manual prepared by DARPG (2009) in the ‘State of Governance: A Framework for Assessment’ report. Here, governance is looked at from five dimensions: political, legal and judicial, administrative, economic, and social. This framework – prepared for state-level analysis – contains a total of 18 components and 123 indicators (of which 75 are primary and 48 are secondary indicators). In this study, which is exploratory in nature with no similar studies existing at the district level, the estimation of the governance index using all the suggested indicators may not be possible, largely due to lack of reliable data. Hence, we consider only 22 indicators that fall across 13 components.

Figure 1 shows the governance index, which is estimated by taking the weighted average (equal weights) of the political, legal and judicial, economic, administrative and social index. The index varies between 0 and 100. There appears to be a wide variation across districts, with Indore being the highest on the governance index at 67.7, and Alirajpur the lowest at 26.1. Indore, Raisen, Bhopal, Dewas, and Jabalpur are the relatively better performing districts, but none of the districts’ index values are above 75, which is considered good governance, pointing to overall poor governance in MP. Districts such as Alirajpur, Anuppur, Satna, and Rewa are found to have overall poor governance.5

In the empirical analysis (Bhanumurthy, Prasad and Jain 2016), we find that, along with public expenditure, governance plays an important role in determining development outcomes. Inter-district variations in achievement of outcomes could possibly be explained by variations in governance. 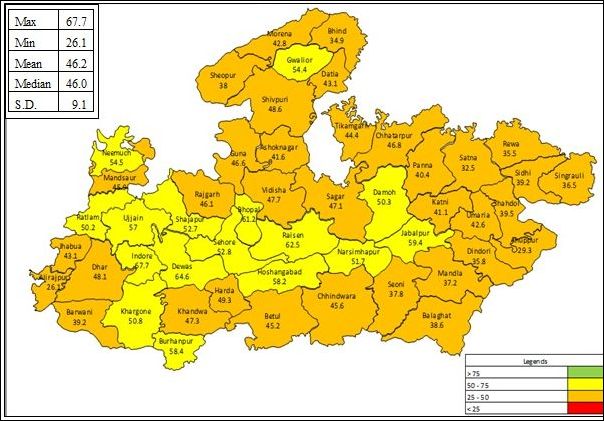 Note: Standard deviation (SD) is a measure that is used to quantify the amount of variation or dispersion of a set of values from the mean value (average) of that set.

Which dimensions of governance should be prioritised? 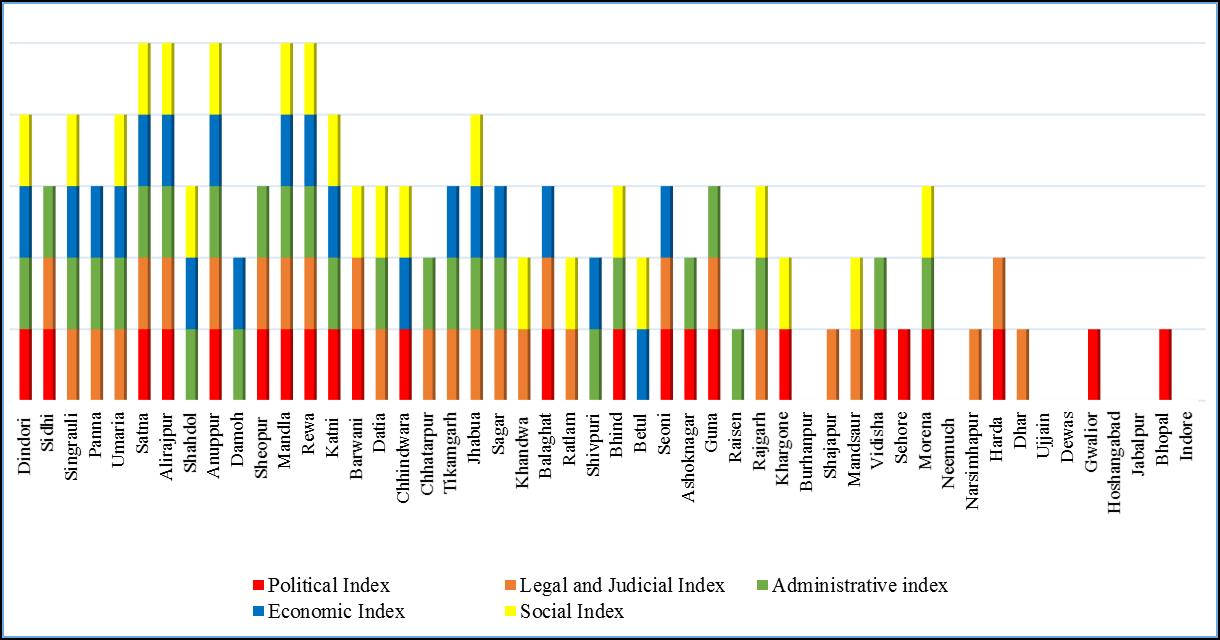 Note: Districts are arranged in ascending order based on MDG achievement index taken from NIPFP-UNICEF (2016). All districts with index value below state average are included.

The study clearly shows that the quality of governance is one of the key factors in explaining human development outcomes. Public expenditure is a necessary but not sufficient condition in improving these outcomes. With a district-level analysis across MP, our study indicates that the government should focus equally on improving the quality of governance and increasing public expenditure on human development. At a policy level, for MP, this study highlights some key priorities in terms of the dimensions of governance for each district, which if improved, can lead to an overall improvement in their human development outcomes over a period of time. A focus on governance and prioritisation of particular dimensions of governance at the district level can not only help the state of MP but also other states in the country to formulate an effective strategy to improve human development, especially with the change in targets from MDGs to SDGs.

This analysis is part of a larger study, ‘Divergences in Human Development Outcomes in Madhya Pradesh: The Role of Fiscal Policy and Governance’, sponsored by UNICEF, Bhopal. The authors thank H.K. Amar Nath and Shiney Chakraborty for their contributions to the larger study. They also thank the anonymous referee for valuable comments. The views expressed here are those of the authors alone.