A campaign to end malnutrition in Bihar 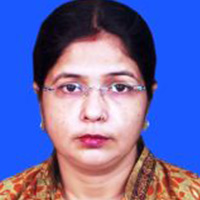 About 55% of 0-3 year old children in the state of Bihar are malnourished. In this article, Hena Naqvi, State Programme Officer at the Department of Social Welfare, Government of Bihar, describes an ambitious campaign launched by the government in October 2014 to reduce child malnutrition in the state to 30% by 2017.

Years of multidimensional backwardness of Bihar was confirmed by the Committee. With critical indicators1 like 54.4% poverty ratio, 42.73% female literacy, 61.1 infant mortality rate (IMR), and 916 sex ratio, Bihar was bound to be a part of the list of ‘least developed states2.

An area of serious concern is the high malnutrition rate in the state. According to the consolidated revised National Rural Health Mission (NRHM) report 2012-13 for Bihar, around 80% of children below five years of age in Bihar are malnourished. The National Family Health Survey-III (NFHS-III, 2005-06) reports that 50.1% of children below three years of age in the state are stunted (low height-for-age), 32.6% are wasted (low weight-for-height) and 54.9% are underweight (low weight-for-age). The overall malnutrition rate for this age group is about 55%. The NRHM report also says that malnourishment in women in the reproductive age group (15-49 years) has worsened in Bihar (increased to 68.2% in 2012 from 60% in 1998). Hence, Bihar seems to be trapped in a vicious cycle of malnourished women and children.

Figure 1. The vicious cycle of malnutrition among women and children 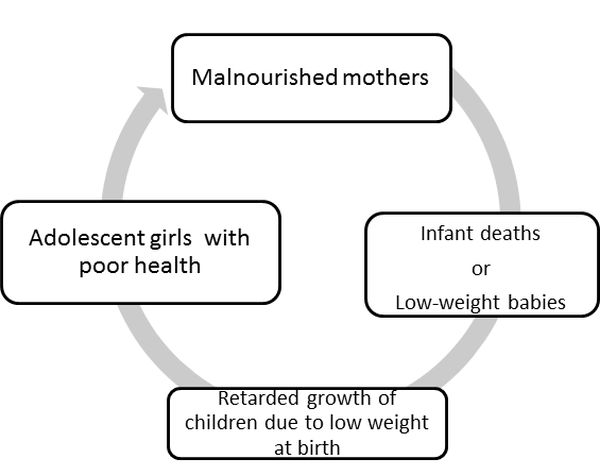 To address the grave issue of malnutrition, the Department of Social Welfare, Government of Bihar has initiated a campaign called ‘Bal Kuposhan Mukta Bihar’ (BKMB). Launched on 11 October 2014 by former Chief Minister Jitan Ram Manjhi, BKMB seeks to bring down the malnutrition rate in the state, and hence address IMR and related health problems in the long run. As per the planned strategy, the programme aims to reduce child malnutrition (below 30% for 0-3 year olds) from the current status by the end of 2017.

Designed on the pattern of the Pulse Polio Campaign, BKMB takes care of every minute aspect and all the strategic components of addressing malnutrition.

The five Cs: A multi-pronged strategy to end malnutrition

A multi-pronged strategy has been devised to achieve the ambitious goal of reducing malnutrition. It includes five ‘Cs’, namely communication for behavioural change, capacity-building, community’s access to tangibles and intangibles, community participation, and collective approach.

The five Cs are directed towards covering seven priority interventions under the campaign: colostrum feeding (within one hour of birth); exclusive breast feeding (up to six months of age; without even a single drop of water); appropriate and timely initiation of supplementary feeding from six months onwards; prevention and cure of childhood illness; use of safe drinking water (boiled and filtered); hand-washing and hygiene practices; and regular growth monitoring of children in the age group of 6-36 months. 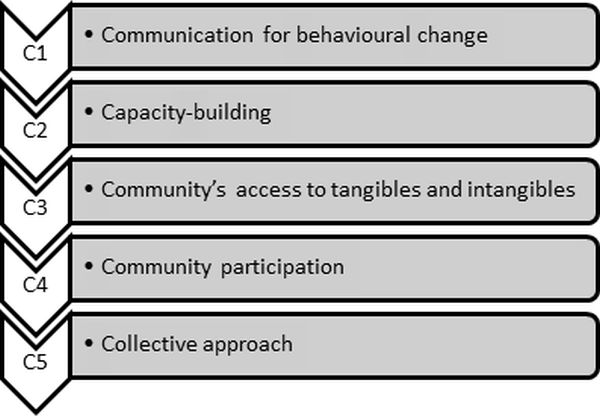 In the short run, the communication component of the programme aims at informing, sensitising and mobilising the community towards positive health and nutrition practices. Screening of a short film on care of nutrition and hygiene of children4, movement of an awareness van branded as ‘Jagrukta Rath’, street plays, songs (in local language), print and electronic mediums, hoardings, banners, posters, booklets, stickers, mobile phone and social media (Facebook, Twitter, You Tube) have been chosen as the mediums to convey messages on reducing malnutrition. The long-term aspects include promotion of social forestry (teaching the community to cultivate nutritious fruits and vegetables under community forestry)through MNREGA (Mahatma Gandhi National Rural Employment Guarantee Act) and the Department of Agriculture, inclusion of nutrition in school and college curricula, orientation of voluntary organisations, panchayati raj institutions (PRIs) and legislators on nutrition, and establishment of a ‘nutrition museum’5. Such innovative steps have the potential of reducing malnutrition indirectly in the long-run. Thus, a combination of various mediums is used under the communication component of the campaign. 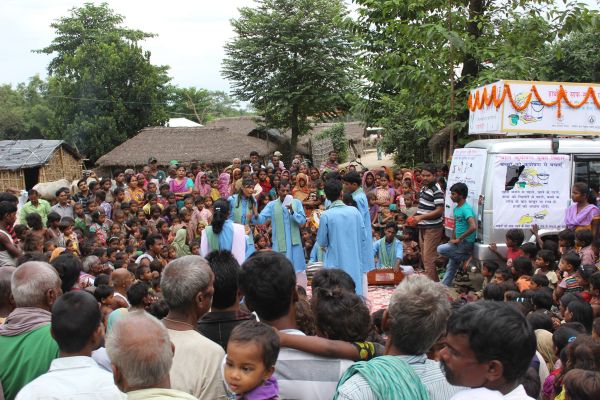 The capacity-building component of the campaign includes training the ICDS officers and field functionaries on the themes of BKMB. Educating mothers on nutrition for reducing malnutrition at the household level is another significant aspect of this component. This is done through periodic household visits by service providers such as Anganwadi workers and ASHA (Accredited Social Health Activists)6 workers who talk to mothers on issues related to malnutrition. Design of dialogue with mothers includes tools of inter-personal communication and demonstration.

The third ‘C’ - community’s access to tangibles and intangibles –includes provision of a bowl and spoon to every registered child (registered at AWCs) in the age group of 6-36 months (to facilitate complementary supplementary feeding), two eggs per week to the beneficiary children (3-6 years age group) of pre-school education component of the Anganwadi services, water purifiers at AWCs, fuel for boiling water to every AWC, weighing machines for growth monitoring, and uniforms to the children registered at AWCs. The intangibles include information on colostrum feeding, exclusive breastfeeding up to the age of six months, supplementary feeding to children from six month onwards, balanced diet to pregnant women/ lactating mothers, hygiene/ sanitation practices, safe drinking water management and preventions and cure of childhood diseases. 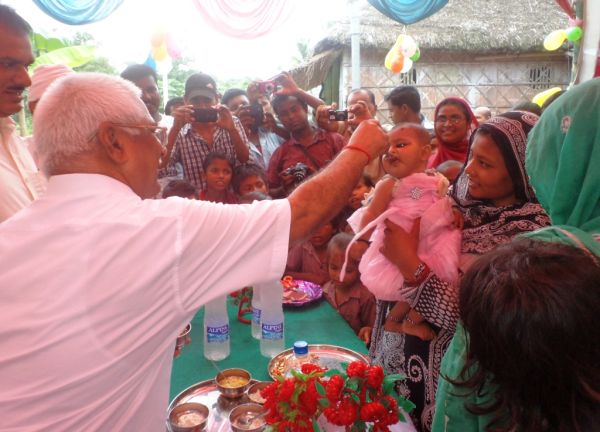 If implemented successfully, the campaign is bound to break the vicious cycle of malnutrition and facilitate the emergence of healthy future generations.