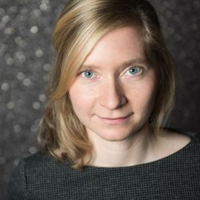 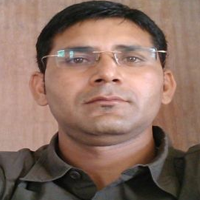 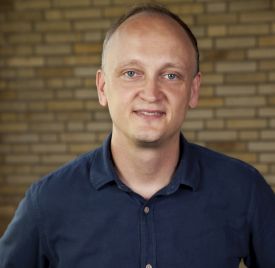 Micronutrient malnutrition is a major risk factor for more than half of the daily under-five deaths in India. It leads to iron-deficiency anaemia, which especially affects pregnant women, and young and adolescent children. Based on an intervention in Bihar, this article estimates the impact of supplying double-fortified salt in mid-day meals in schools on anaemia as well as cognition and educational outcomes of second-grade children.


Micronutrient malnutrition remains a significant policy challenge in India as micronutrient deficiencies are a major risk factor for more than half of the daily under-five deaths in the country. Micronutrient malnutrition is caused primarily due to lack of iron, vitamins, iodine, zinc, etc. Deficiency of iron due to poor diet quality leads to iron-deficiency anaemia (IDA). Although IDA affects members of both sexes and all age groups, pregnant women, and young and adolescent children are at higher risk of being anaemic. Micronutrient deficiency in early childhood also affects human capital formation including education, cognition, and adult health (Currie and Vogl 2013).

Among possible solutions to combat anaemia (food fortification, micronutrient supplementation, dietary diversification), salt fortified with iron could be an effective strategy in a resource-poor setting of Bihar. This is because salt is universally consumed irrespective of location, socioeconomic status, and food preferences. However, whether fortified salt should be delivered through the market (village shops, PDS (public distribution system)) or non-market institutions (schools, health clinics) remains an open question as the empirical evidence on the effectiveness of different types of delivery channels to supply fortified salt is far from settled (Banerjee et al. 2018, Berry et al. 2017). In a recent study conducted in Bihar, we estimate the impact of supply of double-fortified salt (DFS) – fortified with iron and iodine – in mid-day meal preparation on anaemia as well as cognition and educational outcomes of second-grade children in Bihar (Kramer et al. 2018).

The evidence on the efficacy of DFS in improving haemoglobin and in reducing IDA among school-age children is mixed and unclear. Two recent studies conducted in India were unable to find a significant impact of DFS on anaemia, cognition, and educational outcomes (Banerjee et al. 2018, Berry et al. 2017). In contrast, another Indian study conducted among 6-12 years old school children found a significant increase in haemoglobin level as a result of DFS intervention.

The treatment in our project was subsidised supply of DFS, to prepare mid-day meals for one school year. We purchased the DFS, Tata Salt Plus, from a large Indian private company (Tata Salt) and the salt was fortified with 0.86 mg of iron per gram of iodised salt. Treated children received at least 3.5 mg of iron per mid-day meal, which accounts for one-third of the daily iron requirement. On average, treated children received 17.5 mg of iron per week from our DFS intervention (we assumed 80% attendance).

We randomly enrolled 108 schools in the study, and then randomly assigned half each to the ‘treatment’ and the ‘control’ groups. The study was conducted in two blocks, Kako and Modanganj in Jehanbad district in Bihar.

We conducted a follow-up survey after 12 months to measure the impact of DFS on haemoglobin level, anaemia, cognition, and educational outcomes.

In order to isolate the causal impacts, we use difference-in-differences – a method that basically compares the pre- to post-intervention change in the outcome variables for the treated schools relative to the control schools.

Our findings show statistically significant impacts on haemoglobin and anaemia among school children. The DFS supply for mid-day meal preparation increases haemoglobin levels by 1.2% and reduces prevalence of any form of anaemia by 20% among the treated children (see Figure 1).

The reduction in mild anaemia is 6 percentage points or approximately 30%; the point estimate for moderate or severe anaemia is also quite large and negative (13 percentage points) but the effects are not statistically significant. Some of the prior studies reported similar effect size: Nair et al. (2013) found a reduction in anaemia by 20% in India; Chong et al. (2016) reported an effect size of 34.5% in Peru; while Banerjee et al. (2018) and Berry et al. (2017) were unable to find any significant impacts of DFS on anaemia in India. 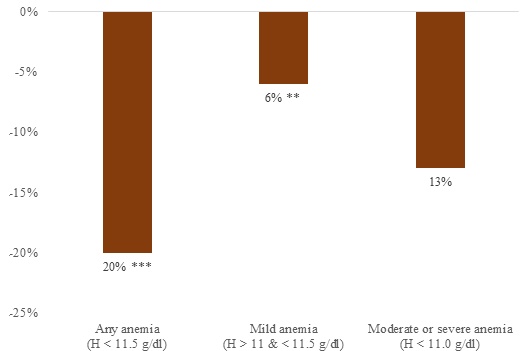 Even though the DFS treatment decreased the prevalence of anaemia by 20%, on average the one-year intervention of 0.86 mg of iron per gram of salt was not (yet) sufficient to improve the cognitive ability of second-grade students. The cognitive index increased by 0.03 standard deviations1 due to the treatment but the results are statistically insignificant (see Figure 2). The math and reading scores increased by 0.13 and 0.11 standard deviation, respectively, but these are not statistically significant.

Figure 2. Impact of double-fortified salt on cognition and test scores 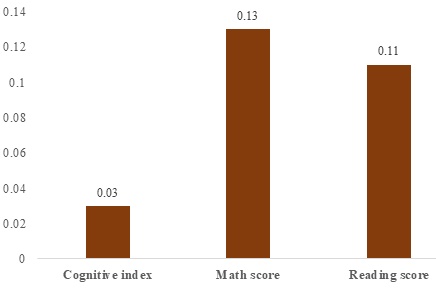 Notes: All outcomes are normalised with reference to the baseline average in the control group and are reported in standard deviation.

The cost of one-year treatment is approximately US$ 4,887 and the treatment reached about 14,000 children, implying the per-child cost of US$ 0.36. Applying the treatment effect in Figure 1, we calculate that 18 cases of anaemia were averted with an expenditure of slightly more than US$100. We further calculate that the cost of per disability-adjusted life years is less than the per capita gross national income of Bihar and hence, the DFS intervention is very cost-effective, as per the World Health Organization (WHO) definition of cost-effectiveness.

Our results indicate that the DFS intervention in the mid-day meal preparation had a positive impact on haemoglobin levels and significantly reduced iron-deficient anaemia among second-grade children in Bihar. However, these health gains only lead to positive impacts on measures of human capital with very high school attendance and therefore very regular daily exposure to the treatment. The impact on cognition and educational outcomes in all children may take longer than a year to fully develop. The school-based DFS intervention has the potential to reach a large proportion of primary-school children at low marginal costs and can be an effective channel to supply micronutrient to school-age children.

Although Government of India has mandated DFS use in mid-day meal preparation, the enforcement of this policy is abysmal on the ground as not a single school in our sample in Bihar was using DFS. The findings support the importance of targeted school-based intervention, especially mandatory use of DFS in the mid-day meal, to improve children’s health and their human capital formation in the long run.