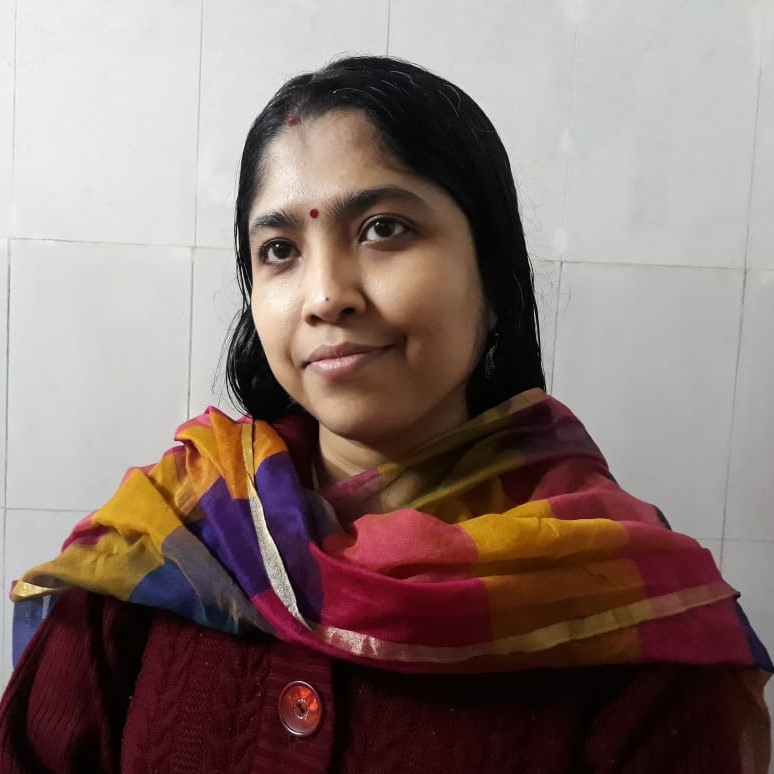 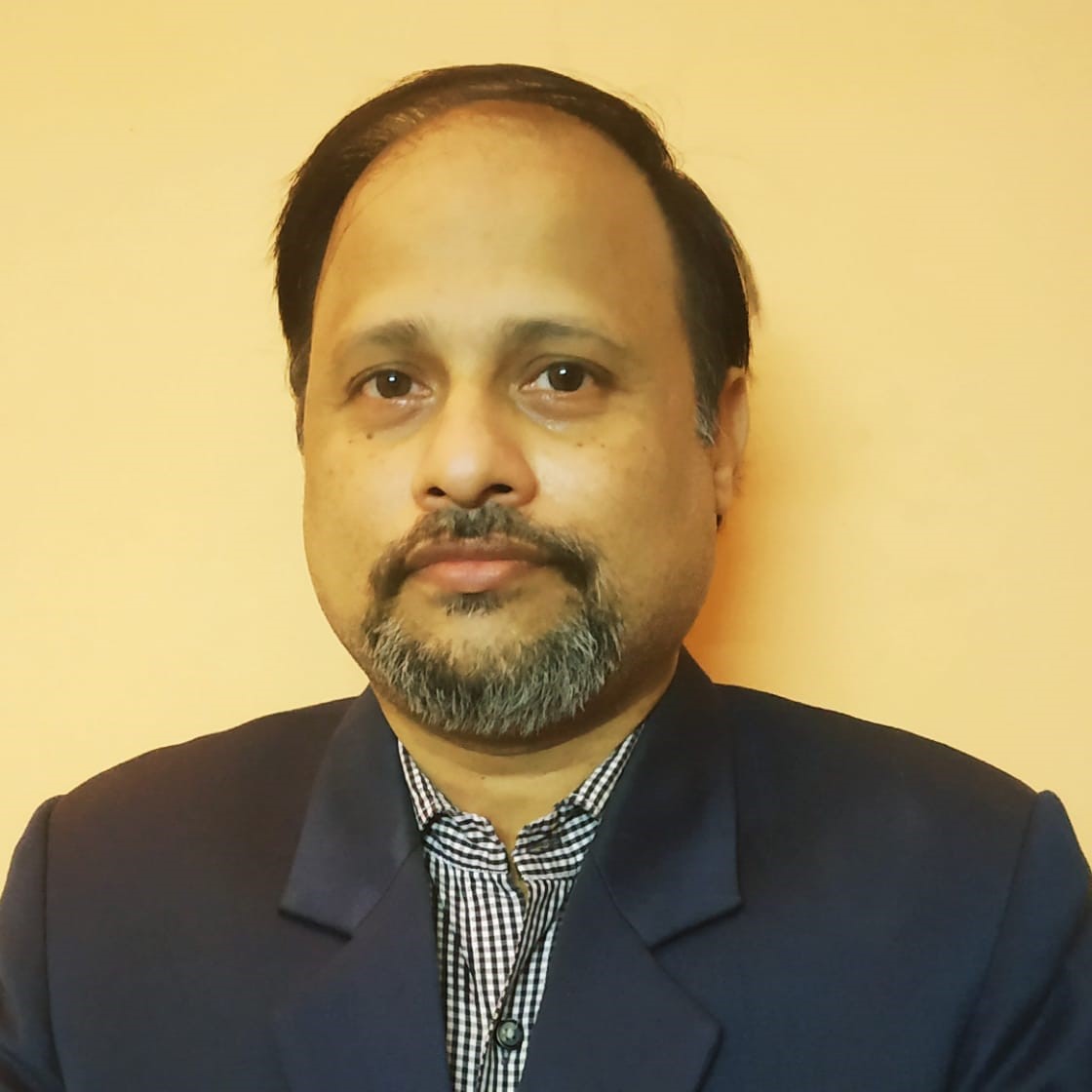 The nationwide lockdown – imposed in March 2020 to contain the spread of Covid-19 – left large sections of migrant workers in a precarious position, with livelihoods lost, and no means of public transport to get back home. This note presents findings from a survey of over 1,600 households in 12 villages across seven districts of the state of Bihar - a major source of migrant workers – to assess the impact of the pandemic on their lives.

Evidence on the massive impact of the Covid-19 pandemic on livelihoods – apart from the direct impact on health and lives – in India has been building up. The official national statistics have been largely limited to the quarterly GDP (gross domestic product) statistics, and they fail to convey the severity and differential nature of impacts on different sources of livelihoods among vulnerable populations. Evidence on the latter has been amassed through a large number of Covid-focussed surveys and micro studies1.

As part of this effort, we conducted a study2 to gather evidence on the experience of rural households in the state of Bihar during and following the first wave of the Covid-19 pandemic that began in March 2020 (Datt et al. 2021). The study focussed on how different sources of households’ livelihood were impacted and how far they benefitted from the announced measures of government support.

The survey was conducted between October 2020 and January 2021 with a sample of 1,613 households in 12 villages across seven districts of Bihar3,4. Impact was assessed by comparing a household’s pre-Covid-19 status5 with their situation since Covid-19 began.

The nationwide lockdown announced on 24 March 2020 with a four-hour notice, left large sections of migrant workers in a very precarious position with their livelihoods lost, and no means of public transport to get back home. Our survey reveals that the livelihood impacts were pervasive. Almost all the migrant workers we surveyed (94%) reported that their employment and earnings were affected by the pandemic. We elaborate on the different forms of this impact below.

There were multiple, overlapping factors that contributed to the disruption of the employment of migrant workers. About 70% of them reported being impacted by worksite closure, or employment being terminated or suspended by the employer. Nearly three-quarters also reported being unable to work due to travel restrictions. Nearly all (more than 94%) surveyed migrant workers report fear of infection as a factor contributing to them stopping work (Figure 1). 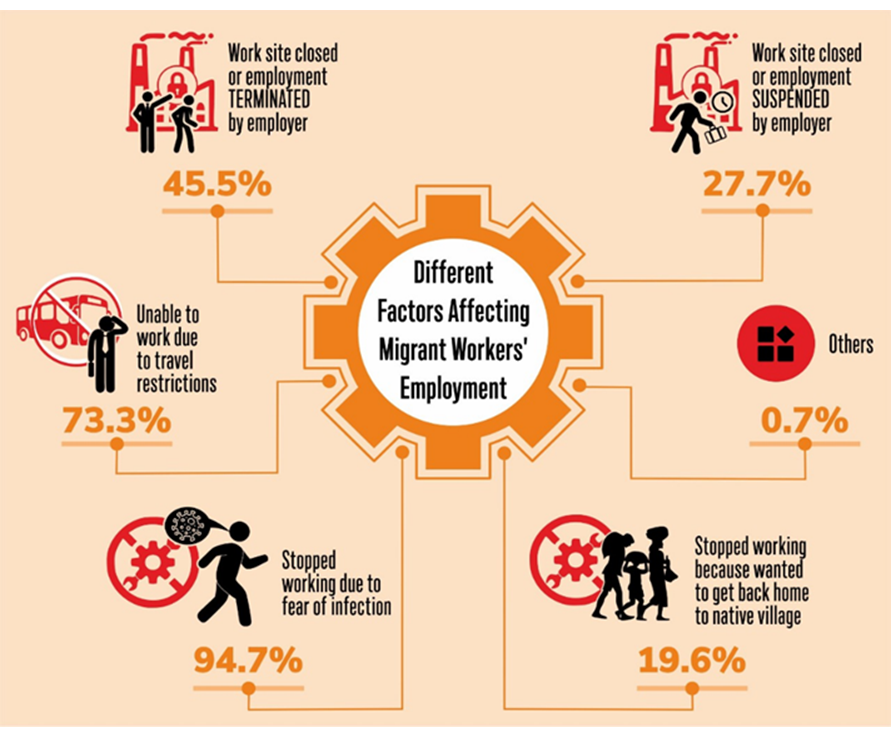 Experience of migrant workers who stayed in destination areas

Over two-fifths of migrant workers surveyed stayed in the destination areas where they worked. Of those who stayed in the destination areas6, about 9 out of 10 workers reported loss of workdays, and 94% reduced their remittances back home. The average fall in remittances was more than 50%, significantly adding to the income shock faced by their households in the native locations (Figure 2).

More than 25% of the migrant workers who stayed in destination areas also reported a decrease in their remuneration rates by about a quarter on average (Figure 3).

Figure 2. Impact on remittances of those who stayed in destination areas (%)

Figure 3. Loss of wages among stayers (%) 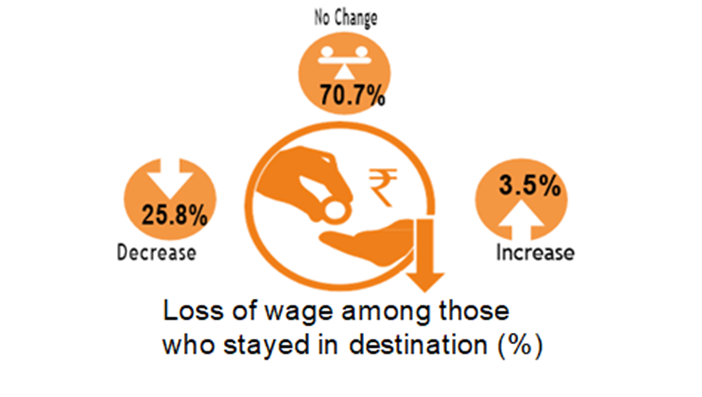 More than half of migrant workers returned to the native village with the disruption of work in destination areas. A typical worker spent Rs. 3,000 on the return journey. Our survey finds that while migrant workers started trickling back to their native villages in February 2020 itself, return migration accelerated during March through May. Migrant workers who returned used more than one mode of travel to get back to their native village. Only a little more than one-fifth of the returnees made use of Shramik (workers) trains7 for their return journeys (Figure 4). Indicative of their desperate situation under lockdown conditions, more than a quarter of them made at least a part of the journey on foot, often covering very long distances.

The low proportion is testament to the fact that there were significant delays in the organisation of these trains, by which time many migrant workers had already left the destination area by alternative means. In addition, there were only a few of such Shramik trains, and the whole operation was poorly managed, which severely limited access.

In addition to the out-of-pocket cost of the return journey, about 10% of the returning migrant workers also had unpaid wage arrears when they left.

Figure 4. Mode of transport used by migrant workers while returning 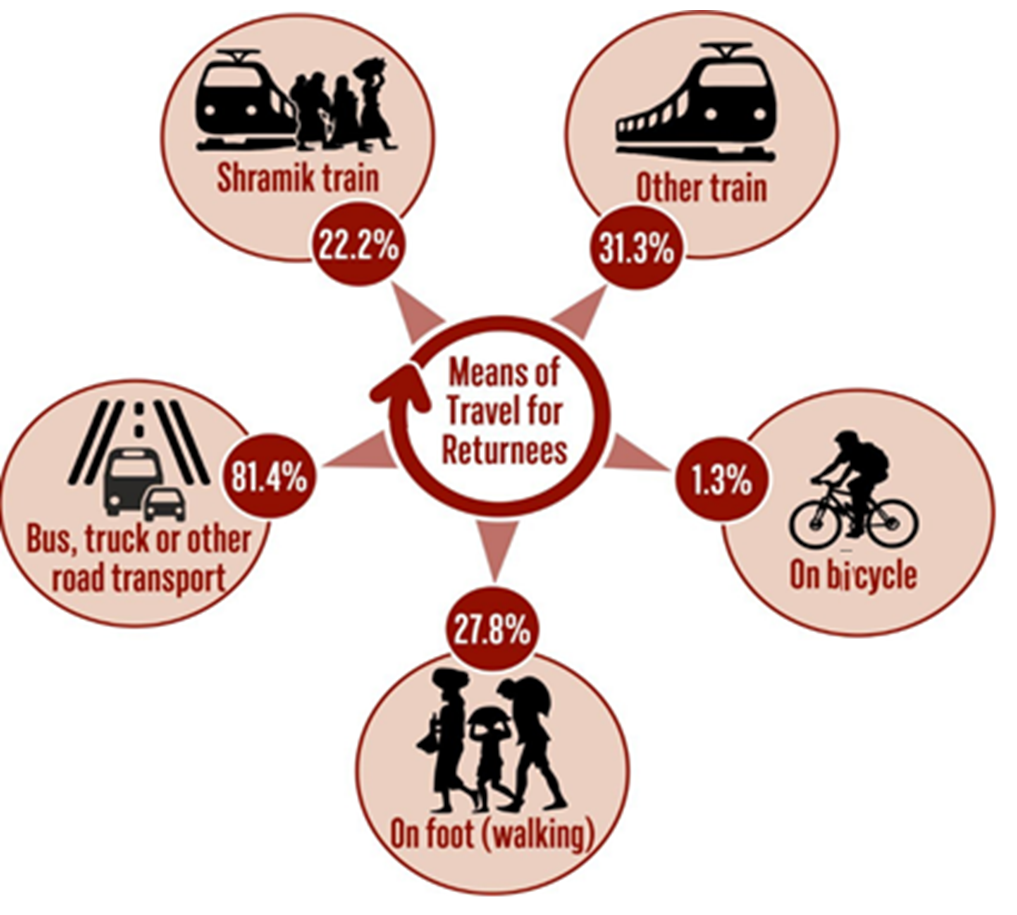 Among those returning to their village, the typical worker lost more than 40 days of work in the period before they returned to the village. Less than two-thirds of the returnees found alternative part-time work around the village, and for those who found work, this work was on average only about 3-4 days per week. A mere 4% of the returnees found work on projects under the Mahatma Gandhi National Rural Employment Guarantee Act (MNREGA)8 (Figure 5).

Figure 5. Percentage of returnees still in the village, and type of job opportunity 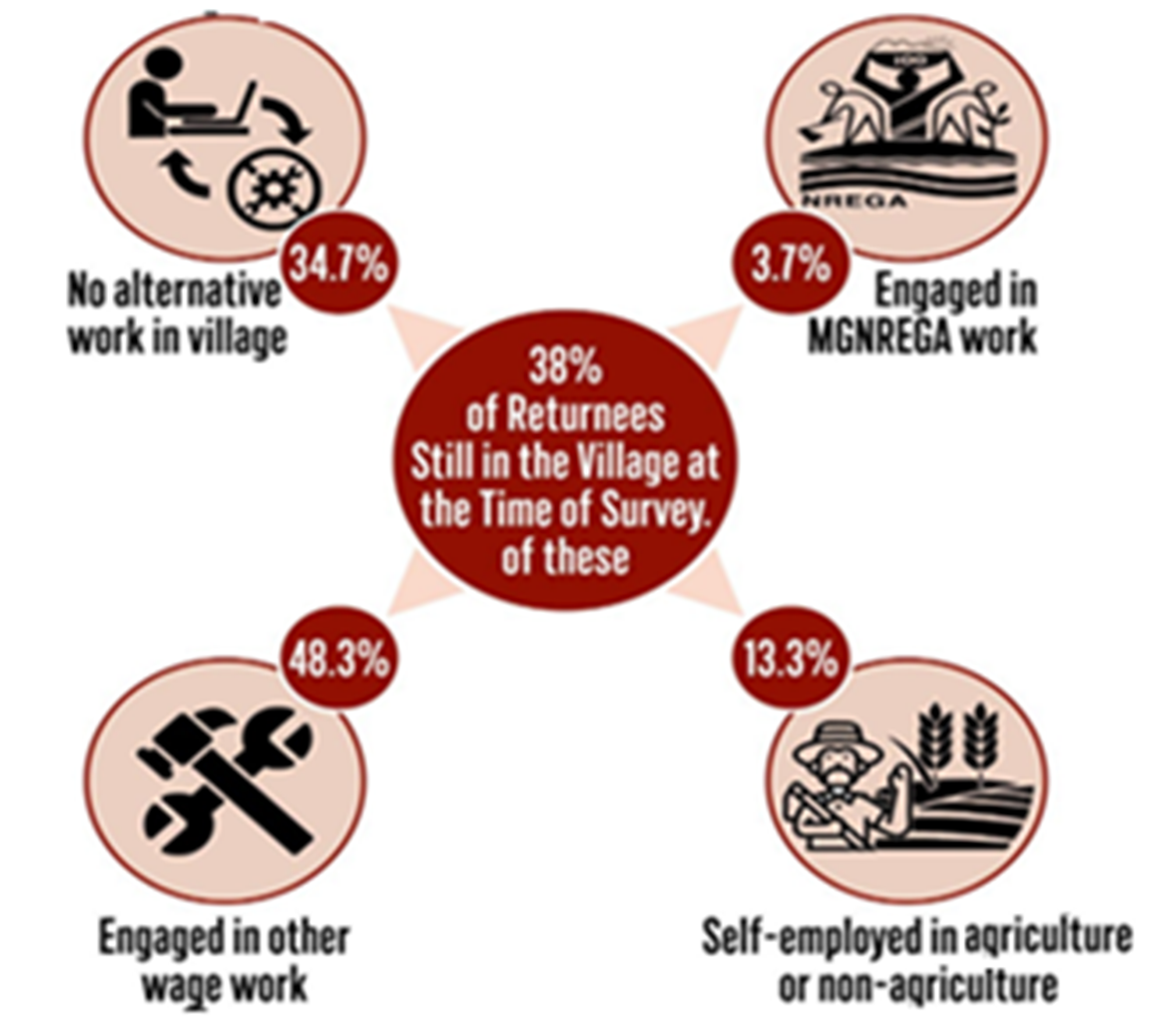 By the time of the survey, majority of the returnees had gone back to destination areas. But this was not before having spent a significant amount of time in their native village. The typical migrant worker who went back to their destination areas spent 4-5 months in the native village, indicative of a significant loss of potential work opportunities and income. In addition, at least about one-fifth of those who had gone back to destination areas were still to resume work at the destination sites at the time of the survey, and almost one-fifth of those who had resumed work at destination sites reported earning less than what they used to before reverse migration.

The pandemic has highlighted the complete lack of social protection for migrant workers who are the backbone of key sectors of the economy including construction, manufacturing, and agriculture. Migrant workers and the income they earn are also critical to the welfare of a large number rural households who rely on remittances they send. The lack of portability of safety nets such as subsidised food through the Public Distribution System9, and the absence of social insurance mechanisms such as MNREGA in urban areas stand out as key areas for future social policy reform (Drèze 2020).