The Mahatma Gandhi National Rural Employment Guarantee Act, India’s flagship programme that guarantees 100 days of minimum wage employment to rural households, has come under attack for pushing up the wages demanded by hired hands in agriculture. This column argues that most of these attacks fail to account for changing productivity in agriculture and the consequences of this for agricultural wages.

Throughout the debate over the costs and benefits of the Mahatma Gandhi National Rural Employment Guarantee Act (MNREGA), one of the most controversial and unsettled issues is its effect on agricultural labor market. Last year the union agriculture minister, Mr Sharad Pawar, even went to the extent of recommending a 50% subsidy to farmers in wage costs due to increases in real (inflation-adjusted) agricultural wages, linking the increase in wage to MNREGA. The resounding echo in the academic circles also seems to support the idea of a rise in real casual laborer wages due to MNREGA, with estimates ranging from 4% to 8% (Berg et al 2012, Azam 2012, Imbert and Papp 2012). Rising rural agricultural wages

Table 1 shows the rising real wages, measured by the compounded annual growth rate (CAGR), of men and women in agriculture across the major Indian states for the five-year periods of 1999-2004 and 2004-20091 . The latter is the period in which MNREGA was implemented across districts in India with all the districts covered by 2008-2009. If the observations and results of the previous studies are correct, the five-year period from 2004-2009 should have witnessed a higher growth in real wages as compared to the previous five years. 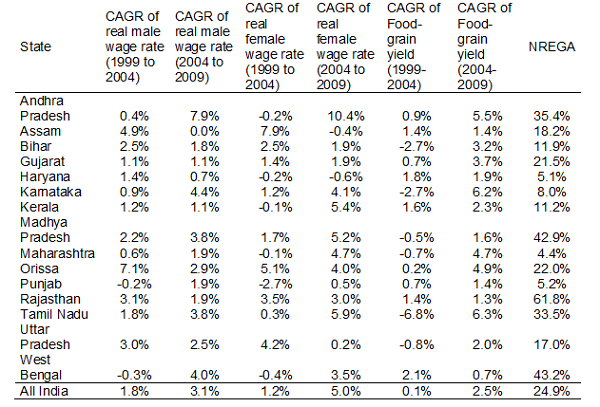 This indeed is shown in the data, with the annual wage growth rate for men working in agriculture being 3.1% in the most recent period compared with just 1.8% in the previous period. The difference is even starker for women at 5% annual growth for 2004-2009 and a meagre 1.2% for 1999-2004. The states that witness the largest rise in real agricultural wages for men are Andhra Pradesh, Karnataka, Madhya Pradesh, West Bengal and Tamil Nadu. In addition to the above states, Kerala and Maharashtra show a steep increase in women’s real wage growth rates.

Rise in wages and agricultural productivity

But these figures cannot be analysed in isolation. They must be looked at under the light of changing agricultural conditions across the two periods. An often-used indicator for agricultural productivity is growth in yield rates over time. Table 1 also shows the growth in three-year average of food-grain (cereals and pulses) yields using data from the Ministry of Agriculture across the same periods. What is striking is the increase in food-grain yield in 2004-2009 of 2.5% per year while it was at a record low level of 0.1% per year during 1999-2004. Since growth in agricultural yields is an important factor affecting the growth in agricultural wages, this must be accounted for before drawing any conclusions about the effect of MNREGA on agricultural wages.

To compare the above figures with the effectiveness of MNREGA implementation across states, the last column of Table 1 shows percentage households reporting to have done some work in MNREGA in the National Sample Survey 2009. As this is household reported data, it is likely to be more reliable than the official records of the government. The top five states in terms of MNREGA work are Andhra Pradesh, Madhya Pradesh, Rajasthan, Tamil Nadu and West Bengal. This is in line with many previous reports that laud the MNREGA implementation in these states. Of these Rajasthan has not shown any spectacular growth in real wages. And of the remaining four states, Andhra Pradesh and Tamil Nadu have also shown more than 5% per year growth rate in the food-grain yields from 2004 to 2009. In Madhya Pradesh the net impact has been pronounced only on women’s wages. Karnataka on the other hand, has witnessed a larger real agricultural wage growth despite the percentage households that have received MNREGA work in the state being abysmally low at 8%. This increase seems to have been backed by a higher growth rate in food-grain productivity in the state at 6.2% per year.

The above data throws light on a few aspects.

The National Sample Survey (NSS) rounds of 1999, 2004 and 2009 are the source of agricultural wage data and have been adjusted for the cost of living for agricultural labourers.