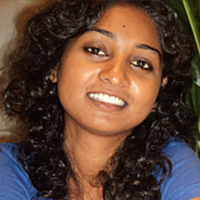 In conversation with a Prime Minister’s Rural Development Fellow, Bahrin Bhuyinya, a resident of the Khunti district in Jharkhand shares her story. While she feels that the village has significantly benefitted from government schemes in the past decade, it is the increased involvement of women in the village panchayat that has truly empowered Bahrin and others like her. This is the second narrative in our three part series on what development means to women in some of the most remote parts of the country. 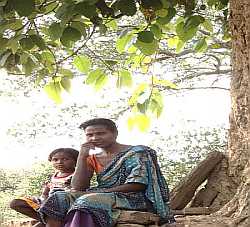 The village of Kenbanki is nestled in the foothills of dense forest hills of Khunti district of Jharkhand and is known to be a naxal prone area. It is populated by the ’Munda’ tribal community and a vast majority of the population is made up of marginal and small farmers who have few opportunities for full-time employment in their fields. As it is a rain-fed area, the agricultural activity is seasonal and ceases altogether in winter. Hence many of the villagers eke out a living by migrating to cities as wage labourers in the off-season. During a recent visit to Kenbanki, a lady in a traditional tribal saree caught my attention. She was busy placing mahua flowers in a basket, with her children by her side. She introduced herself as Bahrin Bhuyinya, and said that she lives with her husband, four children, and parents-in-law. Her family owns six acres of land where they can only cultivate paddy in the rainy season as they don’t have any irrigation sources near their fields. In the past, produce from the land was insufficient to meet the needs of her family so Bahrin and her husband would work in the fields of marginal famers. However, low agricultural wages meant that even this was not enough. The Mahatma Gandhi National rural Employment Guarantee Act (MNREGA) came as solution for the family as it promised 100 days of employment. But due to late payments (sometimes no payment), lack of information about the process of getting employment and lower wages compared to private contractors, her family had to look for more lucrative opportunities elsewhere. In recent years, her husband has taken to migrating to the nearest city in the off season. 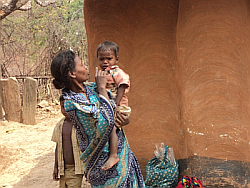 In Bahrin’s view, the village has changed a lot in past few decades. In 2002, a MNREGA funded road was built to connect the village to the main National Highway which has greatly increased accessibility. Villagers are now more cognisant as compared to the last decade and many other schemes have reached the area. As she is a Below Poverty Line (BPL) card holder, her family is on the preference list of beneficiaries for various schemes and this has brought about a significant change in her life. In addition to MNREGA, she is a beneficiary of the Indira Awas Yojana (IAY), Public Distribution System (PDS), medical facilities and free schooling. A piece of waste land belonging to her family was leveled under MNREGA and is now cultivable. The introduction of a Sahiya, who acts as a facilitator in the healthcare system in the village, has been a relief as she is now a vital source of information for all the medical facilities that can be availed from the Primary Health Center. As the Sahiya is one of them, the villagers have faith in her and she has introduced them to different facilities such as institutional delivery, Ladli Laxmi Yojna, Polio Day etc.

A Different view on Naxalism

Bahrin puts forward a different view on Naxalism as compared to the common perception. She feels it has been useful for her family as her husband used to be an alcoholic. This would result in regular scuffles in the family. ‘Naxal bhai’’s have helped eradicate alcoholism completely from the village by punishing both the consumers and suppliers of alcohol. However, the villagers have been made to follow their orders whether or not they agreed with them and this has brought about suffering for some families.

The role of women in the village community

Ever since a lady was elected as Mukhiya (elected representative in the village Panchayat) of the village, Bahrin and the other women in her village feel more confident expressing their views about the development aspects of village, and basic necessities with respect to women. Bahrin herself has started to participate in the Gram Sabha more frequently. The stake of women is also increasing in the economic affairs of the family. Bahrin ventured to join a women’s group run by the government under the Swaranajayanti Gram Swarozgar Yojana (SGSY), and enrolled her children in school. The group took up trading of forest produce as their main activity from the revolving fund they received. They gained a profit of Rs. 10,000 in trading ‘Mahua’ in the first 3 months period, as they sold 30 kgs of Mahua at a high rate in the off season.

Bahrin is very hopeful for a better future as her children are going to school and benefit from the PDS and medical facilities. It is believed by the women in this village that the further development of the region is possible only if women are uplifted and can contribute to the success of their family and community.

Next Friday, Basanti Naik from Odisha shares her success story in the final installment of real life accounts from the field.