Government recently announced its decision to borrow in foreign currency from abroad to finance part of government’s fiscal deficit. In this post, Renu Kohli discusses some key fiscal preconditions regarded paramount to ensure a strong sovereign balance sheet before venturing in to the unchartered territory of foreign borrowing.

The decision to borrow in foreign currency from abroad to finance part of government’s fiscal deficit has opened a Pandora’s Box. It excited markets, causing the benchmark bond yield to fall sharply with beneficial impact on funding costs. But many economists, including former Reserve Bank of India (RBI) Governors and Deputy Governors, have raised red flags, possibly compelling the government into second thoughts. This was one of those odd issues where the markets and economists were at loggerheads; the latter in particular displaying their deep distrust about the former. Former RBI governor Dr. Raghuram Rajan, was particularly critical of market participants and their advocate foreign bankers.

Why is sovereign foreign currency borrowing such a folly? The fine distinction between two different capital account measures bears significance: While Foreign Portfolio Investors (FPIs) bear the exchange rate risk in rupee-denominated sovereign debt, it devolves upon the sovereign when it is foreign currency-denominated. The latter is viewed through a narrow prism of the ‘original sin’ (that is, emerging market economies are forced to borrow in foreign currency because they are unable to issue local-currency debt abroad) especially for countries experiencing periodic turmoil in their external accounts. Dr. Y.V. Reddy, former RBI Governor flagged other key risks and complications involving sovereign debt, concurring with Dr. Rajan that all addictions start small. Dr. Bimal Jalan, former RBI Governor, has been the rare exception to downplay such risks and support sovereign borrowing given India’s current economic fundamentals.

The question before policymakers is not if India can borrow in foreign currency on current fundamentals. Rather it is if it should do so given the associated long-term risks. Dr. Y.V. Reddy has wisely advocated outlining a road map towards capital account convertibility1 wherein sovereign bonds are back-loaded, not upfront.

The unfortunate part of this ‘for-and-against’ debate so far is that no one has explained where do the several and carefully articulated recommendations of the Tarapore Committees, 1997 and 2006 (TC-I, TC-II hereafter) on capital account convertibility stand; these have been longstanding edicts for determining pace and sequencing. Here we revisit some key fiscal preconditions regarded paramount to ensure a strong sovereign balance sheet before venturing in to this unchartered territory!

An accepted element of risk exposure is the strength and quality of the balance sheet. This requires stock-taking to be monitored. TC-I outlined fiscal preconditions/signposts for gradual entrenchment to liberalise the capital account for three years to March 2000; actual fiscal outcomes were to determine the pace. TC-II (2006) reviewed progress after then Prime Minister Dr. Manmohan Singh’s request “...to revisit the subject and come out with a roadmap based on current realities” in a speech at RBI in March 2006. Each aspect – India’s experience till then; implications for monetary and exchange rate management, financial markets and financial system, dollarisation of domestic assets and rupee internationalisation, the regulatory framework in other countries that advanced similarly – was to be studied for providing “...a comprehensive medium-term operational framework, with sequencing and timing, for fuller capital account convertibility taking into account the above implications and progress in revenue and fiscal deficit of both centre and states”. The last is what Dr. Reddy has in mind.

TC-II noted fiscal consolidation, namely, centre’s gross fiscal deficit and domestic liabilities (shares of Gross Domestic Product (GDP)), fell short of TC-I’s expectations. The recommended concomitant preconditions were, inter alia, centre’s fiscal deficit reduction to 3% of GDP, elimination of revenue deficit by 31 March 2008, and building a revenue surplus (1% of GDP) by 2010-11. Revenue surplus was the key first step for repayment of marketable debt, explicit and implicit. TC-II urged focus upon gross, not net market borrowings as the former related to market’s absorptive capacity and to gauge potential borrowing costs. And for more accurate assessment of the fiscal’s resource dependence on the economy, TC-II advocated graduating to a Public Sector Borrowing Requirement (PSBR) measure instead of the fiscal deficit. The PSBR was roughly assessed as 3% of GDP above the fiscal deficit in 2006. TC-II suggested the RBI attempt a preliminary PSBR assessment and make it public to facilitate its adoption as a clearer indicator of the public sector deficit.

How does the current picture compare with TC-II’s pre-conditions? The table identifies the salient shifts, including absence of PSBR’s relevance from the revised fiscal framework (2018). Three features make TC-II’s position on PSBR very relevant in present context. 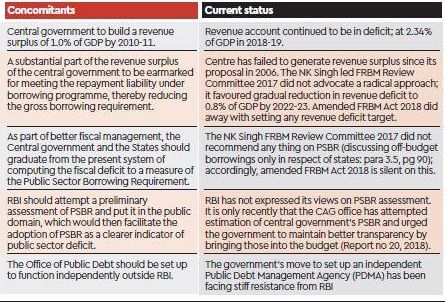 One, PSBR remains near about 3% of GDP higher than the fiscal deficit. For fiscal year 2017 (FY17), the Comptroller and Auditor General (CAG) estimates off-budget/extra-budgetary borrowings aggregated 2.85% of GDP. It reportedly re-calculated the fiscal deficit including extra-budgetary resources for the 15th Finance Commission for FY18, placing it at 5.85% against 3.46% of GDP reported in the budget!

Two, the government openly acknowledged it was compelled to borrow abroad to spare domestic resources for the private sector. No better proof that PSBR matters for crowding-out, pressures real interest rates as impressed by TC-II back in 2006. 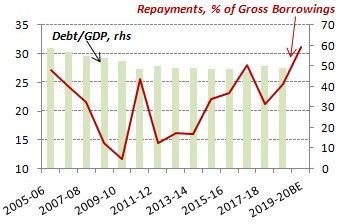 Amendments to Fiscal Responsibility and Budget Management Act (2018) anchored the medium-term fiscal strategy upon the debt-to-GDP ratio, making fiscal deficit the operational target. The absence of revenue deficit target means no bar on the shift toward revenue expenditure which would balloon. The focus on fiscal deficit to achieve debt-to-GDP targets induces government to move capital expenditure outside the budget. The worst part is of revenue expenditure being pushed out.

The literature on ‘original sin’ is straightforward: countries without solid fiscal and financial sectors should avoid borrowing in foreign currency. TC-I and TC-II had primarily focused on this, emphasising the adverse effects of fiscal weaknesses are transmitted much faster with increased capital account openness; as sound fiscal position that moderates PSBR was essential therefore. In the present liberalisation, the government is pretty much admitting to paucity of domestic resources. There’s a view that borrowing US$10 billion will not be a stress given high forex reserves. But what we are actually witnessing is a situation of domestic resource constraints that could worsen in the years ahead.

The question is if the signposts and risk concerns expressed by the Tarapore Committees are no longer valid, and why? One needs to revisit these issues. An in-depth, all-round assessment of the strength of India’s macroeconomic framework, with recourse/reference to past committees that included experts and practitioners and carved out in stone, as it were, critical preconditions, is necessary. Perhaps the RBI – which surely realises implications for future macroeconomic management and financial stability policies – can conduct this.