Arvind Subramanian (India’s former Chief Economic Adviser) and Josh Felman (former IMF Resident Representative to India) have brought out a new policy paper, offering a diagnosis of the Indian economy and recommendations for the forthcoming budget. In this post, Ashok Kotwal (I4I Editor-in-Chief) highlights key takeaways from their paper. Over the next few days, I4I will present a series of comments by eminent economists on this analysis.

On 1 February, the Finance Minister will present the annual budget of the central government, and the budget will be extensively analysed in the media by various experts and commentators. This is an extraordinary year and the expectation is that a strong budget can signal that we are on the path to recovery. Budgets typically lay out the government’s plan to deal with the present state of the economy, backed with financial allocations. It is also indicative of broad policy direction and priorities. Any assessment of the budget measures cannot be undertaken without a good understanding of how the economy got to be in the state it is now. It has to be based on what worked and what did not work, and steering clear of past mistakes in the way forward.

Arvind Subramanian, India’s former Chief Economic Adviser, had a ringside view of the various policy initiatives during the period 2014-2018. In fact, several of these initiatives had his thumbprints on them. He has recently written a significant paper (jointly with Josh Felman) presenting his candid views on what worked and what did not work in hindsight. The authors provide their assessment of the appropriateness of the policy measures and their judgement on how much social good particular policies confer on various segments of the Indian population. Subramanian and Felman first offer their diagnosis of the issues, and then make recommendations for the future.

We, at I4I, thought that this would be a timely opportunity for our readers to take a look at the policy initiatives through the eyes of someone who was right there among the policymakers. We have therefore invited a few eminent economists to comment on Subramanian-Felman’s paper. I believe that this symposium will give you the necessary background to better appreciation the budget discussions.

The authors point out that the Modi 1.0 regime has some significant achievements to its credit but the implementation of a few of the policies left something to be desired. The culprit for the flawed implementation, according to Subramanian-Felman, was what they call ‘software’ of policy design and implementation. I understand it to mean the government’s approach to creating trust and the art of consensus-building. Some reform measures were pushed through without showing any desire to compromise. The recent protests over the new farm laws is a case in point.

The following table from Subramanian-Felman paper summarises their assessment of various government policy initiatives. The authors believe that most of these policy initiatives were wisely chosen (good ‘hardware’) and yet were only partially successful in the way they functioned due to the fact that the government did not succeed in securing a buy-in from all concerned parties. This, in turn, was due to the lack of political skills in persuasion and public communication with a large number of those who had a stake in the policy initiative at hand (bad software). Further, this was perhaps attributable to the loss of government’s credibility and trust. Questionable government data and the unethical ex-post Vodafone judgment were the kinds of developments that potentially caused an erosion of public trust in the government. The authors’ prescription to correct this software bug are: accurate data, fair decisions, Statecraft to win support for the measures, policy consistency over time, and rule of law in implementation. 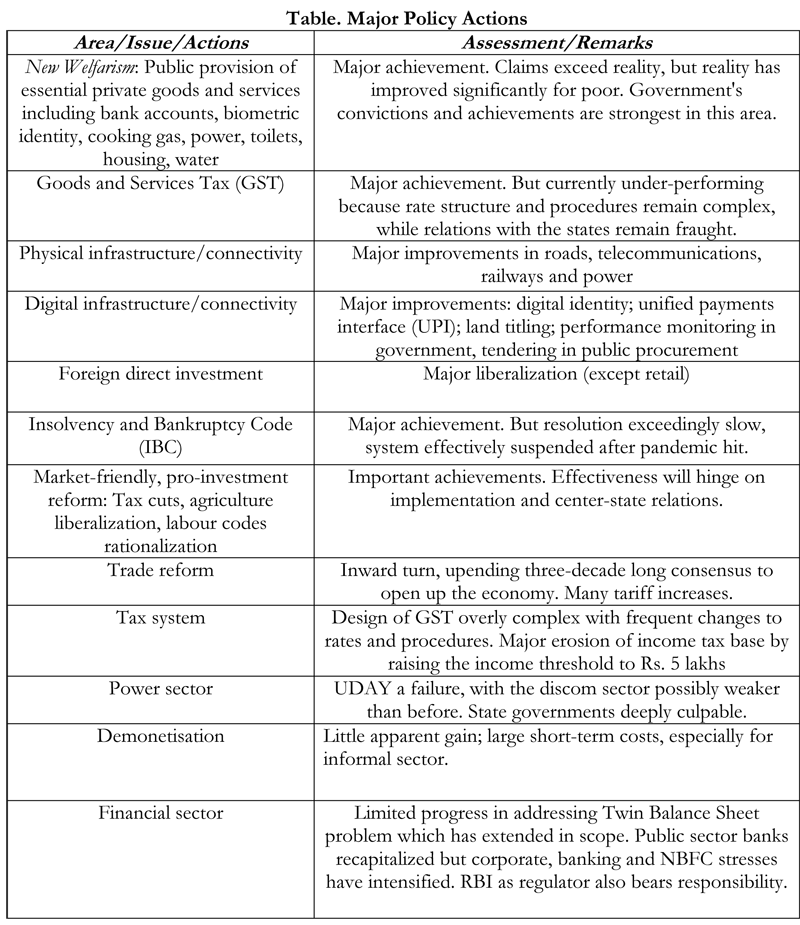 I4I will carry a symposium of a diverse group of economists that will comment on Subramanian-Felman’s assessments of the Government of India’s policy choices and the consequences.

Perspectives on the analysis

This is excellent. While designing policy actions (solutions) and during implementation there are always dilemmas (conflicts). Dilemmas due to short terms vs long term considerations, political dilemmas (economics vs politics), dilemma between quality/ service vs cost, benefit to niche vs benefit to majority, etc

It will help government and citizens at large if the experts can articulate the dilemmas for the government. They can opine on the mistakes made by govt in implementation by highlighting the incorrect assumptions and actions taken. They must recommend how they would have resolved the dilemmas in a win-win fashion.

There may be number of thinking process tools which will help to articulate and capture this. I am familiar with the Thinking Process Tools developed by Dr. Eli Goldratt in the body of knowledge called Theory of Constraints. (wiki link below)

Thanks for the summary of the paper which I will download and read. For the 12 reform areas listed, only a few show successful intermediate outcomes. A couple of important sectors show poor results -power and financial sector, and others are in between. The government has shown a propensity to take action without adequate consultation with stakeholders which which causes resentment, as intended reforms are not well understood and there are adverse impacts on some groups who benefited from the state quo. The current imbroglio with liberalization of agricultural product prices is a good example. I think that successful policy formulation and implementation goes beyond initial stakeholder consultation. The private sector has to be involved in implementation of the reforms and the government needs to make a strong effort at every level to get their cooperation and obtain continuous feedback on the results and outcomes. Reforms require persistence and are not one shot efforts. Legislation can be enacted but unless implemented effectively, the outcome is poor. The GST and Bankruptcy law are good examples. Governance needs improvement at all levels and institutions need strengthening.