With more women in power, can India’s women expect to see a fall in violent crime committed against them? This column looks at the effect of a law to mandate minimum numbers for women in public office – its findings are both surprising and encouraging.

The assurance of personal safety and fair treatment under the law are two of the most fundamental aspects of a civilised society. However, protecting these rights for disadvantaged groups, such as minorities and the politically underrepresented, has remained a challenge in many countries — exemplified by the recent horrific incidents of violence against women in India, which have generated widespread national and international outrage.1 There has been much debate over how governments can intervene to avoid such outcomes. While a range of policies – from affirmative action quotas in education and jobs, to legal protection and better law enforcement – have been considered in the past, our research finds that there is another novel approach that can be effective: greater political representation for women.

In recent research with Prachi Mishra and Petia Topalova, (Iyer et al 2012), we study this link between political representation and crimes against women in the context of India’s 1993 Panchayati Raj constitutional amendment in 1993. Under this law, the central government mandated that one-third of all seats in local councils (village, intermediate and district levels), as well as one-third of all chairperson positions, would be reserved for women. This amounted to a dramatic increase in the number and fraction of women in political office.2 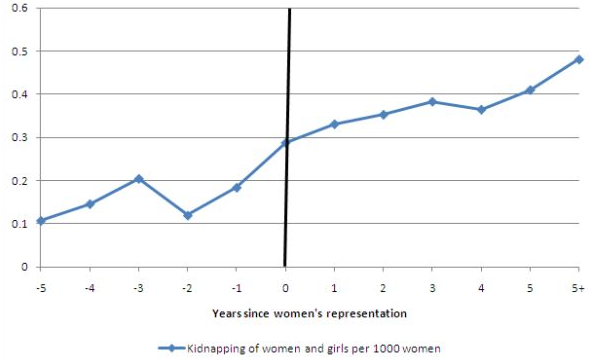 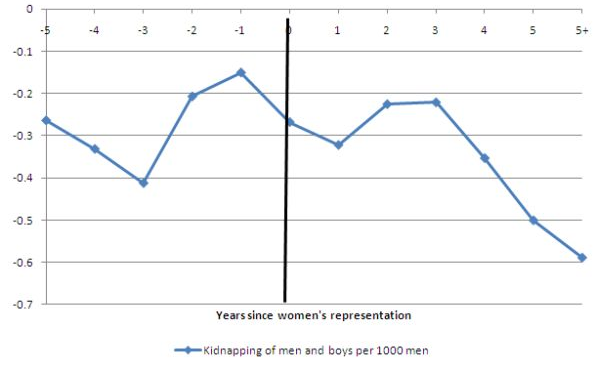 However, a more detailed analysis showed that these increases in crime numbers against women are actually good news. They are driven not by a surge in the actual crimes committed against women, but by increased reporting of such crimes. Several pieces of evidence support this conclusion. Most of them point to an increase in the responsiveness of the police under women political representatives, which encourages women victims to voice their concerns as well.

A lack of police responsiveness has been previously identified to be a major problem in India.4 A study in the state of Rajasthan found that only 50% of sexual harassment cases and 53% of domestic violence cases were registered by the police, and that too when a male relative tried to report it on behalf of a female victim (Banerjee et al. 2011). However, survey data from the same study that we analysed shows that in villages with women-headed local government councils, women are significantly more likely to say that they will lodge complaints with the police, should they become victims of a crime.5 There is also no difference in crime rates against women between villages with and without women leaders. This suggests that the observed increase in crime rates nationwide following mandated political representation for women is not driven by greater actual incidence of crime.

Another nationwide survey assessed actual interactions of women and men with the police.6 Women in villages with female council heads reported greater satisfaction in their interactions with the police and a lower likelihood of being asked to pay bribes. Again, there was no difference in the experience of men, as a function of the gender identity of the village council head.

There is also a strong perception that police behaviour is affected by the presence of local women leaders. In the State of the Nation Survey, nearly half of respondents identified their village council member as the locally influential person they would turn to in cases of difficulty.7 They strongly believe that the police are more likely to listen to them sympathetically and take action if they are approached with such a locally influential person by their side.

National crime data on police action indeed confirms the above perceptions of women under female political representatives: Arrests for crimes against women increased by 31% in a state, after the implementation of political representation for women. Taken together, the three pieces of evidence cited above suggests that female victims are met with greater responsiveness and action from the police when more women participate in local governance.

Closer to the Victims

As mentioned earlier, the 1993 reform increased the participation of women in local government at three levels of administration, at the district, sub-district and village level. We tried to understand at what level women´s participation in politics makes the biggest difference. For this, we exploit the fact that, during any election cycle, only one-third of district council head positions within any state are randomly assigned to women (whereas one-third of the members across all these councils are women). This allows us to assess the marginal impact of a female district council head, over and above the impact of women political representatives at lower levels. We find that women political representative have the most effect on giving voice to women victims not so much in the highest position at the district level, but at lower levels. In other words, greater proximity of female political representatives to potential victims is an important factor in giving effective voice to women, to bring their grievances to light. This is consistent with related research which shows that women are more likely to attend village meetings and speak up during them, if the village council leader is a woman (Beaman et al 2009).

Our findings are particularly remarkable, given that the 1993 reform did not assign any formal authority over the police to local government councils. Law and order, including decisions on police budgets and staffing, remain matters decided by state governments. Thus, the observed effects of political voice for women are driven largely by the gender identity of those holding political office, rather than their formal authority. These findings thus negate the scepticism expressed in some quarters about the effectiveness of female leaders in ensuring better outcomes for women.8 However, they highlight that what matters is the presence of women not just at the top, but in the broad base of political institutions. Repeated political representation of women at this level has also been found to improve the perceptions of women as leaders (Beaman et al 2009). The latter could pave the way for an improvement in attitudes towards women over time, and hence a reduction in crimes against them as well.

Finally, in light of recent media attention to crimes against women in India, our work shows that crime statistics need to be interpreted with care. Not all documented increases in crime are necessarily bad news: reporting biases are an important factor to be accounted for in crime data, especially against disadvantaged groups.

A version of this column has appeared in the quarterly newsletter of the Royal Economic Society.