With millions of young people entering the labour market each year, the big question is whether there will be enough jobs for them. But who actually creates these jobs? This column looks at data from India suggesting that young and small firms play a vital role. Policymakers just need to support them.

The role of entrepreneurs in job creation has a long intellectual tradition (Cantillion 1730, Knight 1921, Schumpeter 1942). While the great economic minds throughout history recognised the link between entrepreneurship, regional development, and job creation, controversies remain. Our understanding of entrepreneurship is still at an early stage (Glaeser et al 2009, Klapper and Love 2011). How does one quantify entrepreneurship? Do young/ small establishments or large/ established firms contribute to job growth? Have manufacturing or service sectors created more jobs? What is the geographical scale at which entrepreneurial mechanics function? Why do some cities attract more entrepreneurs? Do agglomeration economies and networking differ across formal and informal sectors and industries, cities, and gender? What makes some local governments fiscally more entrepreneurial than others? These questions provide insights into job creation and they have rightly attracted the attention of researchers, but many of them remain unanswered.

In a recent book Reshaping Tomorrow – Is South Asia ready for the Big Leap?, we examine entrepreneurship, regional development, and job creation in South Asia (see Ghani ed. 2011). Figure 1 compares the new business registration density of South Asian countries with the rest of the world (see also Ghani et al 2011a). Contrary to popular belief, it turns out that India has too few entrepreneurs for its stage of development.

Demographic trends for India, the second most populous country in the world, suggest that a million new workers will join the labour force every month for the next two decades (Bloom et al 2011, World Bank 2011a). This is equivalent to the entire population of Sweden joining the labour force in India every year for the next two decades (Kochhar 2011b, Mitra 2011). So the pace at which new jobs are created will determine whether the demographic trends become a dividend or a disaster. 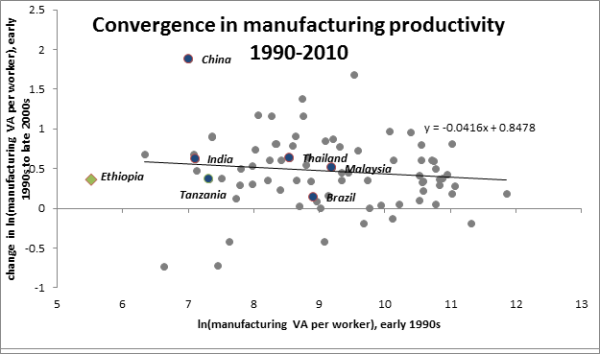 Following this emerging strand, and given data limitations, we define entrepreneurship as the presence of young establishments which are less than three years old. The primary metric of entrepreneurship – young establishments per 1,000 workers in the formal manufacturing sector – shows a slight upward trend over time in India; but it also shows significant heterogeneity across states.

The link between new establishments and job growth

Figure 2 provides the simplest representation of the link between entrepreneurship and job growth in India. There is a strong positive association between the number of new establishments per worker and employment growth, similar to that found across cities in the United States (Glaeser and Kerr 2010a), and it is clear that the relationship does not overly depend upon any one region. 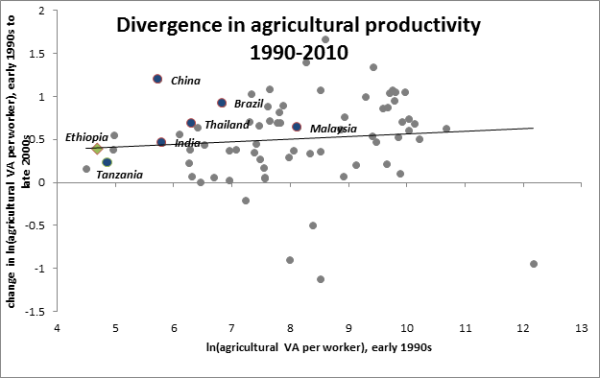 There is huge variation in entrepreneurship across states in India. The spatial distribution of start-ups in India is more fluid than in the United States. For the United States, existing city population levels, city-industry employment, and industry fixed effects can explain 80% of the spatial variation in entry rates. The comparable explanatory power for India is 29% for manufacturing and 33% for services. While this lower explanatory power could be due in part to dataset features and/or subtle, necessary shifts in methodology, it is clear that a large portion of this gap is due to India being at a much earlier stage of development, both generally and for these particular sectors.

Which regional traits encourage local entrepreneurship? Is it differential returns to entrepreneurship? Or do entrepreneurs respond to differences in the availability of infrastructure and education? This list is by no means exhaustive, but it parallels the well-known list of explanations for the agglomeration of economic activity.

Our tests of the entrepreneurial returns hypothesis did not find a strong relationship between the heightened presence of young establishments in 1989 and the subsequent value per worker in the region-industry. This suggests that anticipation of abnormal returns is not the driving force behind the observed relationships in India. Demographics have limited explanatory power.

The two most consistent factors that predict overall entrepreneurship are local education levels and the quality of local physical infrastructure (see our other recent research Ghani et al 2011b). These patterns are true for manufacturing and services. Among general district traits, the quality of physical infrastructure and workforce education are the strongest predictors of entry, with labour laws and household banking quality also playing important roles. There is evidence that strict labour regulations discourage formal sector entry, and better household banking environments encourage entry in the unorganised sector.

Looking at the district-industry level, there is extensive evidence of agglomeration economies among manufacturing industries. Start-ups are more frequent for a city in industries that share common labour needs or have customer-supplier relationships with the city´s incumbent businesses. There is also substantial evidence for the ‘Chinitz effect’ where small local incumbent suppliers encourage entry.

Job growth is predicted by higher concentrations of new and young establishments. The self-employment rate of entrepreneurship does not fully capture the scale of entrepreneurship or its success. Alternative measures, such as number of formal establishments per worker in an area, are better predictors of subsequent job growths. Cities and states that have embraced entrepreneurship have created more jobs and experienced higher regional growth. The policy message is clear: if job creation is a priority, policymakers should focus on promoting entrepreneurship locally.

Of course, there are many policy levers that can be used by policymakers to promote entrepreneurial growth (Devan 2011). To help achieve this, governments should invest in education and physical infrastructure. High-quality goods and services cannot be produced without well-educated workers and they cannot be delivered without roads, electricity, and telecommunication. And moving people is as important, if not more important, as moving goods (Acs et al 2008, Atinc 2010, Pradhan 2011, and Stiglitz 2011).

It is worrying that there are too few entrepreneurs in India and other countries in South Asia for their stage of development. Yet there is no question that entrepreneurship works in India and that its entrepreneurial potential is substantial (Khanna 2008). While India has experienced record growth over the past decade, we can only imagine what would happen if India had more entrepreneurs. Given the link between entry, young establishments, and job growth, how fast could India’s growth and job creation become?

A version of this article has appeared on VOX EU. The views expressed here are those of the authors, and not necessarily those of the World Bank or any other institutions they may be associated with.