Why do so few women in India work? 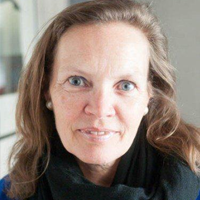 Only about a third of working-age women in India have jobs. This column analyses the determinants of women’s participation in the labour market in India and finds that factors such as family income, cultural norms and gender wage gap play an important role. It suggests that raising female labour force participation could boost economic growth by up to 2 percentage points.

India is in many ways at a crossroads. The new government is in search of ignition to restart the growth engine and make it more inclusive. But if this is to happen, Indian women will have to be given the chance and the incentives to participate more in the labour market. Currently, female labour force participation is among the lowest in the emerging markets and declining. OECD (Organisation for Economic Co-operation and Development) calculations show that growth could be boosted by up to 2 percentage points with a package of pro-growth and pro-women policies. Understanding the nature and causes of female labour force participation in India is important to identify these policies. Recent OECD work (OECD 2014, Sorsa 2015, Daymard 2015) go into more depth than many previous ones to assess female labour market dynamics.

Less than a third of working-age women in India have jobs, which is low among the BRICS (Brazil, Russia, India China and South Africa) (Figure 1). Participation in the labour force is higher in south and west India compared to east and north, which may reflect variation in customs (Eswaran et al. 2013). Participation is also higher in rural than urban areas and among the poor, and declines with family income and education of the women, but rises again among the highly educated women or in high-income families (Figure 2). The poor work for necessity, while social norms among higher-income groups have a strong impact on participation. Women staying home are often considered to increase a family’s social status, explaining part of the negative association between family income and women’s economic participation (Klasen and Peters 2013).

Note: Data is for working-age population (15-64 years). Income quantiles are based on the monthly per capita consumption expenditure of households.
Source: NSSO (National Sample Survey Organisation), Employment and Unemployment Survey, Rounds no. 55, 61, 66 and 68. 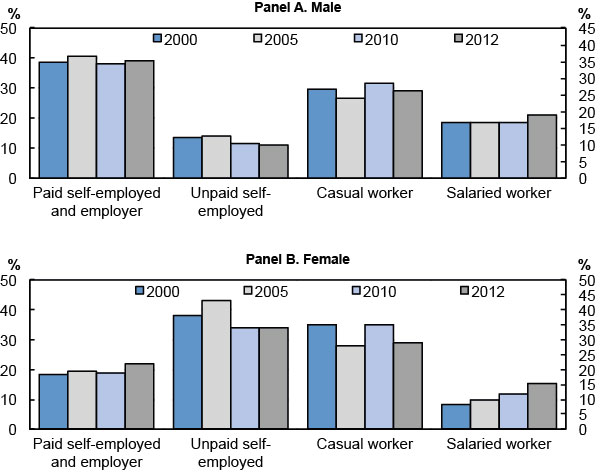 Women tend to work in less productive jobs than men, as in many developed and emerging countries (World Bank 2012). More than 30% are unpaid self-employed helpers (for example, a woman working in her husband’s shop), compared to 11% of working men (Figure 3). Women also have higher than average labour shares in low-productivity agriculture, traditional small-scale manufacturing, and in services such as education and household employment. Only about 6% of women employed are in the formal sector with social benefits, such as pensions or maternity leave – factors that can influence participation. This is not necessarily gender-specific as most jobs in India are in the informal sector as many companies stay informal to avoid stringent regulations on labour or business establishment (Government of India 2013). Even among men, only about 9% of workers get social benefits.

The quality of female jobs has improved somewhat over the past seven years as the share of female unpaid work declined in rural areas (Figure 3), and employment with regular salaries (salaried workers in Figure 3) rose slightly in services and manufacturing in the urban areas. However, most of the rise in these jobs was still in the informal sector without social benefits (Mesrotha et al. 2014).

As in many other BRICS, participation may also be influenced by the large wage differential that women face in India, especially among unskilled workers. A barely literate man earns nearly twice as much as a woman with similar skills. The difference decreases somewhat with education, especially in services (Figure 4).

Notes: Female wages are measured as a percentage of male wages in the respective industrial sectors as of 2012. Unpaid family workers do not report wages, therefore they are not included.
Source: NSSO, Employment and Unemployment Survey, Round no. 68.

Due to the gender wage gap, it can make more sense for the men in the household to take up paid employment outside, leading the woman to stay at home to do household work. In a survey in rural areas, Khera and Nayak (2009) find that many women do not engage in paid work because of the low wage. With large wage differentials, the value of non-market goods production (or regular housework) at home can be larger than the market production wage. This may have been reflected in the drop of rural women from unpaid or low paid self-employment outside the house, as discussed above, as more men found wage jobs and got higher wages. At the same time, MNREGA (Mahatma Gandhi National Rural Employment Guarantee Act) - that offers women equal pay and quotas in rural work programmes - has helped raise female labour force participation. This suggests that reducing wage gaps and increasing active labour market policies (such as the MNREGA programme) can raise female labour force participation (OECD 2015, forthcoming).

Given the opportunity, many women in India would like to work more. Household surveys show that a large proportion of stay-at-home women would prefer to work on a regular basis, provided the conditions are right (NSSO). The right conditions may include better wages, availability of safe transport, day care etc. Unemployment is also high among the most educated (Figure 5); despite higher labour-market participation in this category, the proportion of women looking for work and not finding it is high. This may be because of a lack of suitable jobs or a lack of marketable skills.

Figure 5. Unemployment rate by the level of education 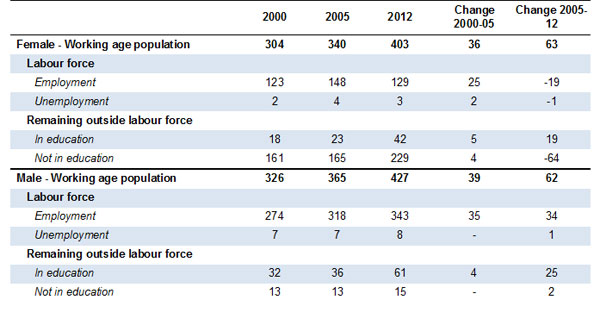 Source: Data is on working-age population (15-64 years). Estimates are based on NSSO rounds no. 61 and 68. Note: ´In education´ refers to schooling.

A forthcoming OECD (Sorsa et al. 2015a) paper quantitatively estimates key determinants of low participation of women in the job market in India. It confirms the strong impact of socioeconomic factors, especially in south and west India, in reducing participation. In east and north India, other cultural factors, such as religion, dominate. Other deterrents to participation are stringent labour laws that discourage formal job creation with social benefits, weak infrastructure, and access to financial services (potentially affected by impact of biased inheritance laws and dowry payments on access to collateral). It also confirms the positive impact of MNREGA on participation, and of other factors such as rising education levels over time, and training for skills.

Another forthcoming OECD paper (OECD 2015) estimated the growth impact of raising female labour force participation, drawing on similar work on Brazil (Agénor and Canuto 2013). It shows that raising participation with a package of pro-growth and pro-women policies can boost the growth rate by about 2 percentage points over time (Table 2). 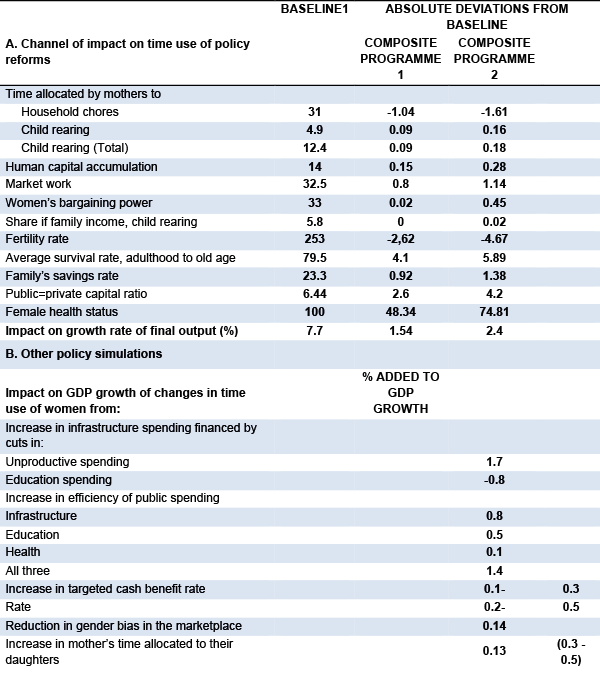 This column is based on an OECD project by Piritta Sorsa, with Mathilde Didier, Caio Guimaraes Souza, Jan Mares, Marie Rabate, Gen Tang and Annamaria Tuske, developed in collaboration with Pierre-Richard Agenor (University of Manchester). The views in the article are those of the authors and do not reflect necessarily those of the OECD.