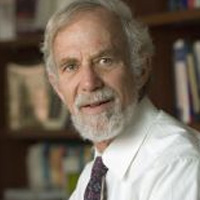 Language choice is central to organisation of society, transmission of knowledge, and interpersonal communication, and hence, has implications for socioeconomic inequality. This column examines the consequences of language policies on developmental outcomes in post-colonial States.

An important endeavour in understanding the role of institutions in economic development is to identify the form and shape of institutional arrangements that restrict access or participation in social, economic, and political spheres for the vast majority of people. We hypothesise that language policies in post-colonial States are an important institutional feature that benefit a tiny elite at the expense of a large majority and can help explain poor socioeconomic outcomes. The choice of language has important implications for knowledge acquisition in school and society. Knowledge acquisition in turn affects cognitive skills, employability, as well as health knowledge and practices.

There are two facets of language that may affect cognitive, health, and participatory failures: ‘distance’ from, and exposure to the official language. The first assumption underlying our theory, and one based on simple observation, is that the lower the distance or dissimilarity of one’s native tongue from the language of schooling, the lower is the cost of learning. The second crucial assumption is that the higher the exposure of any individual to the official language, the lower is the cost of learning. This second assumption rests on the notion that the size of the population using the official language affects the ability of any individual in that community to learn it; size is also crucial in determining the supply of teachers with ‘adequate’ skills in the language of instruction used in schooling.

We test the implications of our theory, with a particular focus on sub-Saharan Africa (SSA) (Laitin and Ramachandran 2016). What distinguishes SSA’s language policy from the rest of the world is the extensive reliance on non-indigenous or former colonial languages – English, French, Portuguese, and Spanish – as the principal languages of education, government, and administration. With the exception of Ethiopia, Eretria, and Tanzania, no country in SSA provides the entire span of primary schooling in a local language; moreover, secondary schooling and higher education in SSA is provided exclusively through the medium of former colonial languages.

We test the implications of our theory using both cross-national macro data and micro data from Southern Africa and India. In a first step, we measure the distance between the native language of every linguistic group and the official language of all countries. The distances are empirically operationalised using language trees constructed by the world encyclopaedia of languages, Ethnologue. Proximity is calculated by the number of shared branches on the language tree. In the next step, we create a weighted index at the country level, where the weights are the population share of every group, and the weighted index measures the Average Distance from the Official language (ADOL).

The constructed measure of language distance and exposure, in line with our theory, is seen to be a statistically significant and economically meaningful correlate of proxies for human capital, health, income, and productivity (see Figure 1). The pattern of lower distance to the official language, implying higher country wealth and human development, holds both within and across continents. Studying factors affecting official language choice, we find that possessing a writing tradition is a key explanatory factor, rather than past wealth or development levels. Using distance from the sites of invention of writing as a predictor of possessing a writing tradition, and consequently ADOL, we provide a causal logic linking higher distance from the official language to lower levels of socioeconomic development. The economic magnitude of the estimates is large, and shows that if a country like Zambia were to adopt Bemba instead of English as its official language, it would move up 44 positions on the human development index (HDI) ranking and become similar to a country like Paraguay in human development.

Figure 1. Scatter plot of ADOL and the four socioeconomic variables of interest 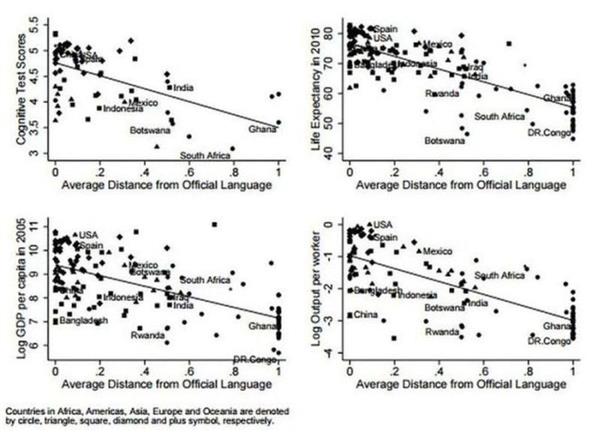 We then first conduct tests based on the National Family Health Survey from India for the distance channel (Laitin and Ramachandran 2016). Analysing distance from the State language for second-generation immigrants within India, we show that increasing distance predicts lower schooling and occupational outcomes. For instance, a Tamil speaker resident in Kerala where a Dravidian language similar to Tamil is used, moving to a state using an Indo-European language (example, Uttar Pradesh), would reduce average years of schooling by around one year, and decrease the probability of using a mosquito net, of ever having heard about AIDS, or of holding a white-collar job by 4, 9, and 3 percentage points, respectively. Next, to evaluate the importance of the exposure channel, we employ Grade 6 classroom data from the Southern and Eastern Africa Consortium for Monitoring Educational Quality (SACMEQ) for 11 Southern African countries (Laitin and Ramachandran 2016). Comparing students within the same classroom, we show that exposure to English at home increases the probability of reaching the minimum reading level by around 10 percentage points.

In related work exploring consequences of language choices, we have examined the role of language of instruction on student learning in the context of both Cameroon and Ethiopia. The empirical methodology in these two studies allows us to move beyond observational to experimental data, or exploit policy changes, allowing us to more firmly establish a causal link between language of schooling and human capital formation. The results from Cameroon show that learning in the local language instead of English improves tests scores in both English and Mathematics (Laitin et al. 2017). More specifically, the results show that students with local language as their medium of instruction score more than twice (50% versus 20%) as many points in English and Mathematics, with the gains amounting to 1.1-1.4 of a standard deviation1 in Grades 1 and 3. It also increases the probability of being present in Grades 3 and 5 by 22 and 14 percentage points, respectively.

Ramachandran (2017) in turn exploits the introduction of local-language instruction for the largest ethnic group in the country in four of the 11 regions of Ethiopia. The results show that access to mother-tongue schooling increases the ability to read by 40%. Moreover, it increases the completed years of schooling by more than half a year, and the probability of completing primary schooling by five percentage points. The ability to read by permitting access to printed sources of information increases newspaper readership by around 25% and makes it 17 percentage points more likely that individuals report using pamphlets, posters, or leaflets as a source of information about family planning.

The other facet of our research has focussed on understanding the factors explaining the constellation of language policy choices observed in the post-colonial world (Laitin and Ramachandran 2017). On the one end of the spectrum are the former colonies in Southeast Asia – Indonesia, Cambodia, Laos, Vietnam, etc. – that rely extensively on indigenous languages, and on the other end is SSA whose countries rely extensively on colonial languages. In between are countries such as India, Pakistan, and Malaysia that extensively use indigenous languages, though colonial languages remain the languages of power and prestige.

The research thus contributes to the endeavour of uncovering mechanisms and understanding the channels through which ethnolinguistic diversity operates to affect socioeconomic outcomes in society. Our reading of the results is that State-building and strength are compromised by choosing languages that are not widely spoken or understood, as the principal language of schooling, government, and administration. It has been argued that a common language is required to create national cohesion; our findings provide a further refinement to the above conclusion, that is, it is important to distinguish between the impact of nominating a common language, whose spread is restricted due to its dissimilarity from popular speech and limited societal usage, as compared to promoting a single language that is widely understood and spoken by a sizeable share of the population, on nation-building. Our research suggests in many contexts the attempt to use language to create an imagined common consciousness is at odds with the role of language to transmit knowledge and communications in the realms of art, literature, and culture.

Language choice is central to organisation of society, transmission of knowledge, and interpersonal communication. It has implications for who is enfranchised or disenfranchised in society, and consequently, for socioeconomic inequality. Our research shows that the causes and consequences of language choices remain under-researched and future work in development should put more emphasis on understanding the role and costs of language choices in human development of societies.