How gender-inclusive is MNREGA in practice?

MNREGA mandates that a third of all workers under the programme should be women. But how gender inclusive has the implementation of the Act been? This column uses nationally representative data to analyse participation of women in MNREGA. It finds that while the programme has performed well overall in terms of providing opportunities to women, there is significant variation across states and sub-populations.

Public workfare programmes in India including the Sampoorna Grameen Rozgar Yojana (SGRY) and the National Rural Employment Programme (NREP), have offered a unique opportunity for women to earn cash income, especially in a situation where the ability to work outside the home is often constrained by social norms1. The Mahatma Gandhi National Rural Employment Guarantee Act (MNREGA), which guarantees 100 days of employment in unskilled manual labour to every rural household, is no exception. 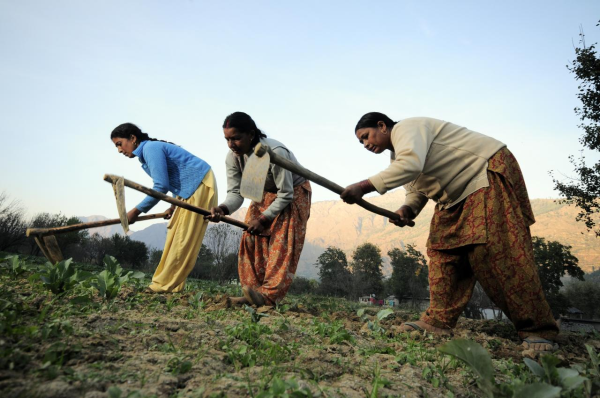 Opportunities for women under MNREGA

In terms of opportunities for women, three key features of the programme set it apart. First, the Act prescribes that at least one-third of the workers should be women. Second, the Act mandates equal wages for men and women, a feature it shares with public works programmes that preceded it, for example, the SGRY. This is especially significant in a context where agricultural and non-agricultural wages have differed by gender for similar tasks for ages. Third, since the entitlement of 100 days is at the household level, the allocation of work within the household is left to its members, allowing space for women participation in the programme2 . Further, the Act provides for facilities such as childcare at worksites to reduce barriers to women’s participation. There are others aspects as well that make the programme conducive to the participation of women; for example, work has to be provided within five kilometres of the applicant’s residence. The operational guidelines of the Act also incorporate measures that are sensitive to gender-related issues (Holmes et al. 2011). It is recommended that the local government should facilitate the opening of individual or joint bank accounts for beneficiaries for MNREGA wage payments to avoid sole access to the wages by the male head of the household. Even in the allocation of work, the guidelines recommend that women and older applicants be given preference on worksites closest to their dwelling. The guidelines suggest that social audit forums must be conveniently scheduled such that female workers and those from marginalised communities can participate without constraints. There are also guidelines for women’s representation in MNREGA staff whose recruitment is undertaken by a competent authority notified by the central or state or government, and in the selection of technical mates (worksite supervisors) (Government of India, 2013). Hence, in its design, MNREGA goes further than the previous labour market interventions in its overt aspirations for women.

Several studies indicate that MNREGA has been successful in providing significant access to work opportunities for women. Various field surveys across different states including Kerala, Himachal Pradesh, Rajasthan, Bihar, Uttar Pradesh, Chhattisgarh, Jharkhand and Madhya Pradesh, testify that the programme has been inclusive for women and effective in empowering them (Sudarshan 2006, Khera and Nayak 2009). However, there are studies that find women’s participation in MNREGA has not been uniform across different parts of the country. Dutta et al. (2012), for example show that women in poorer states that demand MNREGA work find it more difficult to obtain it. Khera and Nayak (2009) find that apart from the tenacious social norm against women working outside, presence of contractors and lack of childcare facilities also pose as severe barriers to their participation.

Until now, due to the nature of the available data, it was impossible to study women’s participation in MNREGA and rationing (allocation of jobs among those that demand them) of jobs among them, on a large scale. Using the employment-unemployment schedule of the 68th round of the National Sample Survey (NSS) data, I, along with my co-author Sudha Narayanan, examine differences across men and women in terms of demand for MNREGA work and rationing. We also examine whether the vulnerable groups (lower castes, female-headed households etc.), are likely to fare worse than others in terms of their access to the programme (Narayanan and Das 2014).

Table 1. Demand rate and rationing rate for MNREGA work for major Indian states, by gender (in %) 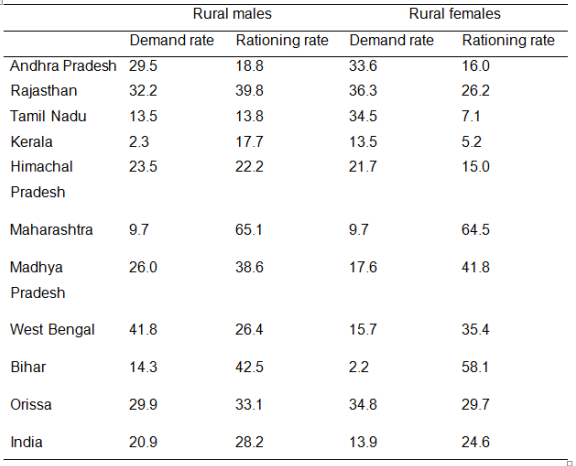 At the all-India level, there are indications that on average, work allocation has been progressive in the sense that women face lesser rationing than men. However, the positive performance at the all-India level in terms of rationing of MNREGA jobs among women belies the varied performance across states. For several states, we find evidence to support the observation made in Dutta et al. (2012) that the rationing process does not favour women, even though they are applying for jobs under MNREGA. In states like West Bengal, Bihar and Madhya Pradesh, the rationing for females is found to be higher than that for males. Further, the demand rate for females is also found to be lower. For the three southern states (Tamil Nadu, Kerala, Karnataka and Andhra Pradesh), along with Rajasthan and Himachal Pradesh, rationing seem to explicitly favour women. It is also found that in these states, a majority of the MNREGA households send only female members to work under the programme. However, in states like Bihar, Assam and West Bengal, proportion of households where only the male members are sent to work is higher than the proportion of households where only female members are sent to work. These observations are indicative of many potential issues. On the one hand, it could be the case that women opt out voluntarily because of other competing opportunities. On the other hand, insurmountable social barriers and norms against women working outside the home (especially for widows), and childcare responsibilities may also play a major role.

Another important concern in our research is to explore whether specific vulnerable groups/ households are likely to face serious constraints in term of access of women to MNREGA work. Table 2 presents the demand rate and rationing rate for some of these groups at an all-India level.

Table 2. Demand rate and rationing rate for MNREGA work for vulnerable groups (in %)

While it is encouraging to note that rationing for these households is low, difficulties faced by them in seeking work are apparent. Only 23.5% of the female-headed households are found to demand work. The demand rate for females from Scheduled Caste (SC) or Scheduled Tribe (ST) households is 22%, whereas for males from SC/ ST households, the figure is 31%. Apart from substantial social barriers that women might face while demanding work, it might also be the case that women are turned away from the worksites on the pretext that the work is not appropriate for them, or that men are more efficient in labour-intensive work3. Widows may also form another vulnerable group, who might be excluded citing reasons like the nature of MNREGA jobs requiring pairs to work together (social norms in some regions may not allow widows to work in close contact with men) (Holmes et al. 2010). Notably, only 21% of the rural widows are found to seek work in 2011-12.

Table 3. Rationing rate of the vulnerable groups for some major states

Our findings suggest that MNREGA has performed reasonably well overall in terms of providing work opportunities to women and facilitating their access to the programme. Yet, variations across states as well as across sub-populations point towards the fact that MNREGA operates very differently in different states. This implies a need for different policy emphasis across states. In states where implementation has been effective in terms of gender inclusiveness, the government authorities need to continue to playing a supporting role and address higher-order concerns such as improving workplace conditions for women and encouraging women’s participation in local decision-making processes. In states where women’s participation is weak and indicative of administrative discrimination in allocation of work, policies have to focus on sensitising MNREGA staff to gender issues and enabling women to access work opportunities.