Investment in Pakistan: Prospects and challenges for India 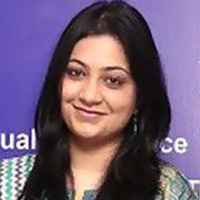 With the growing importance of India as a leading source of FDI in South Asia, and Pakistan’s liberal investment policies, there is great potential for Pakistan to attract FDI from India. This column examines prospects and challenges for Indian investment in Pakistan, and recommends policies that can create a mutually beneficial business environment for the two nations.

In today’s globalised world, South-South cooperation has emerged as an important way to stimulate regional integration, job creation and economic development. If we look at South Asia, there are two facets that point to ample scope for South-South cooperation in terms of investment. First, India has emerged as a leading source of foreign investment in South Asia, accounting for over 90% of the total intra-regional Foreign Direct Investment (FDI) flows (Athukorala 2013). Second, India’s neighbour, Pakistan has the most liberal investment policy for investment in the region (KPMG 2013, Board of Investment, Pakistan 2013).

Thus, there is great potential for Pakistan to attract FDI from India. Although Pakistan has always followed a liberal and non-discriminatory FDI policy towards all countries, including India, until 2012 India had restrictions on outward investments to and inward investments from Pakistan. In a major confidence-building measure, India overturned the ban in August 2012. Both inward and outward investment must be routed through the “approval” route, which requires prior approval from the Reserve Bank of India (RBI).

In the case of India and Pakistan, FDI can serve the twin objectives of contributing to overall economic development of both countries, and strengthening long-term bilateral relations. The normalisation of economic relations between the two South Asian giants is also crucial for the economic integration of the South Asian region.

In this column, I examine the prospects and challenges for Indian investment in Pakistan, and recommend policies that can create a mutually beneficial business environment for India and Pakistan.

Prospects for Indian investment in Pakistan

Pakistan occupies a key strategic location, between the Middle East, East Asia, Central Asia and South Asia. As a consequence, it offers potential opportunities to foreign investors from India as it can act as a transit corridor and enable India access to Afghanistan, Iran and Central Asian states1. This strategic location, along with recent investments in ports, highways, pipelines etc., will throw up vast new opportunities that can be highly attractive (Husain 2007).

As a result of policy reforms and liberalisation measures undertaken since the 1980s, Pakistan today offers one of the most investor-friendly and liberal investment regimes in the South Asian region. The government of Pakistan has put in place a policy framework on FDI that is transparent, predictable and easily comprehensible. Foreign investment in Pakistan is at present regulated by the ‘Investment Policy 2013’. The policy consolidates and liberalises existing policies by related line ministries, besides drawing up futuristic strategic programmes to implement the policy. The investment policy offers foreign investors several incentives and attractive investment packages as given below. 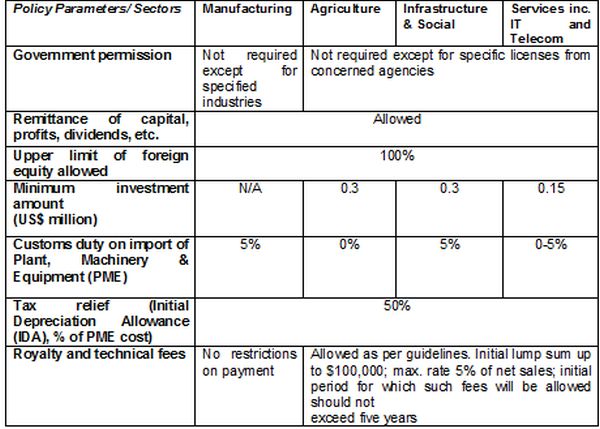 Source: Board of Investment, Government of Pakistan.

In a bid to achieve global competitiveness effectively and efficiently and to encourage industrial clusterisation2 , the Government of Pakistan passed The Special Economic Zones (SEZ) Act in 2012. The incentives offered by the investment policy stay fully protected through this Act. Within the zones, the Board of Investment offers one-window facilitation services to investors, in terms of providing information, and facilitating and authorising investment. The SEZs are expected to reduce the cost of doing business, enhance productivity, encourage investments and bring Pakistan on the international radar by offering a liberal investment regime and adequate physical infrastructure (Board of Investment, Pakistan 2013).

Indian investment in Pakistan can also benefit from several country-specific advantages. The common culture and language in the two countries can immensely facilitate business cooperation. The language spoken is the same in the two Punjabs; even in the two main financial centres of the two countries - Karachi and Mumbai - Sindhi is spoken. There is a certain sense of connect with people across the border. Smooth communication channels help in business interactions by reducing entry and transaction costs.

Existing barriers to investment in Pakistan

Despite the investor-friendly FDI policy offered by the Pakistan government, investment from India has not yet entered the Pakistani market. There are tangible and intangible barriers to investing in Pakistan: these include deteriorating law and order situation, poor macroeconomic performance of the economy, rampant corruption, non-transparent regulatory system, poor and inadequate infrastructure facilities, complex tax structure, and restrictive visa regime. However, there are two major barriers that might impede investment flows from India, in particular:

Lack of political stability: Political stability is extremely important for normal macroeconomic environment and business activity in a country. It enhances the probability of attracting FDI inflows by building confidence among investors. Several studies show that the degree of political stability is an important factor that investors consider when entering business and it significantly affects FDI flows (Lambsdorff 1999, Singh and Jun 1995). Multinational Corporations (MNCs) prefer to invest in locations that are economically and politically stable, so as to minimise their risks. While Pakistan has a business-friendly and conducive investment policy, investments may not be forthcoming because the country has been suffering from instability in its political system (Poon 2000, Brada et al. 2005, World Bank 2011). This can be identified as the most import barrier to receiving large inflows of FDI from countries including India.

Banking and Financial Services: Banking channels play a catalytic role in promoting and facilitating investment flows, because they guarantee payments that are essential for building new and lasting business partnerships. The extent to which investment potential can be realised depends on the availability of banking and financial services between India and Pakistan. However, currently there are no Indian banks in Pakistan and no Pakistani banks in India. So, even though the FDI policy allows for repatriation of dividends freely, this is not possible directly and easily for Indian and Pakistani investors unless there are banks that operate in each other’s country. In the absence of such a mechanism, profits are routed via third party banking arrangements or correspondent banks3.This causes delays in payments, increases cost, and also raises issues of double taxation and overseas transaction tax.

If India and Pakistan open bank branches in each other’s country, then transactions can get processed within a day or so.

Given the lucrative Pakistani market, geographical proximity of the two countries, and access to the Central Asian Republics, Afghanistan and Iran that Pakistan could make available to India, there is a strong case to encourage Indian investment in Pakistan. As the FDI regime between India and Pakistan is liberalised, much remains to be done on both sides to facilitate and enhance investment flows. In addition to addressing the regulatory and administrative challenges that Pakistan faces in attracting investment from India, there is a need to address the information asymmetry that restricts investment flows between India and Pakistan. There is lack of awareness and apprehension among investors regarding business opportunities in the other country. Informal events like road shows, trade fairs and exhibitions can help create awareness of existing business opportunities, and create sustained interest in bilateral business, regular exchanges and interaction.

Innovative solutions are needed to increase investment flows. The Indian government can set a precedent by taking the initiative to invest in Pakistan. This will send encouraging signals to private investors. When a region is not conducive for business, public investment by a foreign country can have a demonstration effect that leads to additional projects by private investors of the foreign country. A good example of this is the investment by the Indian public enterprise Oil and Natural Gas Corporation (ONGC) Videsh Ltd. for exploration of oil and natural gas in Afghanistan, which has generated confidence among investors and has paved the way for future private foreign investment in Afghanistan.

India and Pakistan can learn from Jordan and Israel that face continuous tension along their common border. The areas on the border between Jordan and Israel have been designated as ‘Qualifying Industrial Zones’4 (State of Israel, Ministry of Economy). Initially, only a few Jordanian companies took advantage of this because they faced hostility in doing business with Israel; but gradually, more Jordanian businesses began to set up establishments when business considerations began to overshadow political hostilities. India and Pakistan can learn from the success story of business development between these two neighbouring nations with a background of political hostility. Pakistan could also consider setting up a SEZ near Lahore with special incentives for investors. By using Pakistan land, manpower, and other resources, such SEZs would generate employment in Pakistan and foster economic development in both countries.

Such innovative solutions should be complemented by an appropriate legal framework to incentivise and secure investment. As a next step, the governments should work toward signing a bilateral investment treaty that protects and promotes investments on a reciprocal basis and includes provisions on fair and equitable treatment, protection from expropriation, and national treatment5 (Taneja and Bimal 2012). A well-defined dispute settlement mechanism to address issues faced by investors can also go a long way in building a conducive and strong business environment between India and Pakistan. These steps will enhance economic relations between India and Pakistan and could play a critical role in improving overall bilateral relations between the two countries.