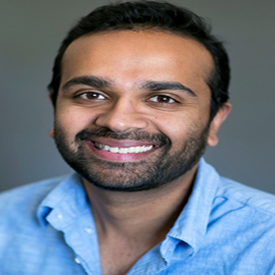 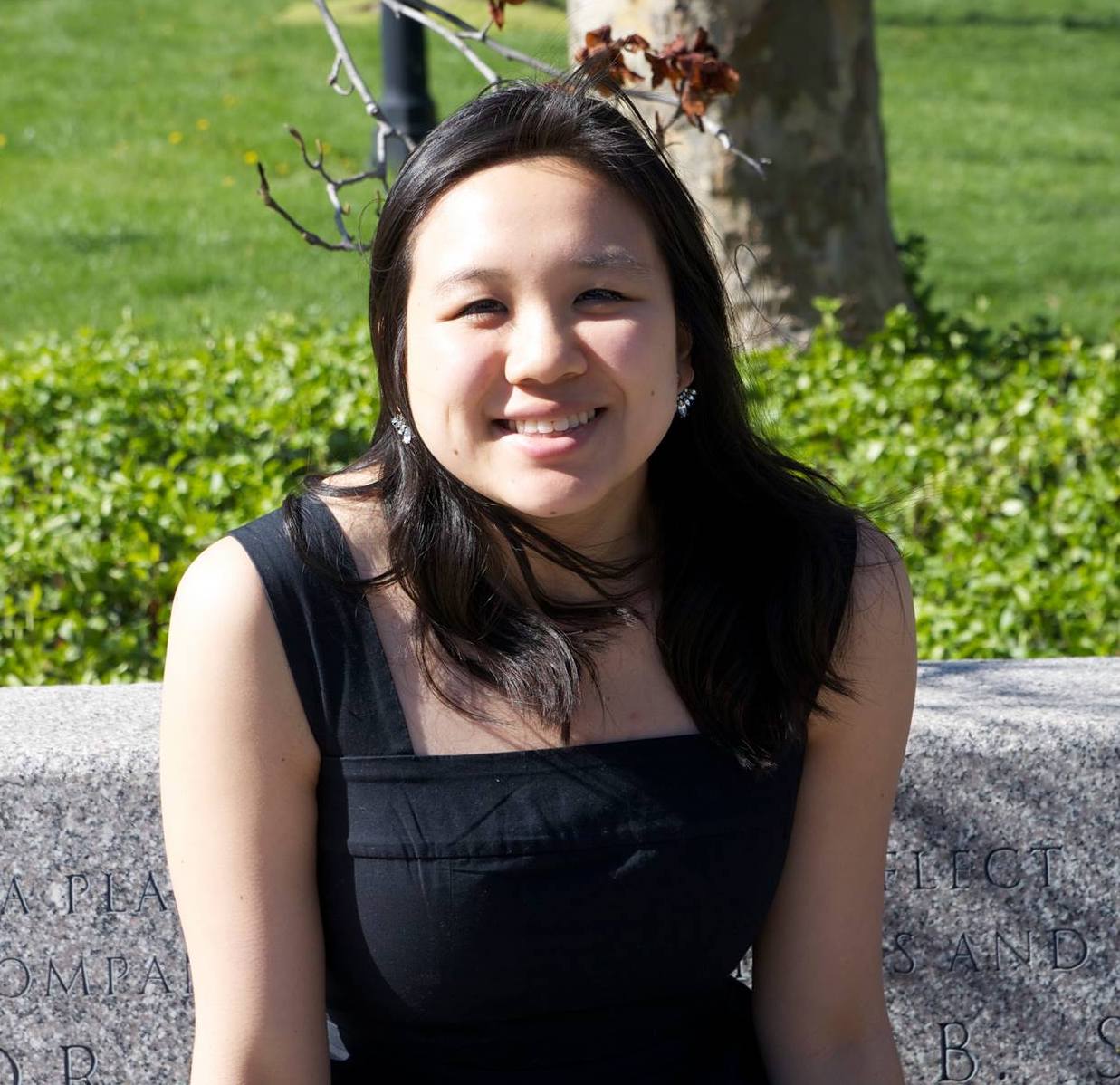 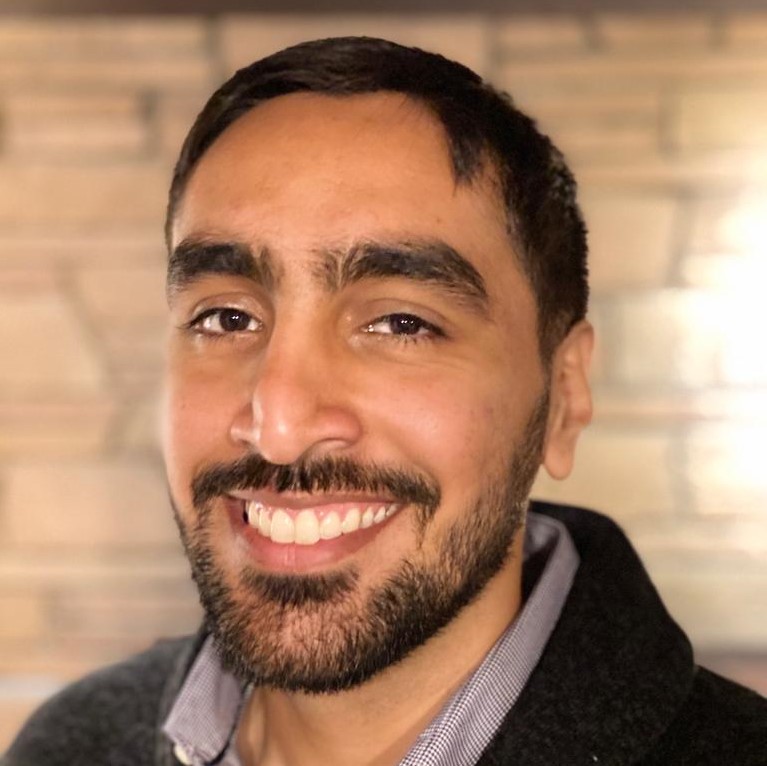 Women and children are made particularly vulnerable by displacement – the high incidence of gender-based violence and vulnerability to child marriage is well-documented in literature. Using data from Pakistan’s 1973 Housing, Economic, Demographic Characteristics survey, this article examines the impact of displacement during the partition of India (1947-1949) on the outcomes of young women, and finds that adolescent displaced women were more likely to get married at the time of partition, and experienced higher child marriage and fertility rates.

Displacement, or forced migration, generates tremendous risks, ranging from loss of life and property to the possibility of long-term physical and psychological harm1. Empirical research on the impacts of displacement on individuals is notoriously difficult because of issues such as non-random selection of displaced populations, lack of data during periods of displacement, selection due to mortality, choice of destination, and so on. Yet, such research is crucial because millions of people are displaced every year (United Nations High Commissioner for Refugees (UNHCR), 2019) and millions are at risk of displacement due to political, economic, or climate-related reasons (International Displacement Monitoring Centre (iDMC), 2017).

Women and children are made particularly vulnerable by displacement. The high incidence of gender-based violence towards displaced women has been well-documented (UNHCR, 2003, Brookings Institution, 2014). Displaced girls may also be particularly vulnerable to child marriage (Karasapan and Shah 2019, United Nations Children’s Fund (UNICEF), 2014). Marriage-related outcomes – such as age at marriage and partner characteristics – have been shown to impact human capital investments and long-term fertility outcomes (Jensen and Thornton 2003, Field and Ambrus 2008). In a recent study (Lu et al. 2021), we contribute to the evidence on the impacts of displacement on women and children, by studying their marriage market outcomes.

Using 12 representative datasets across seven countries, we document differences in age-specific marriage rates between recently displaced women and non-migrant women as an informative descriptive exercise2. These surveys – which are publicly available from IPUMS International – contain information on the cause and timing of the respondent’s most recent migration as well as marital status. We define recently displaced individuals as a subset of migrants whose cause of migration was insecurity, war, violence, or natural disaster, and who migrated up to five years before the time of survey. Non-migrant women who have never migrated in their lifetime were chosen as the comparison group3.

Notes: (i) The figure shows the effects of displacement on age-specific marriage rates between recently displaced and non-migrant individuals of a given gender, as indicated along each panel. (ii) The dependent variable is whether the respondent has ever been married, and data is pooled over all countries and survey years, excluding the 1973 Pakistan survey.

While the pattern we document is fairly strong and consistent, it could be at least partially driven by factors other than displacement such as the non-random selection of displaced populations, and timing of displacement. To strengthen the evidence, we study the outcomes of women displaced during the large-scale migration episode caused by the partition of India in 1947.

Evidence from the partition of India in 1947

The end of British rule in India in August 1947 resulted in the partition of India into two countries – the Hindu-majority State of India and the Muslim-majority State of Pakistan. The partition led to one of the largest and most rapid migrations in human history. By 1951, an estimated 14.5 million people were displaced along religious lines, with 6.5 million displaced into Pakistan (Bharadwaj et al. 2008). We focus on Muslim women who were displaced into the Punjab province of Pakistan in the period right after partition. Figure 2 reports the migration timing of Indian-born women into Pakistani Punjab. A vast majority of displacement induced by partition occurred from 1947-1949. After partition, the sudden inflow of non-selected migrants who were culturally, ethnically, and linguistically similar to people from Indian Punjab means that Pakistani Punjab provides a unique opportunity to strengthen the evidence on the impact of displacement on marriage outcomes found in the cross-country analysis. 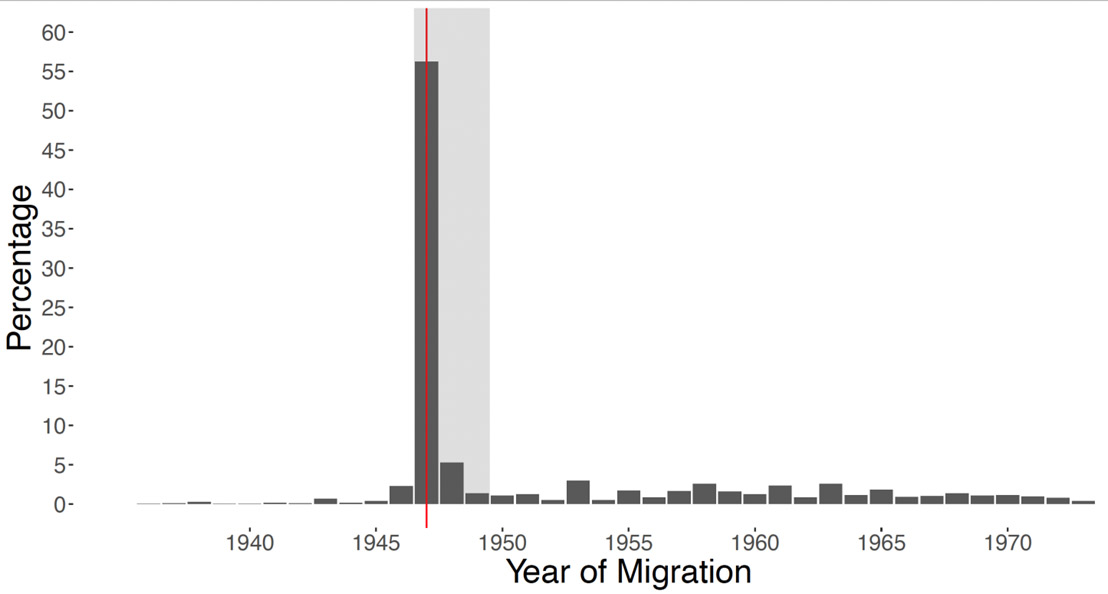 Note: The figure shows the empirical density of the year of last migration for women born in India. This is calculated as 1973 minus years since last migration, as reported in the 1973 Pakistan HED survey.

We use data from Pakistan’s 1973 Housing, Economic, Demographic Characteristics survey, which was collected approximately 25 years after partition. The survey data allow us to observe marriage timing (age at first marriage), spousal characteristics, education attainment, and long-term fertility for women. We define individuals displaced by partition as those who moved to their current locality in Pakistan during the peak migration period between 1947 and 19494. 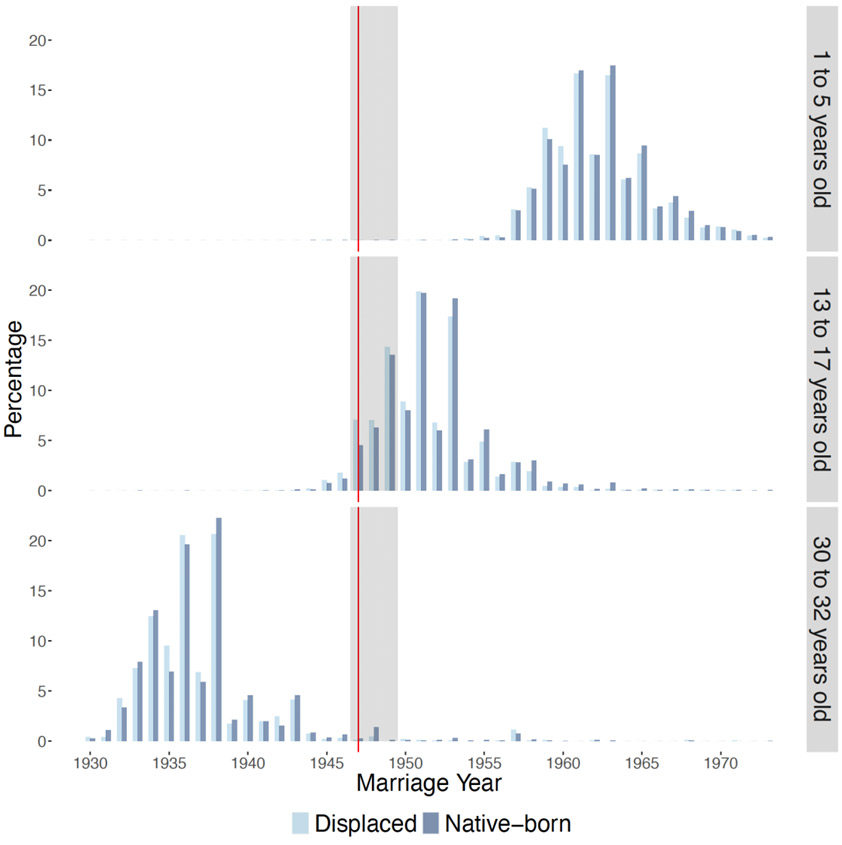 Note: The figure shows the year of marriage of displaced and native-born women across different age cohorts.

In contrast, the impact on marriage timing for displaced female children (those aged 1-5 years at the time of partition) is much weaker. There is some evidence of delayed marriage, but the impacts are not statistically significant. Displaced children have higher levels of literacy and primary school completion. They do not have higher fertility in terms of children born, but have more surviving children. Our results for both age groups are consistent with the existing literature on the impacts of early marriage on women (Jensen and Thornton 2003, Field and Ambrus 2008).

We emphasise three mechanisms that are consistent with our findings. First, the partition of India is particularly significant due to the scale and prevalence of violence against women that took place (Bhasin and Menon 1998, Butalia 2017, Das 2006). The salience of this risk may have induced families to marry off young women if married women were believed to be more ‘protected’ by the presence of a male spouse.

A second mechanism is the possibility of a negative wealth and income shock. Displacement is associated with the loss of physical property and assets. Additionally, displaced individuals face short- and long-term income losses as they leave their pre-existing sources of income and are forced to relocate to places where there might be a lack of job opportunities (for example, refugee camps) or where their skills sets may not be well-suited (for example, rural to urban migration). Under these circumstances, displaced parents might consider marrying off their young daughters to alleviate financial constraints (Corno et al. 2020).

Third, displacement events may generate changes in the composition of the marriage market that are consistent with our findings. Previous work (Bharadwaj et al. 2008) shows that the displaced population in Pakistan had higher male ratios than the non-displaced population. In our context, there were very low cross-marriage rates between displaced and native-born people. The excess supply of men might have differentially increased the demand for women among the displaced group and led to the earlier marriage of displaced women.

Though we are unable to provide direct evidence on any mechanism, consideration of these mechanisms is important as they might imply different welfare consequences for women. Current literature suggests early marriage has detrimental consequences for women through lower human capital investments and higher fertility (which our results are consistent with), but the question of what early marriage during a time of displacement means for women’s welfare is a crucial one which we are unable to answer fully – making this is an important question for future research in this area.