Policymakers in both developed and developing countries want to make cities more competitive, attract new entrepreneurs, boost economic growth, and promote job creation. This column shows that the two most consistent factors that bring entrepreneurs in manufacturing and services to a district in India are its education and quality of local physical infrastructure.

Understanding these traits from a developing country perspective is important. The roles that education or infrastructure, for example, have for competitiveness and entry of new entrepreneurs in an advanced economy like the United States may be quite different from a setting like India. Likewise, we have extensive evidence on the importance of agglomeration economies1 in advanced countries, but the relevance of these patterns in developing economies has not been consistently established.

We examine these questions for manufacturing and services in India for 630 districts spread across 35 states/ union territories (Ghani et al. 2012). Within these two industry groups, we also compare the formal and informal sectors. We quantify factors and traits of districts and industries that systematically lead to more entry of new firms.

We examine the role of demographic traits (age profiles, population, population density), structural traits (education of the local labour force, quality of local physical infrastructure, travel time to major cities, stringency of labour laws, and household banking conditions), and agglomeration economies. While these traits do not constitute an exhaustive list of local conditions, they are motivated by the literature on India’s development.

We develop metrics that unite the incumbent industrial structures of districts with the extent to which industries interact through the traditional agglomeration channels discussed since Alfred Marshall. The first agglomeration channel is proximity to customers and suppliers, which reduces transportation costs and thereby increases productivity. The second is the Chinitz effect, which descends from the work of Benjamin Chinitz (1961) on how small-scale suppliers can provide specific aid to new firms. The third channel is labour pooling, which picks up on the themes of specialised workers tightly clustered together. These metrics unite the industrial structures of cities with the degree to which industries interact.

Table 1 tabulates our key findings for the sectors. The first column considers the organised manufacturing sector. An initial unreported analysis considers first the predictive power for entrepreneurship of a parsimonious regression that includes district populations, district-industry employments, and industry fixed effects as explanatory variables. Not surprisingly, existing district-industry employment strongly shapes the spatial location of entry: a 10% increase in incumbent employment raises entry employment by around 2%. In addition, a district’s population increases entry rates with an elasticity of 0.5. 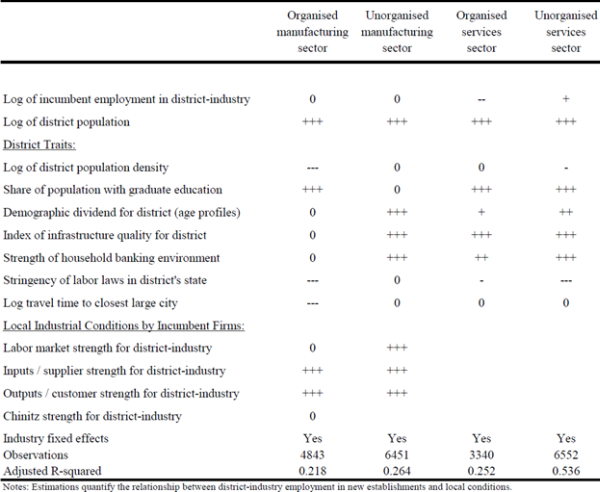 The reported tabulation in Table 1 further includes district traits and agglomeration economies. Three factors stand out as discouraging entrepreneurship in organised manufacturing: high population density, strict labour regulations, and greater distance to one of India’s ten biggest cities. The first pattern has been observed in many settings. The traded nature of manufacturing products allows more rural settings for firms, and manufacturers often seek cheaper environments than the wages and rents associated with high density areas. The second pattern connects with the earlier studies of India that argue strict labour laws reduce economic growth (Panagaria 2008). Entrepreneurship in labour intensive industries is disproportionately reduced by strict labour laws. The final factor highlights that while manufacturers avoid the high costs of urban areas, they also avoid the most remote areas of India in favour of settings that are relatively near large population centres, likely to access customers directly or to connect to shipping routes.

The education of a district’s workforce is strongly linked to higher entry rates. The elasticity is in fact stronger in economic magnitude than that evident in comparable studies of advanced economies.

Looking at agglomeration economies, the qualities of input and output markets are exceptionally strong with 0.4-0.5 elasticities. Labour market and Chinitz measures have positive coefficients but are not statistically significant. The decline in the main effect of incumbent employment suggests that these four new metrics capture the positive channels of agglomeration on entry.

The other two district/ city traits that are associated with strong entry rates are the strength of local, within-district physical infrastructure and the strength of local household banking environments. This contrasts with organised manufacturing entry, where education stood out. An intuitive explanation, which is also reflected in the services estimations, is that these patterns and their differences reflect the factors on which each sector depends most. Organised manufacturing establishments, for example, may have broader resources that reduce dependency on local infrastructure and household finance. Likewise, the unorganised sector depends less on educated workers than the organised sector.

Agglomeration economies operate as strongly for entrants in India as they do in advanced economies. Extended results break these effects down by entrant size. The importance of the Chinitz effect is concentrated among small entrants. The importance of overall output markets and labour spillovers grow with entrant size. It appears that input cost factors are more influential in the location choices of small start-ups in India, while output conditions and labour markets are more important for large entrants3.

India’s city competitiveness and industrial landscape is still taking shape: A comparison of India with United States shows that the existing city population levels, city-industry employment, and industry fixed effects can explain 80% of the spatial variation in entry rates in US. The comparable explanatory power for India is just 29% for manufacturing and 33% for services. A large portion of this gap is due to India being at a much earlier stage of development. The industrial landscape is also adjusting after the deregulations of the 1980s and 1990s. At such an early point and with industrial and urban structures not yet fully entrenched, local policies and traits can have profound and lasting impacts by shaping where industries plant their roots.

Agglomeration economies are very important for India’s entry patterns: We find strong evidence of agglomeration economies in India’s manufacturing sector. In a similar manner, we find extensive evidence that the incumbent compositions of local industries influence new entry rates at the district-industry level within manufacturing. This influence is through both traditional Marshallian economies like a suitable labour force and proximity to customers, and through the Chinitz effect that emphasises small suppliers.

Human and physical infrastructure matter greatly: The two most consistent factors that predict overall competitiveness and entrepreneurship for a district are its education and the quality of local physical infrastructure. These patterns are true for manufacturing and services. These relationships are much stronger in India than that found for the United States. Higher education in a local area increases the supply of entrepreneurs and increases the talent available to entrepreneurs for staffing their companies. Investment in people is an easy call for policymakers. Likewise, local areas must improve their infrastructure — electricity, roads, telecom, and water/ sanitation facilities.

Urbanisation: India is now at the forefront of a major population shift from a largely rural population to a rapidly urban one. Nearly half a billion more people will live in the urban areas in India, with the urban population more than doubling over the next 25 years. While they present special challenges, there are also unique opportunities to make a difference and have development impacts that create jobs, reduce extreme poverty and promote shared prosperity.

More research on agglomeration economies, urbanisation and entrepreneurship in developing countries is important for urban and development economics going forward. Identifying these attributes and acting upon them is essential to foster economic growth. While focusing on entrepreneurship, one needs to also recognise that large firms also play an important role in regional development. The giant firms of India are becoming globally powerful and growing in efficiency, and they too will shape employment opportunities in the decades ahead. However, the history of regional development shows that big firms are not sufficient forever. An entrepreneurial foundation that provides for local growth and regeneration is essential for long-term success and prosperity.