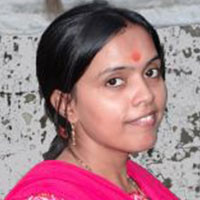 In this note, Amrita Dhiman describes her team’s visit to Jamui district in Bihar – the district that is supposed to have generated the highest number of person-days under MNREGA in its division in 2015-16. While almost all villagers they met had MNREGA cards, there was no MNREGA work to be seen, which was paradoxical given the obvious scope of work in the area.

We first took the help of the JEEViKA2 team present in the district, to reach the village. JEEViKA has presence across the state of Bihar. We were advised to visit the villages only during daytime and return by 3 pm as Chakai is a highly naxal-affected3 area. Based on a MoU (Memorandum of Understanding), JEEViKA and NGO PRADAN (Professional Assistance for Development Action) were working together in Chakai, but in different GPs. PRADAN had started its work in Bamoriya GP a few months back. So, we took the help of PRADAN team to reach Bamoriya village4.

The village was located deep inside the jungles of Palash5 and Sal trees, up in the hills. The village was only 30-35 km away from the block headquarters, but local people said that it takes nearly one hour and thirty minutes to reach the village. A stretch of the route to the village falls in the state of Jharkhand.

The initial few kilometres of the road from the block headquarters to the GP were good. Thereafter the road had been badly damaged in intermittent patches and there was no road at all beyond a point. The vehicle had to cross a river twice on the way to the village. There was no bridge on the river. The vehicle had to enter into the shallow waters between rocky undulating landscapes with steep slopes to reach the other side. It was obvious that mobility during rainy season must be coming to a virtual standstill making it almost impossible to reach the village from Chakai. Following a dusty path and driving up the hills, we reached a small plain ground where women had gathered under a tree in the village. After a while a few men also joined the discussion. Overall, more than 50 people had gathered there from mainly three villages - Bamoriya, Panna, and Duberdih.

Almost everyone had yellow-red coloured job cards in their hands. When asked about the usefulness of the card, a majority replied that they do not know, while a few said that they thought of getting some kind of benefit from the government through the card. Upon further probing, they said that they had to pay Rs. 20 per head for getting the card (under MNREGA, job card with photograph is to be provided free of cost). We discovered that the cards were mostly of three issue dates: 8, 9, and 10 December 2008. In quite a few cards, the names were incorrect. Often, the husband’s name was right while the wife’s name was wrong. Since, the cards had not been updated since 2008 the names of women who were now married were not mentioned in the cards. The names of boys who had attained the age of 18 after 2008 had not been updated.

The MNREGA MIS (management information system) shows that 39,073 person-days of work had been provided to the people of the GP during 2015-16. However, none of the job cards had any entries; they were all blank. People told us that since they got the cards, no one ever asked them to do any kind of MNREGA work and they have not received any benefit through the card. This was rather paradoxical given the obvious scope for work in and around the area. 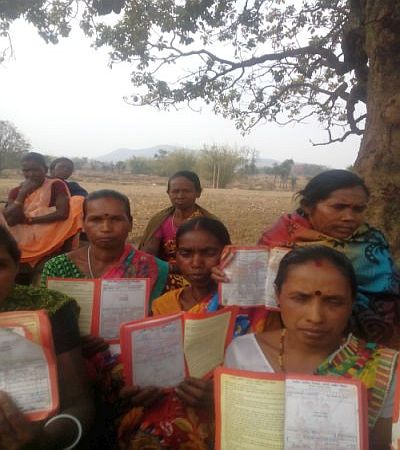 The men that we spoke to were mostly above 40 years of age. This confirmed the statement of a lot of the women that their husbands had migrated to places like Giridih in Jharkhand, Kolkata in West Bengal, Hyderabad in Telengana, Haryana and Punjab to find work. The women further corroborated that the forest is their source of livelihood. They collect the leaves of Sal tree for making pattal6. They also collect wood from the forest and go to the market to sell it and earn some money. Such activities consume a major part of time in their daily lives.

The area had sandy soil with complete dependence on rains for irrigation. The families typically owned small pieces of land, which were mostly cultivated once a year to grow paddy or maize.

The area receives nearly 1,000 mm of annual rainfall but being a hilly region, the water drains off towards the plains. Therefore, there is a severe need for water and soil conservation. No such work was visible, and discussions with locals confirmed that no efforts had been made towards this end.

We also met the official in charge of implementing MNREGA in the district, and enquired about Bamoriya having generated highest person-days during 2015-16 on paper, while there seemed to be no MNREGA work in the area. The first response we got was that Bamoriya is a naxal-affected area, which is very difficult to reach, and that we should not have travelled here.

Further, he said that sometimes this happens due to polarisation: the mukhiya (village head) has his own set of people who may be favoured for receiving work under MNREGA. He said that the GP is performing well. A few days back, an officer had been asked to investigate MNREGA work here and a positive report had been submitted.

As per MNREGA guidelines, it is clearly specified that no contractors and no labour-displacing machinery is to be used in the execution of works. The PRADAN staff told us that a local activist from Chakai had complained about the use of machinery in MNREGA works in the block. In this regard, the district official said that the district has hard soil which is difficult to dig and upon enquiry, the villagers had accepted that they had used machinery for this reason. While no one from the village mentioned any kind of MNREGA work nor did we notice any, the question remains whether it is really the poor villagers who were using machinery or someone else.

Figure 1. Theory of change for success of MNREGA 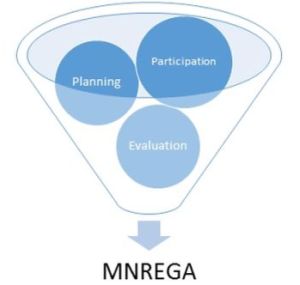 However, the ground reality seems to be far from this concept of inclusion. People are neither informed nor involved. Thus, lack of information, education and communication (IEC) becomes a major bottleneck leading to failure of people-centric schemes like MNREGA.