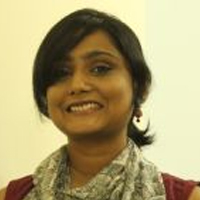 River Brahmaputra which flows across the Northeast Indian state of Assam, carves out a network of nearly 2,300 islands, isolating them from the mainland and excluding their inhabitants from access to basic infrastructure and health facilities. Based on her fieldwork, Anjali Mariam Paul describes the working of an innovative intervention in health communication – a non-commercial grassroots community radio station for these river islands.

Assam, one of India’s largest states and the most populous in the Northeast, boasts of a topography which has valleys, hills, and one of Asia’s most destructive rivers - the Brahmaputra - which flows across the state, carving out a network of nearly 2,300 islands, excluding them from the mainland. These river islands, called chars in Lower Assam and saporis in Upper Assam are home to nearly 10% of Assam’s population (close to 3 million) who lack access basic infrastructure and services like health, education, power, sanitation and in some cases, even drinking water. The peculiarity of these river islands is that they are constantly getting eroded, apart from being prone to heavy rains and flooding, which makes transport and communication very difficult not only during heavy monsoons but also in ordinary circumstances. Such geographical vulnerability manifests in poor human development indicators including very high maternal and infant deaths compared to the rest of the country. According to the National Family Health Survey (NFHS-4), the Maternal Mortality Rate (MMR) is 328 per 100,000 live births and the Infant Mortality Rate (IMR) is 48 per 1,000 live births, both of which are the highest in the country.

Boat clinics and ‘stations of hope’

Since 2008, boat clinics funded by the National Health Mission have been set up by C-NES (Centre for North East Studies) across 13 districts of the state. These are the brainchild of Mr. Sanjoy Hazarika who saw the health of the island-dwellers as a major concern, and have been fulfilling the needs of a large number of island-dwellers. Over the past 8-9 years, these boat clinics have organised health camps on reproductive health, maternal and child healthcare, family planning, disability and autism awareness, sanitation and hygiene, among many others.

In 2009, as a supporting initiative to address the exclusion of several communities in Assam, C-NES went one step further and launched the Brahmaputra Community Radio Station (BCRS) in Dibrugarh district. This was the first non-commercial grassroots community radio station in Northeast India. This community radio was set up to cater to marginalised communities in the tea gardens and other villages, which speak local languages and dialects that mainstream radio failed to include in their programmes. It was also intended to be a platform for members of these communities to interact and exchange ideas about what was being done in their respective communities to tackle everyday issues like sanitation, hygiene, and public health.

BCRS’s station coordinator has been narrowcasting programmes since its inception and he ecstatically explained how it covers a population of 500,000 in Dibrugarh and 400,000 in Dhemaji, across a radius of 15 km. They now broadcast and narrowcast programmes in five languages: Assamese, Bhojpuri, Bodo, Mising, and Shadri (a tea-tribe dialect).1 The radio reporters are recruited from these five communities spread across the diverse area of Dibrugarh, covering 30 sprawling tea gardens, a large stretch of the Brahmaputra with 14 islands and close to 180 villages, as well as from a range of ethnic, cultural and language groups of Upper Assam districts, making this a great achievement. After visiting communities and undertaking research, the BCRS team broadcasts shows between 9 am and 7 pm, seven days a week.

The team consists of community reporters who go to the communities and actually dig out the pressing issues prevalent there which cater to all age groups, and cover topics ranging from women’s health and required children’s nutrition to schemes about the same which have been implemented by the government. Not only do they broadcast programmes in these areas in their local language, but also narrowcast important programmes in certain areas about topics which they feel are highly important for women or children. They narrowcast these by mobilising a large number of women and children and ensuring that they sit through the entire programme. This is a method by which BCRS directly intervenes in prevailing issues in the communities, along with community quizzes on relevant topics. These also serve as feedback loops as the reporters then know which areas need to be covered more through their radio programmes, based on the community participation.

BCRS tries out innovative programmes to make health communications more effective. For example, it airs programmes where they interview an accredited social health activist (ASHA), an anganwadi2 worker, or an auxiliary nursing midwife (ANM), about their work with the communities, making it highly transparent and gratifying while also acting as an incentive for the community health workers to receive appreciation for the work they have done. 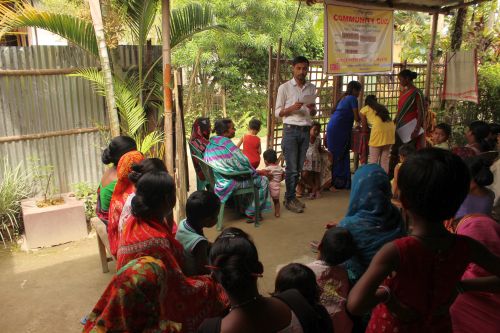 BCRS also organises community quizzes. I had the opportunity to observe one such quiz. It was held at an anganwadi centre, attended by 36 women who lived in the vicinity, and publicised and conducted by the community reporter. It lasted for about two hours and the women were quizzed about things they were expected to know about their children’s health, their own wellbeing, and the available government schemes. The quiz began with simple general knowledge questions as to who the Chief Minister of Assam was or how many months of the year have 31 days, and slowly moved into health and nutrition facts such as what fruits are rich in Vitamin C, what Vitamin A deficiency causes, what food contains iodine, what is to be taken when there is a bout of diarrhoea, what mother’s milk contains that helps build immunity of the child etc. The team had also cleverly snuck in questions on many state schemes which the women could avail like the Mamoni Scheme3 or the Janani Suraksha Yojana4. At the end of the session, prizes were distributed to the women who gave correct answers, and feedback was taken from participants. The participants said that the quiz gave them a chance to learn about a lot of things they did not know earlier, and indicated that they were willing to attend these sessions again. The BCRS team use findings from such sessions to plan programmes to further enhance awareness among the target communities.

While speaking to a few of the women who attended the quiz and the ASHA workers who were also present, I learnt that the female tea estate workers’ children attend school; the women access the nearby hospitals in times of general illnesses and medical emergencies; and all of them had delivered their babies in a hospital and not at home. They seemed to be aware about the different government schemes and the ASHA also affirmed that these women were availing the government schemes made available to them.

In socially excluded and geographically secluded areas like the river islands, tea gardens, and slum pockets in Dibrugarh, innovations like BCRS are their best bet to be aware of different health issues, best health practices, and available health schemes. Recruitment of reporters from the communities, efforts to identify and cover issues of local importance, and interactive forums to share information, are some of the innovative features of BCRS that reorient modes and channels of communication. There is plenty of evidence (Obregón and Waisbord 2010; Kyomuhendo 2004) to show that linear dissemination of health information fails to connect with communities. There is an urgent need to innovate in areas such as maternal and child healthcare, and such initiatives remind us that there is still hope left in getting help to where it is needed the most.

This article is based on an independent study by the author during May and June 2016. The author gratefully acknowledges the guidance of Prof. Arima Mishra, and facilitation of fieldwork by the C-NES team.