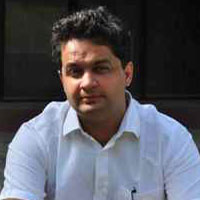 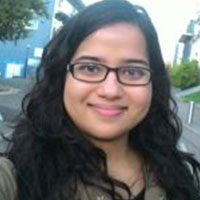 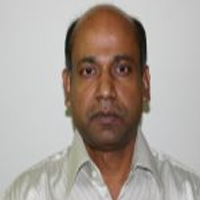 Central banks in emerging markets grapple with understanding the inflationary impact of grain procurement shocks because the precise link between the agriculture sector and the rest of the economy may not be well understood. This column presents a framework to understand how the government’s grain procurement policy in India can be inflationary, and what the appropriate monetary policy response should be.

Understanding monetary policy design in emerging markets is a growing area of research. One aspect missing in this literature is how distortions in the agriculture sector amplify the impact of a variety of shocks on output and inflation dynamics. Many developing countries, like India, have large agriculture sectors which are inherently volatile. In India, the combined agriculture sector (agriculture, forestry and fishing) comprises 17% of GDP (gross domestic product) (at constant 2013-14 prices). The employment share of the agriculture sector in India is also large: 47% in 2013-14. The Indian government periodically intervenes in the agricultural sector, especially in the foodgrain market, by directly procuring grain from farmers to create a buffer grain stock to smooth price volatility and for redistribution to the poor. As part of the procurement policy, the government announces minimum support prices (MSP) before every cropping season for a variety of agricultural commodities. MSP is the price at which a farmer can sell the agricultural commodity to the government, and this is typically set above the market price. The procured commodities are then stored in Food Corporation of India (FCI) warehouses, from where parts of it are distributed to poor households. The rest of the procured produce remains in warehouses unconsumed and serves as a buffer stock to offset future supply shocks. 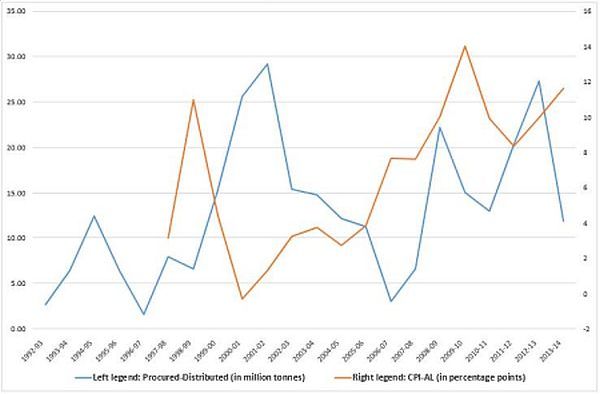 The blue line in Figure 1 above shows the net grain procured (procured – distributed) of rice and wheat in millions of tonnes by the Government of India. The average amount of net grain procured per year is approximately 13 million tonnes during the 1992–2014 period (8% of total production), while gross procurement averages 23.5% during the same period. The red line denotes inflation corresponding to the Consumer Price Index for Agricultural Labourers (CPI-AL). As can be seen, in the last 25 years, the amount of net procurement trends upwards and has become increasingly volatile. CPI-AL measured inflation also trends upwards in the same time period. Figure 1 suggests that by acting like a demand shock, procurement increases the open market price for grain because it creates a shortage in the open market. This leads to the question: are grain procurement shocks inflationary?

In our ongoing International Growth Centre (IGC) project, entitled “Terms of Trade Shocks and Monetary Policy in India” (Ghate, Gupta and Mallick 2016), we develop a three-sector (grain, vegetable, and manufacturing) closed economy NK-DSGE (New Keynesian Dynamic Stochastic General Equilibrium) model1 of the Indian economy to understand how a major distortion in the Indian agriculture sector - the procurement of grain by the government - affects inflation and output dynamics. Our analysis is motivated by a host of policy questions: should grain procurement shocks - by being potentially inflationary - affect monetary policy design? What is the inflationary impact of a procurement shock? What is the mechanism through which procurement shocks affect resource (labour) allocation in the Indian economy? We then calibrate the model to India to discuss the role of monetary policy in such a setup.

A multi-sector model with different sectors has the advantage of allowing one to understand the transmission of sectoral shocks across the economy. To this end, our model has both standard and nonstandard features. There are four entities in the economy: a representative household, firms, a government, and a central bank. Households consume open market grain, vegetable, and the manufacturing good. They supply labour to all three sectors. Labour is assumed to be perfectly mobile across sectors. The labour market is assumed to be frictionless, which means that labour can move across sectors seamlessly. There is a manufacturing sector which is characterised by staggered price setting4 and monopolistic competition5, and an agricultural sector. The agricultural sector, which is also monopolistically competitive, is further disaggregated into a grain and a vegetable sector, which are both characterised by flexible prices. The reason for this disaggregation in the agriculture sector is to incorporate additional imperfections in the agricultural market that are specific to the Indian economy.

Our model structure is most closely related to the seminal work by Gali and Monacelli (2005) and Aoki (2001). However, our framework features an explicit agriculture distortion – procurement – which is not a feature in these models.

Our theoretical framework leads to new insights on the inflationary impact of procurement shocks, and the mechanism through which inflation gets generalised.

When the government procures more grain, this increases the mark-up that grain producers charge over their marginal costs of production. This leads to higher prices in the open grain market, and inflation in the grain sector. At the same time, the increase in the price of grain reduces the real marginal costs of production in the grain sector, inducing farmers to produce more grain, and hire more labour in the grain sector. The higher demand for labour in the grain sector pushes up nominal wages as labour gets pulled out of the other two sectors in the economy (vegetables and manufacturing), leading to an increase in nominal wages in these sectors as well. Confronting higher nominal wages, vegetable producers and manufacturing firms revise their prices upwards, leading to inflation in these sectors as well. This is the mechanism through which a procurement shock gets transmitted to the other sectors in the economy and leads to generalised inflation.

We also derive a sufficient condition, under which the aggregate NKPC (New Keynesian Phillips Curve) becomes steeper which means a given output gap is now associated with higher inflation because of the distortion created by procurement8. We show that the response of the real economy to changes in the real interest rate decreases with higher values of steady-state procurement, thus requiring a stronger monetary response for a given output gap.9 The procurement distortion therefore affects the responsiveness of the economy to changes in the interest rate which affects the monetary policy response. We therefore provide a precise analytical understanding of how monetary policy, in response to a procurement shock, should depend on the steady-state value of procurement.

The theoretical predictions are also consistent with empirical evidence on the inflationary impact of procurement shocks. While our results are preliminary, Figure 2 below shows impulse response functions10 of a procurement shock on two variables namely, inflation (general-CPI) which is on the top, and the output gap on the bottom. We use quarterly data from 2004-Q2 to 2016-Q1 for these variables. As shown in the figure, on impact, the procurement shock, which has a standard deviation11 of 0.66, increases generalised (across all sectors) inflation, which increases and peaks at 6% in two quarters. Although inflation starts falling after two quarters, it still remains positive for about 6-7 quarters after that. The effect of procurement on the output gap on impact is also positive, similar to what we show in the model. The output gap increases and peaks at 1.2% in the first quarter, after which it starts falling and remains negative for most of the period before converging back to zero. 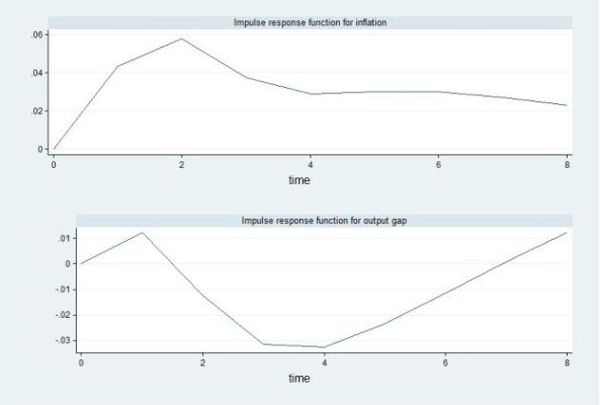 Central banks in EMDEs (Emerging markets and developing economies) grapple with understanding the inflationary impact of procurement shocks because the precise link between the agriculture sector and the rest of the economy may not be well understood. In this project, we develop a framework to understand how the Indian government’s grain procurement policy in India can be inflationary, and what the appropriate monetary policy response should be. Our analysis will be useful to both the Reserve Bank of India (RBI), and other EME central banks who want to understand how distortions in the agriculture sector amplify the impact of a variety of shocks on output and inflation dynamics in the economy.

The views and opinions expressed in this article are those of the authors and no confidential information accessed by Dr. Chetan Ghate during the monetary policy deliberations in the Monetary Policy Committee (MPC) meetings has been used in this article.