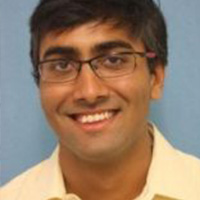 In a bid to industrialise the relatively under-industrialised states of Himachal Pradesh and Uttarakhand, the government implemented a tax incentive and capital subsidy scheme in the two states in 2003. This column finds the policy change led to new business creation and growth of existing firms in these states, most of which was not at the cost of neighbouring regions.

Location-based policies (or place-based policies) are used by governments all over the world to address regional economic disparities by providing tax exemptions and other benefits to firms to locate to economically lagging regions. Some examples of location-based schemes include Promise Zones, Empowerment Zones, and Enterprise Zones in the United States, Zones Franches Urbaines (ZFUs) in France and Regional Selective Assistance in the United Kingdom. While previous empirical work evaluating place-based policies has focused mostly on the United States and Europe, and has found mixed results1, their effects in developing countries have remained largely understudied.

Promoting industrialisation in Himachal Pradesh and Uttarakhand through location-based incentives

I fill this gap in the literature by studying the impact of a tax exemption and a capital subsidy scheme under the New Industrial Policy, for the states of Himachal Pradesh and Uttarakhand (Chaurey 2014). As part of this, starting 2003, the Government of India decided to provide 100% excise duty exemption for 10 years and 100% income tax exemption for five years, for new industrial units in the two states. The same benefits were extended to existing industrial units if they expanded their fixed capital investment by 25%. In addition, all firms were eligible for a capital investment subsidy equaling 15% of their investment in plant and machinery, up to Rs. 3,000,000 (US$50,000 approx.). This was done in a bid to industrialise the two relatively under-industrialised states – primarily because they are hilly areas, have international borders, and are covered with forests.

Three major questions come up while evaluating these policies: a) Are firms willing to move to an economically lagging region when they receive incentives? b) If firms do move, is it actually business stealing from regions that do not receive the incentives or new business creation? and c) Who gains from these policies and are these policies cost-effective for the government?

Other than the New Industrial Policy, no other policy was implemented in these two states since 2003 that may have affected industrial outcomes differentially more or less than other states. This enables me to use variation across states and time to evaluate the impact of this policy.

I combine a number of datasets to evaluate the impact of the policy change – a state-industry level panel dataset, a detailed firm-level panel dataset (both from the Annual Survey of Industries) and different household surveys (from National Sample Surveys). I use a variety of control groups2 to form valid counterfactuals for the treated units. First, I use firms in neighbouring states as the control group and then use all major states as the control group. I also compare outcomes of firms (employment, fixed capital, total output and wage bill) in districts along the border in the treated states and in the control states. Finally, I use a matching technique that uses states in India that have similar firm outcomes as the treated state before the policy came into effect. Figure 1 confirms that before the policy change, the trends in the outcomes for the treated and control states were similar and diverge only after the policy came into effect. I find similar effects, irrespective of the control group I choose.

Figure 1. Trends in outcomes in Uttarakhand and Himachal Pradesh compared with nearby states 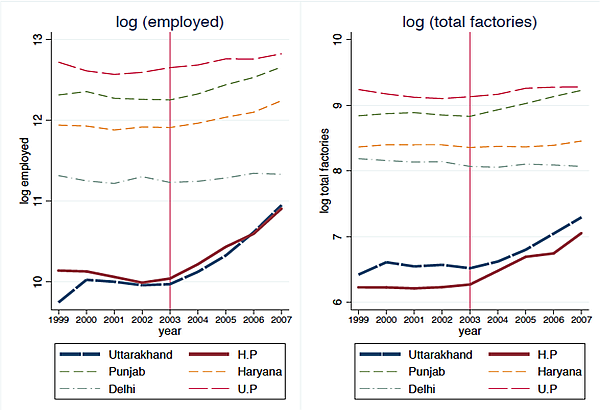 At the aggregate state-industry level, I find large increases in employment (37%), number of factories (27%), total output (57%), fixed capital (72%), and industrial wage bill (39%) in treatment states relative to control states. These results provide an estimate for the combined effect of entry of new firms and growth of existing firms as a result of the policy change. Further, I look at the impact of the policy on existing firms in the treated areas, as compared to existing firms in control areas. I find that on average, existing firms in the treated areas increased employment (7.5–11%) and output (8.7–18%), and made additions to plant and machinery (25–28%), over and above what was achieved by firms in control states. Additionally I also find that that the policy attracted larger and more productive plants to the treated areas. However, I do not find any differential effect on TFP (total factor productivity) for existing plants.

These results might imply either business stealing from control states or new business creation. To answer this, I take the following steps. First, I rule out that it is not the case that firms close down in control states to open up in the treated states. I check whether there are differentially more firm closures in the neighbouring control states than in the treated states and find no evidence for this. Then, I rule out spillovers from control to treated areas in terms of movement of investment and production by comparing outcomes in neighbouring states and districts to states/ districts located further away. The basic idea behind these tests is that it is easier to move production or investment from regions closer to the treated areas than those that are further away. I find no difference in outcomes between these two groups. Finally, there is a concern that multi-establishment firms might relocate production to their establishments located in the treated states. My results are similar when I remove the multi-establishment firms from the sample. These results suggest that indeed the policy led to new business creation and growth by existing firms and most of it was not at the cost of neighbouring regions.

This leads us to the question about the gainers and losers of the policy I look at the effect of the policy change on the local population using household surveys with information on wages, migration and rents. First, I find that the policy change led to an increase in wages for workers. This is obvious because the policy led to a large increase in the number of jobs. Theoretically, it is conceivable that the growth in employment happened with a corresponding increase in in-migration from control regions. This would lead to an increase in local rents and prices and there would be no gains in real wages for residents. However, I find that wages of workers increase but housing rents do not go up, suggesting low in-migration. I then explicitly check for differential migration of workers between treated and control states and find no evidence for it. This is consistent with prior literature in India that suggests inter-state migration is low (Munshi and Rosenzweig 2009, Topalova 2010, Hnatkovska and Lahiri 2013). However, to be clear, this is permanent migration of workers and not temporary migration. It is possible that workers migrate for a short period of time to the treated states. There is however, no available data on temporary migration.

Cost effectiveness to the government

Finally, to get a sense of the cost-effectiveness of the policy, I do a back-of-the-envelope quantitative assessment of the policy. I calculate the gains of the policy as the sum of the gains accruing to firms as profits, to landowners as rental rate gains, and to workers as real wage bill gains. I calculate the costs of the policy as the foregone tax revenues from excise taxes and corporate income taxes and the actual costs of the capital subsidy (assuming every firm got the maximum amount of the capital subsidy). My estimates suggest that the benefits outweighed the costs (in terms of 2007-08 figures) – because the increase in economic activity in the two states was much larger than their existing economic activity. Comparing the costs and benefits, gives us a figure of Rs. 16-30 billion (US$ 260-480 million approx.) in benefits from the policy change. This is roughly 0.26-0.5% of the combined Gross Domestic Product (GDP) of the two treated states in 2007-08 figures.

The results of my research, thus, inform policymakers about the efficacy of location-based policies for industrialising backward regions. In this context, I observe large responses of firms to tax benefits, but very little migration response by individuals. This suggests that it might be easier to provide incentives for firms to move to a particular location than to move workers. Especially in settings with low labour mobility, such spatially-targeted policies could be a cost-effective way to generate employment, output, and real earnings gains for workers.

An important caveat is that these results are at best medium-term effects (until 2007-08) of the policy change (in 2003) on various economic outcomes. It will be interesting to look at the long-run impacts of this policy after the removal of the incentives. Whether or not such policies have a lasting impact (for example, agglomeration economies) or only attract fly-by-night operators that shut shop and relocate to the next area with such benefits is an important issue but beyond the current scope of my research. With more data available in the following years, this seems to be a promising avenue for future research.