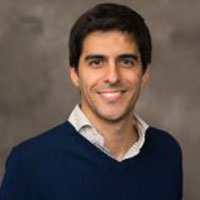 In the context of the ongoing global debate on migration policies, this column shows that the H-1B visa programme of the US had a powerful impact on the US IT sector, and played a prominent role in spreading the boom to India.

Technological innovations in the early 1990s unleashed rapid developments in the US IT sector. With the entry of Amazon, eBay and Yahoo, the usage of the Internet for commercial purposes grew quickly, expanding the demand for computer scientists in the US. Computer programming and software development were the fastest-growing occupations in the 1990s, a growth that was, in many ways, sustained by high-skill immigration. By the turn of the century, however, this boom had surprisingly spread halfway across the world to India, and by 2005 India had outpaced the US in software exports. In our research (Khanna and Morales 2017) we show that the H-1B visa programme had a powerful impact on the US IT sector, and played a prominent role in spreading the boom to India.

Even as computer science (CS) occupations were growing in the US, the number of CS immigrants was growing faster still. In 1994, the fraction of foreigners in CS occupations was 9%, but rapidly rose to 24% by 2012. This high-skill migration was almost entirely driven by Indians (Figure 1). By 2014, 70% of all H-1B visas, and 86% of all CS H-1Bs were acquired by Indians; with only 5% being awarded to Chinese nationals. Since CS wages are at least 4-10 times higher in the US than in India, the likelihood of migrating abroad raised the expected returns from becoming a computer scientist in India, and more and more students enrolled in engineering colleges – many of which started to offer CS-specific degrees. These students and young workers acquired skills that were now also valued abroad.

Figure 1. Fraction of immigrant computer scientists in the US, by country 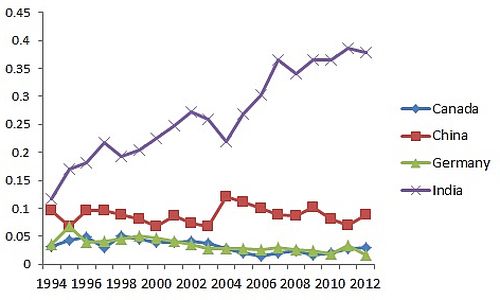 The number of H-1B visas, however, has always been capped, and a large fraction of these workers have had to remain in India, expanding the tech workforce at home. The H-1B visas also expired after six years, and many workers return, bringing with them newly acquired skills, connections and technical knowhow. There has been, therefore, a skilled workforce in India from which both local and foreign IT firms could draw, facilitating the growth of the IT sector in India (Figure 2). By the turn of the century, there were many workers in India that had the necessary skills, a command of the English language, and the willingness to work for far less than their US counterparts. Over time, this has facilitated a shift in production from the US to India, and eroded the US’s advantage in IT exports. 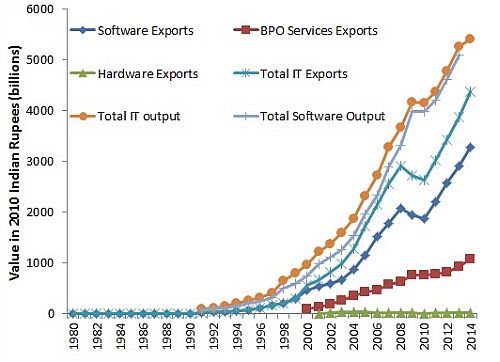 We capture these developments within the framework of a quantitative model that encapsulates the decisions made by firms and consumers in both the US and India. In our model, firms hire different types of workers in complementary occupations – for instance, as the CS workforce expands, firms also need to hire more managers. Computer scientists are innovators, and push out the technological frontier in the IT sector of the country they work in. Such technical upgrades benefit all workers, consumers and sectors (whether it be finance or manufacturing) of the economy that use software. Migrants that return also bring with them acquired skills and are more valued than other domestic workers. The type of technology used by firms also changes over time, often favouring skills related to engineering and CS. Every good valued by consumers can either be produced in the US, India or somewhere else in the world and consumers will buy from the most efficient producer. India and the US are therefore competing to sell their goods to a larger share of the world market.

Importantly, we also model the college-major decisions of students and the occupational choice of college graduates in the two countries. Students have different tastes for different fields of study but take into account their prospective wages in graduating with a specific degree. Technological breakthroughs or changes in migration will affect the expected benefits in attaining a CS degree, and students will choose their degrees accordingly. Once they graduate, these workers decide on a yearly basis whether to work in CS or switch occupations – a process that can be more and more costly the older they are. Indian workers have a shot at winning the H-1B lottery and getting a higher US wage, but must also pay a cost of migration. Changes to the H-1B policy and innovation in the IT sector, therefore, affect how workers choose their occupations over time in both the US and India.

How the CS-worker migration from India to the US impacts workers and firms is rather ambiguous. For instance, there is arguably brain-drain from India, as many of the most skilled workers leave the country. On the other hand, there is also brain-gain as many workers acquire these skills with the prospect of migrating but end up staying in India, and others return from abroad with acquired knowhow. Similarly ambiguous is the impact on workers – CS wages may fall as there are many more computer scientists in both countries, but innovation by programmers may raise wages for all workers including themselves. If CS wages fall, workers may switch to other occupations, like managerial positions, increasing labour supply and lowering non-CS wages as well. On the other hand, as the CS workforce expands, firms need to hire more managers or commercial and marketing professionals, tending to raise non-CS wages.

The effect of migration on the US IT sector is also ambiguous. More CS immigration allows the US IT sector to expand. But the H-1B program also spurred growth in the competing Indian IT sector – which has the opposite effect of eroding the US’s market share in IT. One thing that is unambiguous is that consumers in both countries are better off because they use more efficient apps and software produced by the tech sector.

To resolve the ambiguous predictions of the model, we take our model to the data. We draw from various sources in both the US and India and use methods in the literature on trade and labour economics to calibrate the parameters of our model. Importantly, the firm-side decisions help us measure the innovation shocks which allow us to estimate the labour-supply parameters. We show, as a validation exercise, that our model does a good job of predicting levels and trends in data that we did not explicitly use in the calibration of the model.

We find that the H-1B programme played a rather significant role in spreading the IT boom from the US to India. The possibility of moving to the US encouraged Indian workers and students to acquire skills valued abroad, and along with those that returned from abroad, they contributed to growing the CS workforce in India. This facilitated a movement in tech production from the US to India: Indian IT output is higher by 5% in 2010, even as US IT output shrinks. This hurts some US workers, especially US-born computer scientists who now switch into non-CS occupations, lowering the size of the native CS workforce by 9% in 2010. Overall, however, world IT output is larger by 0.45% and the combined income of both countries is higher by 0.35% (or about US$17.6 billion) because of the H-1B programme. We find that the average worker in both the US and India is better off with immigration.

We also show that it is indeed important to include all the previously described features in our model: for instance, allowing workers to switch occupations mitigates the negative wage impacts on US CS workers – if these workers were stuck in CS occupations, immigration would have lowered their wages by 7%, but allowing them to switch to other jobs leads to a wage depression of only 1.5%. Occupation-switching also importantly facilitates growth in the Indian IT sector as many workers switch to CS jobs. Another modelling feature that we find to be important is return-migration: on the one hand, these return workers help expand the Indian tech sector; However, the prospect of having to eventually return actually dampens the gains from migrating, having a negative effect on tech growth in India.

While the H-1B programme raised overall incomes, it did have various distributional consequences. These results allow us to draw parallels with insights from other work. In the US, immigration hurts some workers while benefitting others (Borjas 1999, Peri and Sparber 2011). Attracting global talent from abroad helped grow the US tech sector (Freeman 2006), but offshoring to India had the opposite effect (Acemoglu et al. 2015). In India, the size of brain-gain dominated the brain-drain effect (Stark 2004), and led to a structural transformation to high-skilled work (Matsuyama 1992). Given that migration policy has been the topic of heated election debates, academic discussions, and media attention across the world, our research provides valuable answers to many important questions.