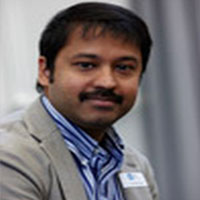 India’s success story in the services sector is well documented at the national level. However, similar literature does not exist for India’s states. This column seeks to bridge this gap by looking at India’s services growth at the sub-national level over 1980-2006. Contrary to existing literature, it suggests that services growth in India may be able to reduce income disparities across states in the long run.

Services have emerged as the largest and fastest-growing sector globally in the last two decades. In line with this global trend, the services sector in India has also witnessed rapid growth, especially since the 1990s. In fact, this growth has now led to India becoming an ‘outlier’ in terms of its services sector performance in the years since the turn of this century. Services contributed 52.6% of the country’s Gross Domestic Product (GDP) in 2006, which is higher than the share for countries at a comparable level of per capita income as India. The sector employed 32% of the country´s labour force in 2004. Services exports accounted for 38.4% of India’s total exports in 2006 (against 20% in 1990), and services trade was 15% of the country´s GDP in the same year (up from 3.4% in 1990)1.

How sustainable is India’s services-led growth?

India’s services growth has generated a lot of interest among academics and practitioners and there has been considerable research trying to explain the “services revolution” in the country (Hansda 2002a and 2002b, Gordon and Gupta2003, Salgado 2003, Banga 2005, Verma 2006, Eichengreen and Gupta 2010). However, the sustainability of services-led growth in India has been questioned (Mitra 1988, Bhattacharya and Mitra 1990, Arunachalam and Kumar 2002). In particular, the literature attributes the lack of increase in services employment to the inability of the services growth process to draw people away from agriculture, with associated implications for income distribution and convergence2.

All these studies, however, look at the performance of services at the national level and to the best of my knowledge, there is not much literature exploring the services phenomenon at the sub-national or state level in India. I not only bridge this gap in research by using sophisticated techniques, but also challenge existing literature by suggesting that services growth in India may be able to reduce disparities across states in the long run (Shingal 2012). Further, I find that external demand is an important determinant of services value added 3 in a number of states, and that this demand emanates from all over the country. This suggests that the benefits from services growth are being distributed more widely than is perceived to be the case.

An overview of service sector performance at the state level

I conduct a state-level analysis of services contribution to Gross State Domestic Product (GSDP) and employment across Indian states by sectors for the period 2000-2007. In general, trade, hotels and restaurants; real estate and business; and construction services have been the traditional big contributors to services sector in terms of value added over time across a majority of Indian states. Hence, the structure has been fairly similar across regions as well as over time. The 1990s witnessed the rising importance of banking and insurance, while communication services have gained significance in the years since 2000.

An analysis of services contribution to employment across Indian states for the post-2000 period suggests that in terms of sectors, trade and distribution; hotel and restaurants; and community, social and personal services have accounted for almost two-thirds of all workforce employed in services. This structure has been fairly similar across all states. Construction and transport, storage and communication services come next, but the hierarchy between them has varied across states. I also see a lot more variation in the share of services in total employment across states compared to that in value added.

A review of the literature studying income convergence across Indian states reveals that most studies find significant income divergence (accounting for differences in methodology, coverage of states and sample size). However, with the exception of Dasgupta et al. (2000) and Kar and Sakthivel (2007), none of the studies have looked at the sectoral pattern of GDP. Is it possible that any particular sector may in fact be showing evidence of convergence?

Using traditional measures of convergence from the growth literature (Barro and Sala-i-Martin 1992, 1995), I test our data for the presence of absolute convergence across 14 major states of India. The findings confirm the absence of income convergence. This is in line with the findings of the existing literature studying income convergence across Indian states. However, interestingly, when I replicate this analysis for individual sectors, I find evidence of absolute convergence in per capita services across the same states. These findings were also confirmed using more sophisticated techniques from the recent empirical literature (for details see Shingal 2012).

Our analysis reveals that at present, convergence in services is not resulting in convergence in income across states due to the offsetting impact of divergence in the industrial sectors, and the concentration of the labour force in agriculture. However, with services growth adding further to the share of services in GDP and employing a greater share of the country´s labour force, this growth is bound to have positive implications for income distribution. Moreover, services growth is not restricted to modern sectors like Information Technology (IT), telecom, financial and business services which are spatially concentrated, but is equally visible in traditional services like construction, distribution, transport and tourism, where the benefits from the growth process are more widely distributed. Additionally, the human capital skill requirements are less intense in these sectors and the growth process would therefore involve a greater share of the labour force over time, drawing people away from agriculture. Services growth can thus be the answer to India´s income divergence in the long-run. What is more, this makes services growth more politically sustainable than has been made out to be thus far. This is also corroborated by the recent economic performance of Bihar; significantly, the state shows a higher share of services in GSDP over 1990-2007 compared to other major Indian states at a similar level of economic development (Figure 1). 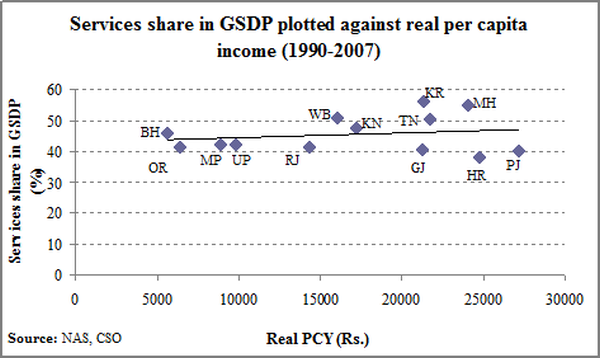