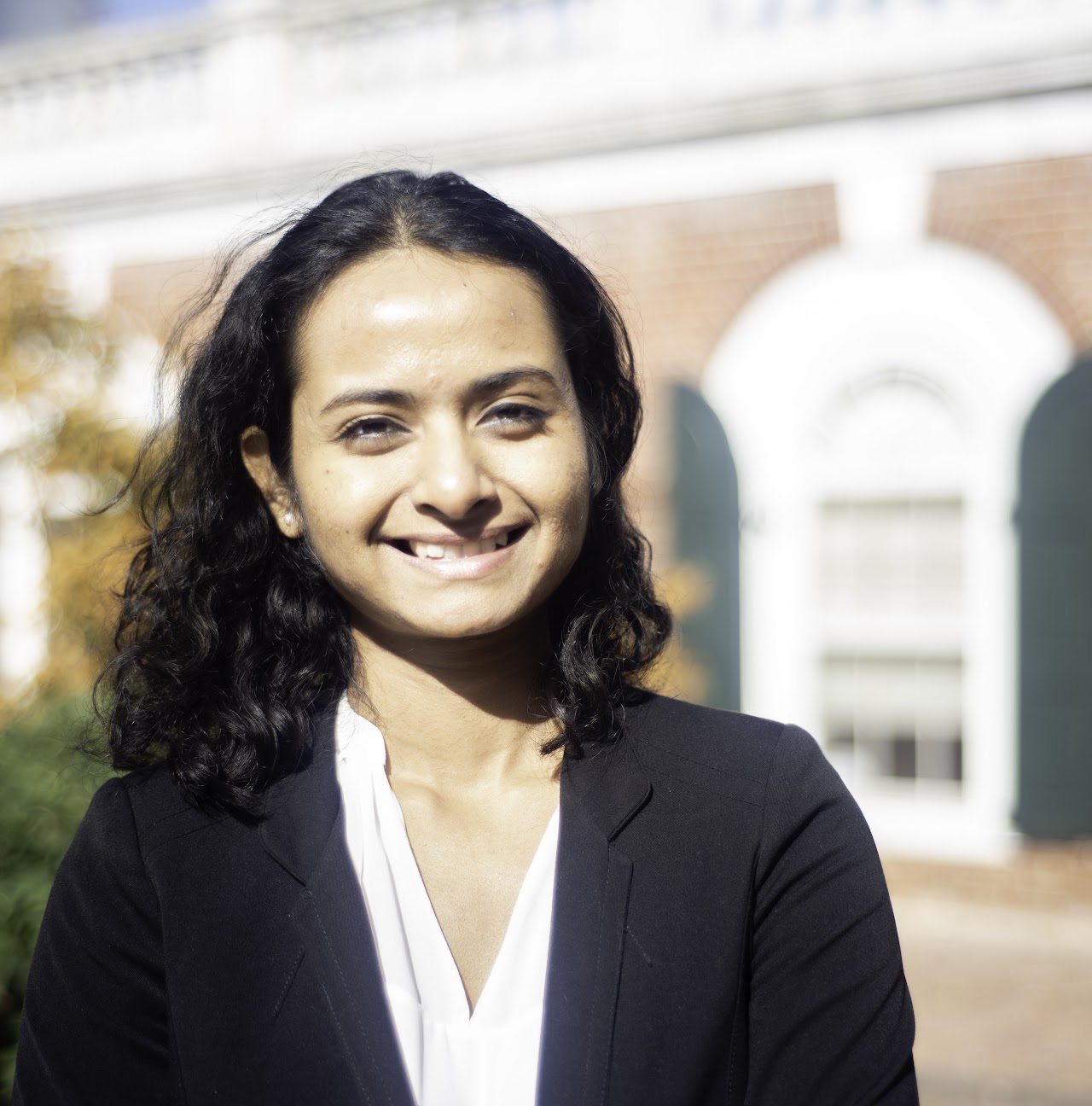 The Indian economy experienced trade expansion and an IT boom during 1993-2004. How did the spectacular growth in a high skill-intensive sector – concentrated in a few big cities – affect inequality across the country? This article shows that individuals born in districts with good access to jobs and education received welfare gains of 0.51% for every percentage increase in IT exports, vis-à-vis 0.05% in remote districts.

There is widespread interest in how trade affects regional inequality. This question has been especially important for India, where the trade to GDP (gross domestic product) ratio and per capita income increased by more than 90% and 60%, respectively, during 1993-2004, while the number of individuals considered ‘poor’ fell by only 2%1. This period of expansion in trade was accompanied by a boom in the information technology (IT) sector, with the contribution of IT to India’s GDP increasing from close to zero in 1993 to 3.6% in 2004. How did this boom in a high skill-intensive sector affect economic inequality and welfare across districts in India?

In a recent study (Ghose 2021), I examine the effect of the IT boom on regional inequality in India. While the growth in IT employment in certain large cities such as Bangalore, Hyderabad, and Mumbai has been quite spectacular and brought India to the global limelight, it is challenging to evaluate how this job growth affected people from other parts of the country, such as an individual from a remote district with scarce local access to higher education. The answer to this question depends on how easy it is to acquire higher education locally, or to move for education or jobs.

Effect of the IT boom on regional inequality

I use the expansion of IT during 1998-2002, largely driven by external demand shocks such as the Y2K, to study the effects on IT employment and engineering enrolment in the long run, that is, between 2005 and 2011, using an event study design. My choice of this time frame is dictated by the fact that an engineering degree takes at least four years to complete and thus any effect on the labour market related to skill acquisition will occur after 2004-2005.

I combine detailed spatial and migration data from the Census of India, Economic Census, NASSCOM (National Association of Software and Service Companies), and NSSO (National Sample Survey Office) for several years during the time period 1992-20132.

I document that IT employment and engineering enrolment, a major source of skilled labour for the Indian IT industry, responded to the rise in Indian IT exports in the late 1990s induced by global shocks such as the Y2K. This response was heterogeneous across regions, depending on a region’s historical software exports and the local availability of jobs and higher education.

Consistent with these stylised facts, I develop a quantitative spatial equilibrium model that allows individuals to make education and work decisions in two stages. In the first stage, they decide what and where to study, accounting for access to higher education and job opportunities. Access to higher education and job opportunities are both determined by the availability of education and jobs in their own and nearby districts, inversely weighted by the distances of these nearby districts from their own districts. In the second stage, individuals choose the sector and location of work. In the model, sector-specific trade shocks, such as the Indian IT boom, change the relative returns to occupations across locations based on two factors: (i) The location’s comparative advantage in that sector, for instance, how well-connected, historically, these districts are to firms abroad, and (ii) The location's connectivity to other locations. The changes in the relative returns to occupations affect an individual’s incentives to invest in different skill types. Skill investments are constrained by the local availability of higher education and the costs of moving to districts with colleges. Thus, districts differ in how much skilled labour they can access and consequently, by how much they can expand IT production. Differences in local access to jobs and education, along with differential moving costs for work and education, generate regional inequalities in the welfare gains from the IT boom.

I find that the ability to acquire higher education is key to realising the benefits from the IT boom. The measure of welfare derived from the theoretical model is ex-ante, that is, it depends on the expected measure of access to education and jobs before individuals make any decisions. For every percentage increase in IT exports, welfare increased by 0.16%, on average. The average masks substantial variation across districts, and individuals born in districts with good access to jobs and education experienced welfare gains to the tune of 0.51% for every percentage increase in IT exports while their counterparts in remote districts experienced gains as low as 0.05%.

How costly it is to move for education and work, and why is it important?

While there is a sizeable literature analysing the effects of frictions in the labour market on welfare gains from trade and export booms, there is no evidence on how the latter is affected by frictions in the education market3. To answer this question, we first need to understand how large the frictions associated with accessing education and moving for work are. Census data on district-to-district migration in India in 2001 show that the proportion of people moving for education was much lower than the proportion of people moving for work. Figure 1 plots the percentage of people who migrated for work and for education out of the total number of workers and college graduates, respectively, at the destination district using 2001 Census data. On average, less than 2% of the graduate population in a district came from another district, while the corresponding number is 26% for the working population.

Figure 1. Migration for work versus education 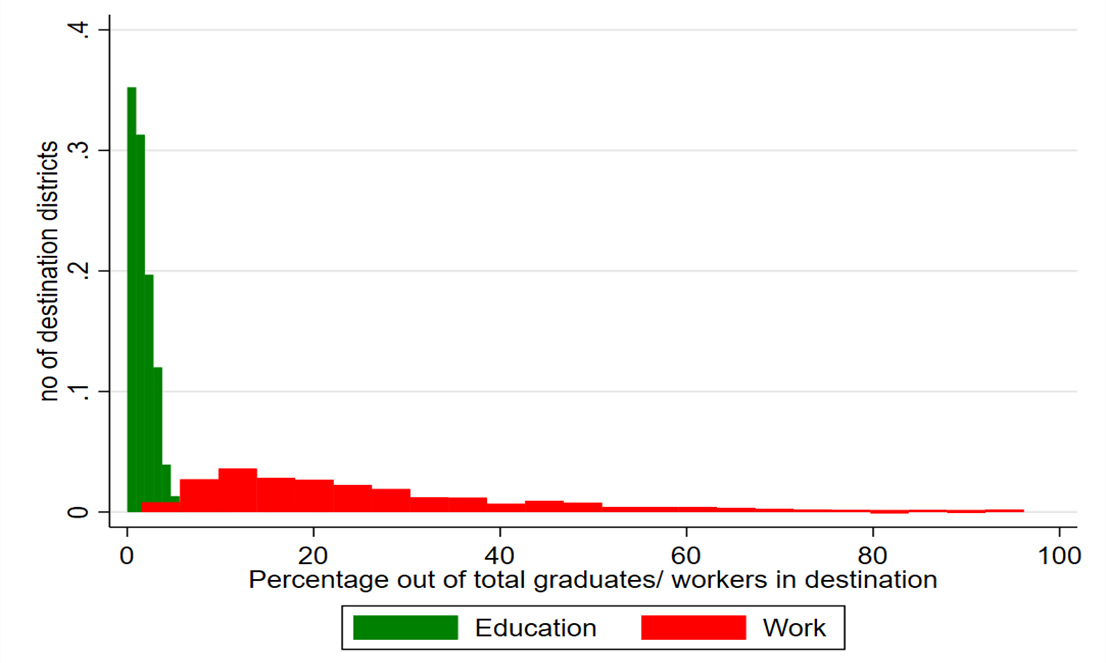 These data on district-to-district migration flows, disaggregated by reasons for migration, help us identify the migration costs by reasons for migration. I find that migrants have to be compensated about 88% more to make up for lost utility when they migrated for work across districts within a state, on account of various factors such as cultural differences, loss of home network, and transportation costs. This cost is about 90% when people moved for education.

The picture is more complicated when we consider migration to a different state. The costs of crossing state borders for work between two neighbouring districts belonging to two different states were about twice as large relative to when the neighbouring districts lie in the same state. This effect is even larger when the reason for migration was education4. Many state-level policies, such as quotas for in-state students, create barriers to interstate mobility for education, but not for work.

How important is this migration cost for education that I estimate? To quantify it, within my model, I restricted individuals to attend colleges in their home districts. This increased regional inequality by 47%. The gap between the welfare gains of the worst-off and the best district in the sample increased by 56%.

I find that reductions in the migration costs for education are more important than reductions in the migration costs for jobs, in lowering regional inequality due to trade. The intuition for this finding is that an individual can move for education to a college located closer to IT jobs, making it less likely that they will need to move later in life for a job. However, a lower mobility cost for work does not matter too much if a high barrier to moving for education restricts an individual from acquiring education in the first place.

Reducing in-state quotas for students at colleges can reduce the migration costs for education by reducing the border costs of moving for education. I estimate that eliminating all border costs of moving for education reduces regional inequality in welfare gains by more than half. Reducing interstate barriers to education can significantly increase access to education for out-of-state students. This can increase the opportunity for people from remote regions to gain access to education and migrate to areas with more high-skilled jobs. Although this policy does not reduce inequality in the distribution of jobs, it reduces inequality in the distribution of welfare by enabling more people to access education, and therefore, potentially access skilled jobs. These findings thus, demonstrate that even though a lot of emphasis has been placed on labour market policies for workers displaced by trade, and on the geographic inequality in the distribution of jobs, policies pertaining to the education market can be at least as effective in addressing some of the regional inequality concerns around trade.

The dangers that lie beneath India's IT layoffs