Caste and entrepreneurship in India 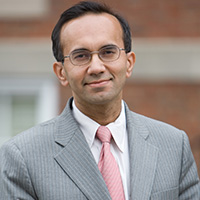 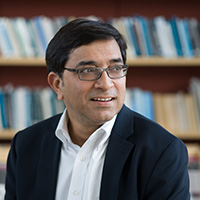 It is now widely accepted that the lower castes have risen in Indian politics. Has there been a corresponding change in their entrepreneurial activity? This column seeks to answer this question by analysing comprehensive data on enterprise ownership in India. It is found that Scheduled Castes and Scheduled Tribes are under-represented in ownership of private enterprises, and employment generated by private enterprises. This trend is widespread across space and time.

It is now widely accepted that the lower castes have risen in Indian politics. Has there been a corresponding change in their entrepreneurial activity? This column seeks to answer this question by analysing comprehensive data on enterprise ownership in India. It is found that Scheduled Castes and Scheduled Tribes are under-represented in ownership of private enterprises, and employment generated by private enterprises. This trend is widespread across space and time.

The question of the change in entrepreneurial activity of lower castes relates to two narratives about India’s growth experience. On the one hand, there is considerable concern that growth has benefitted the rich more than the poor, the towns and cities more than the villages, and the upper castes more than the lower castes (Varshney 2007). For instance, India’s Gini coefficient of income inequality1 increased from 29.6 in 1990 to 36.8 in 20042. A contrasting narrative emphasises the rise of Dalit entrepreneurs. Articles in leading newspapers and magazines have focused on the emergence of Dalit millionaires (Aiyar 2011)3. A new Dalit Indian Chamber of Industry and Commerce has been formed.

While Dalit millionaires may be increasingly visible, how far do they represent the general state of Dalit entrepreneurship in the country? How has the caste map of entrepreneurs changed? While a variety of political economy questions concerning lower caste welfare have been studied, there is no consensus on their overall progress. Some studies, for example, have shown an increasing convergence in habits and rituals across caste categories (Kapur et al 2010), but others document persistent differences in important development outcomes like consumption expenditure, education levels and access to public goods (Desai and Dubey 2011, Banerjee and Somanathan 2007). The relationship between caste and entrepreneurship, however, remains under-researched4.

Examining the role of caste differences in entrepreneurship

We examine the role of caste differences using comprehensive data on enterprise ownership from the Economic Censuses of India conducted in 1990, 1998 and 2005 (Iyer, Khanna and Varshney 2013). These censuses are conducted by the Central Statistical Organisation, and present a complete count of all non-agricultural enterprises in the country. The 2005 wave covered more than 42 million enterprises, employing around 99 million workers, 49% of whom were employed by urban enterprises5. The Economic Censuses provide detailed information on the location and industrial classification of each enterprise, the number of workers employed, the mix of family and hired labour, sources of finance, and the caste category of the enterprise owner. Since the ownership of publicly traded firms or cooperatives cannot be assigned to a specific owner’s caste, our analysis focuses on the ownership of private enterprises only. We focus on the data from 19 large states of India, which account for 96% of India’s population and 95% of all enterprises6.

Our analysis highlights three main findings. First, as late as 2005, Scheduled Castes (SC) and Scheduled Tribes (ST) were significantly under-represented in the ownership of private enterprises, and the employment generated by private enterprises. SCs owned 9.8% of all enterprises in 2005, well below their 16.4% share in the total population. A similar pattern of under-representation is observed for STs, whose members constituted 7.7% of the nation’s population but owned only 3.7% of non-farm enterprises, employing 3.4% of the non-farm workforce. In contrast, we find that members of the Other Backward Castes (OBC) are well represented in entrepreneurial activity. OBC members owned 43.5% of all enterprises in 2005, and accounted for 40% of non-farm employment. This is very much in line with their estimated overall population share of 43%7.

Patterns across space and time

Our second finding is that the under-representation of SCs and STs in enterprise ownership is widespread across space and time. As Figure 1 shows, the share of the non-agricultural workforce employed in SC-owned firms is lower than their population share in all states except for Assam. It is not the case that the states which were among the earliest to have progressive movements to end caste discrimination during the first half of the 20th century (Kerala, Karnataka, Andhra Pradesh, Tamil Nadu, Maharashtra) have a lower degree of under-representation. 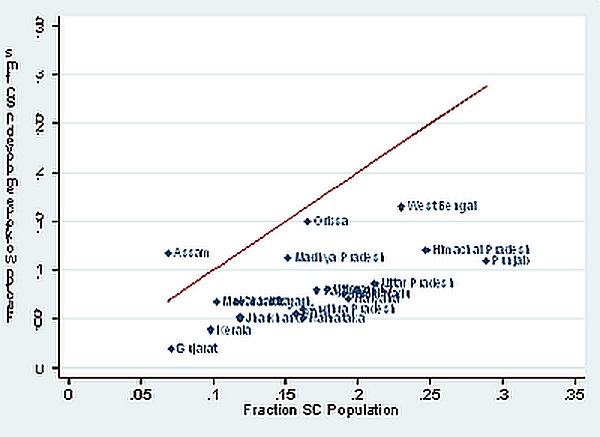 These patterns are not driven by a few pockets of underdevelopment within states. When we examine district level data, we find that the enterprise ownership share of SCs and STs is less than their population share in over 80% of all districts. Even in Ambedkar’s native Maharashtra, which witnessed successful Dalit8 movements and a commitment by all political parties to Dalit issues, we find that the share of the workforce employed in SC-owned enterprises is lower than the SC population share in 25 out of 34 districts. Politics and economics remained mismatched.

The caste differences in entrepreneurship also do not appear to be disappearing over time. The share of enterprises owned by SCs in 2005 was the same as it was in 1990, while the employment share in SC-owned enterprises increased by less than one percentage point. The STs also show a similarly modest increase in their share of entrepreneurship over this long period (share of enterprise ownership rising from 2.6% to 3.7%; employment share rising from 2% to 3.4%). Again, there is a sharp contrast with the OBCs, who made significant progress over the period 1998-2005, increasing their share of firm ownership from 37.5% to 43.5%, and their share of employment from 33.8% to 40%9 .

Finally, we show that in addition to these broad measures of entrepreneurship, there are significant differences in firm characteristics across caste categories. Enterprises owned by members of SCs and STs tend to be smaller; the average number of people employed is 2.13 for enterprises owned by non-SC/STs, 1.72 for SCs and 1.89 for STs. SC and ST-owned enterprises are less likely to employ labour from outside the family, more likely to belong to the informal or unorganised sector, and less likely to access institutional sources of finance. All these differences across caste categories are more pronounced in urban areas compared to rural areas, suggesting that these results cannot be attributed purely to social discrimination which we might expect to be higher in rural areas. SC and ST entrepreneurs thus face significant obstacles in entering entrepreneurship, and in expanding the scale of their enterprises.

What explains these patterns?

We should note that outright discrimination is unlikely to be the full answer, since many of these differences in enterprise ownership and enterprise scale are larger in urban areas where, following Ambedkar, one expects discrimination to be lower. The caste differences in entrepreneurship are not significantly associated with demographic or economic characteristics such as literacy rates or levels of secondary schooling, the proportion of the population engaged in farming or the fraction of agricultural labourers (a rough proxy for lack of access to land). Nor are they attributable to variation in the choice of industries across castes, since the industry mix has been converging rapidly across caste categories.

This suggests that we need to examine more nuanced hypotheses in order to understand the reasons behind the observed facts. For instance, a potential hypothesis is that the growth of enterprises depends strongly on network effects, both for finding the right workers and for making links with suppliers and customers. SC and ST enterprise owners might thus be disadvantaged by their relatively smaller networks, particularly in urban areas. Testing these kinds of hypotheses would require measuring such networks at a very local level. We see our work on documenting caste patterns in enterprise ownership as providing a basis for more detailed theories and empirical tests.

A version of this column has appeared in the Economic and Political Weekly.