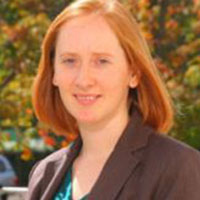 Analysis of National Sample Survey data shows that low rates of female labour force participation in India are concentrated among married women in rural areas. This column suggests that this is partly because women with medium levels of education choose to spend more time on child care and domestic work.

Globally, about half of all women work, and recent increases in rates of female labour force participation have contributed to a falling gender gap in employment in many countries. Yet, in India, trends in women's participation in the market economy are moving in the opposite direction. Despite a rapid fertility transition, broad increases in women's educational attainment, and substantial economic growth over the past two decades, the share of Indian women working has fallen over time. Currently, only about one-third of India's half a billion adult females report being part of the labour force. These low rates of female employment and declining trends in women's labour force participation rates are potential causes for concern, because market work for women is often associated with their better access to economic opportunities and with greater decision-making power within the household. From a macroeconomic perspective, low rates of market work among women also imply a significant underutilisation of labour resources in the economy.

In Figure 1, we show labour force participation rates (LFPR) over time by gender and urban/rural area, for the sample of adults aged 25 to 65. Men work at substantially higher rates than women, and rural women work at higher rates than urban women. Strikingly, rural Indian women experience the largest declines in LFPR over time1. In 1987, their LFPR was around 55%; by 2011, only 44% were working in the market. Figure 2 shows that within the sample of rural women, those who are married drive the overall decline in women's LFPR. To what extent can changes in individual and household characteristics account for these changes in the labour force participation of married women in rural areas over time? 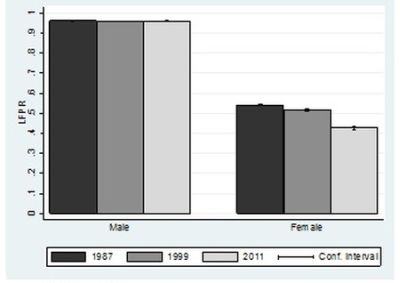 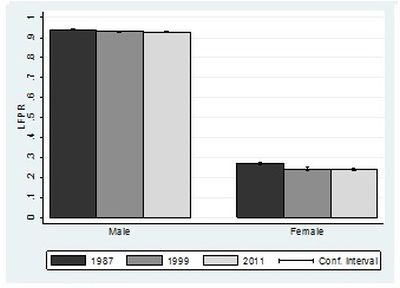 Why should more women's education contribute to lower rates of LFP? Figure 3 shows a U-shaped relationship between women's education and their participation in the labour market. As women move from being illiterate to having primary and middle levels of schooling, LFPR falls. LFPR only start to rise as education increases to completed secondary schooling and to the graduate level. Over the last three decades, women in rural India have gained enough education to move younger cohorts from illiteracy to low and middle levels of education. But, in contrast to urban areas, schooling in rural areas has not yet expanded enough to pull most women through completed high school or further, into graduate education. Figure 3 suggests that human capital improvements may not yet have reached sufficiently high levels for women to earn high enough returns in market work in rural India3. 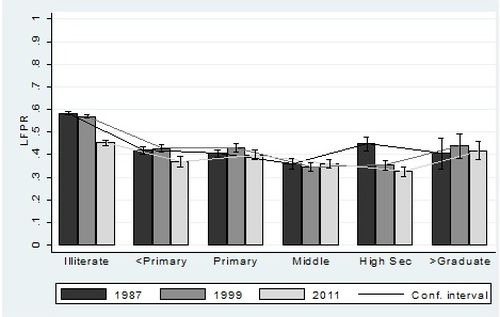 Part of the puzzle: Are rural women with some education doing more at home than in the market?

What are these married women in rural India doing, if they are not in the labour force? One hypothesis is that even with more education and fewer children, rural women's time may be relatively more valuable in home production. This could be because women are objectively more productive at home with higher levels of education, or because men or women's preferences for home relative to market work change with more education.

In Figure 4, we show that the decline in rural married women's LFPR has been accompanied by an almost equivalent increase in the proportion of women who report domestic work as their primary activity in the past reference year during 1987-2011 (from 55% in 1987 to 69% in 2011). Other results suggest that the decline in the LFPR of women aged 25-40 was larger than the decline for 40-65-year-olds in both decades. These younger cohorts are most likely to have children of school-going age – almost twice as many 6-14-year-old children as women aged 40-65 - in the NSS, and therefore most likely to experience high returns to child care in the home. 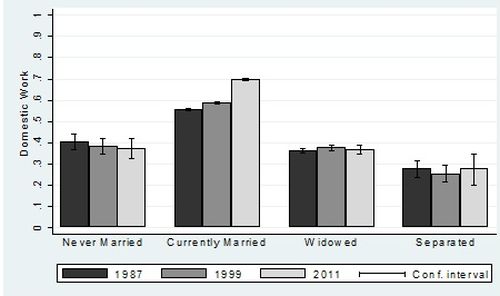 Note: The sample includes women aged 25-65 in rural India. The above graph reports proportion of women whose primary activity is domestic work.

We explore the relationship between education and time spent on child care and other household activities using time-use data from the 1998 Indian time-use survey. Figure 5 shows distinct increases in women's time spent in child care and other chores at higher levels of education, up to higher secondary schooling. More education, at least up to primary, middle, and upper secondary school, implies more work in the home for mother.

Findings from other research give some reason to think that more education makes women's time in the home more valuable. First, returns to education in home production may have increased during the period of our study because returns to children's human capital were rising. In earlier periods, researchers have shown that returns to investing in male education in India increased after the introduction of green revolution technology (Behrman et al. 1999) and this in turn increased the demand for educated women in the marriage market. Women with primary education spent more time at home and the presence of an educated mother increased time spent by children studying, relative to less educated mothers. Similar mechanisms could be at work during the 1987-2011 period, when labour market returns to higher levels of education (high school and above) have been increasing (example, Azam 2012, Mendiratta and Gupta 2013, and Kharbanda 2012).

Second, the cross-sectional evidence (from the year 1998) in Figure 5 is in line with broad patterns in some other parts of world like Brazil (Lam and Duryea 1999) where dramatic improvements in female education and reductions in family size only translated into more market work once women attained more than eight years of education. Taking all of our descriptive evidence together suggests a compelling explanation for why women's LFPR in rural India has declined over time. As women (and men) get more education and poverty rates have fallen, the gap between returns to home production versus returns to market work has grown larger. Future research could usefully try to quantify the changing relative returns to market and home production for Indian women. 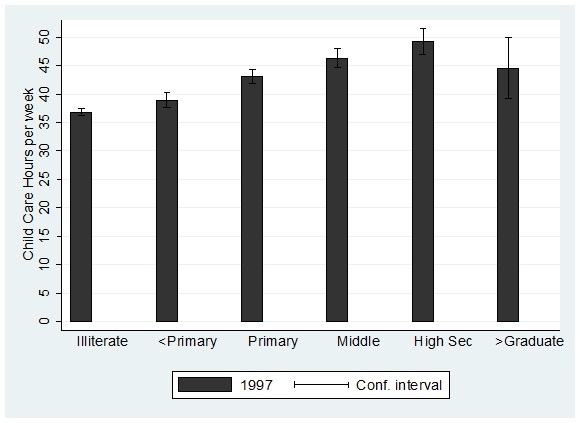 Source: Author's calculations from the 1998 Indian Time Use Survey.

Note: Figure plots hours spent in a week on exclusive child care and other domestic chores, which indirectly add to children's well-being or can be done while supervising children. This includes time spent on cooking and cleaning house, washing clothes and utensils, along with the activities in exclusive child care. Child care includes physical care of children (washing, dressing, feeding), teaching training and instruction of own children, accompanying children to doctor/school/sports/other, supervising children, travel related to care of children. ‘High Sec' refers to secondary and higher secondary level of education. The sample is of rural, married women aged 25-65 living with at least one child aged 0 to 15. The total number of observations is 7,593.

India has experienced large improvements in levels of education, falling fertility rates, and increasing incomes across the income distribution since the late 1980s. Somewhat surprisingly in this context, rural women in India have removed themselves from the labour market at increasing rates over time. Our analysis suggests that increasing levels of education for men and women have an important factor accounting for this decline. Part of understanding why this is the case is related to the observation that women with medium levels of education choose to do more domestic work, and spend more time on child care and home production. Overall, our descriptive analysis suggests that, relative to urban women, rural women in India may still be on the downward sloping part of the U-shaped curve of female LFP.