The macroeconomic benefits of gender diversity 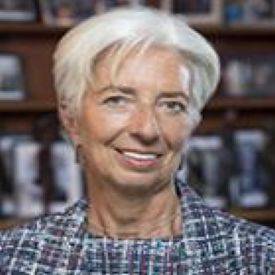 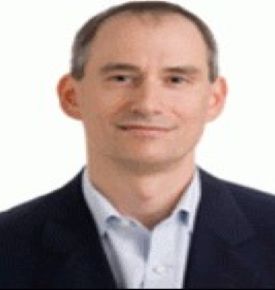 The persistent gap between female and male labour force participation comes at a significant economic cost. This article argues that because women and men complement each other in the production process, the economic benefits from gender diversity are likely to be larger than suggested by previous studies. Gender complementarity also has important implications for the welfare costs from barriers to female labour force participation. The case for gender equity is even more compelling and pressing.

Although changes in cultural attitudes, childcare policies, and technologies have contributed to narrowing gender gaps over the past two decades, female labour force participation (FLFP) remains too low, with no advanced- or middle-income country having been able to reduce the gender gap below 7 percentage points. This continued uneven playing field between women and men comes at a significant economic cost.

Our analysis springs from the observation – supported by considerable microeconomic evidence – that women and men bring different skills and perspectives to the workplace, including different attitudes to risk and collaboration (Lagarde 2014). Women have been found to be more risk averse, reflecting greater fear of negative outcomes (Croson and Gneezy 2009), and to be more averse to competition (Harbaugh et al. 2002). Gender differences have also been linked to the nature of the job (Brussevich et al. 2018), to the stakes, and to time pressure. Hiring women can increase the productivity of women already employed in a firm, by reducing within-firm discrimination. In addition, studies have shown that the gender composition of a firm’s board affects its performance. Deszö and Ross (2012) find that for firms whose strategy is based on innovation, gender inclusiveness has positive effects on firm value, and Christiansen and others (2016) find that the effect of female representativeness in corporate boards is larger for firms in the services sector, high-tech manufacturing, and knowledge-intensive services. Gender diversity in boards of banking-supervision agencies has also been associated with greater financial stability (Sahay and Čihák 2018). Surprisingly, previous studies have not looked at the macroeconomic implications of this microeconomic evidence.

In the textbook neoclassical growth model, the labour force is the sum of the headcounts of male and female workers. Because replacing a man by a woman in this sum does not affect the labour force, there are no gains from gender diversity per se. Is this a reasonable assumption? This is an empirical question that needs testing.

The evidence – from macroeconomic, sectoral, and firm-level data – shows that women and men complement each other in the production process (Ostry et al. 2018). To gauge the extent of complementarity, we estimate the elasticity of substitution (ES) between women and men in the production function. The ES measures the change in a firm’s use of female labour (relative to the use of male labour) when the marginal productivity of female labour (relative to the marginal productivity of male labour) increases. When the ES is zero, it is impossible to substitute male labour for female labour because producing a good requires fixed proportions of each gender. When the ES approaches infinity, male and female labour are indistinguishable and there are no gains from gender diversity. Intermediate values of the ES imply that the labour of men and women complement each other to produce the final output.

We find that the estimates are clustered below 1 in the macro data, between 1 and 2 in the sectoral data, and between 2 and 3 in the firm-level data (Figure 1). The assumption that there are no complementarities between female and male workers is decisively rejected by the data. When female workers are initially in short supply relative to men, the effect of increasing female employment is larger than the effect of an equivalent increase in male workers as long as female productivity is not substantially lower than male productivity. Models that do not account for complementarity therefore underestimate the impact of gender diversity on growth, inappropriately attributing a part of growth to total factor productivity rather than to its real cause – past increases in female participation.

Figure 1.Range of estimates for the elasticity of substitution 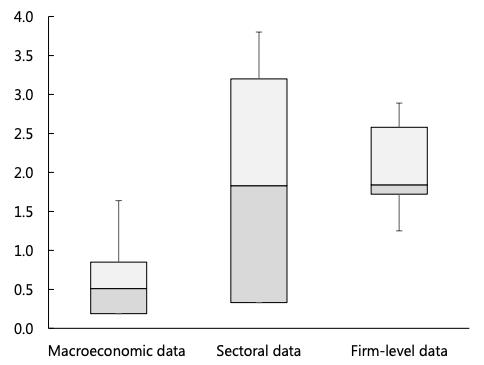 A key implication of our empirical analysis is that male wages are likely to rise as a result of narrowing gender participation gaps. There are two opposing effects from increasing FLFP on male wages. The first is the complementarity effect which increases productivity and thus male wages. The second is the capital-intensity effect which lowers wages as total labour supply increases. When the ES is below an estimated threshold of about 2.5 (as it is in our estimates), the first effect dominates and higher FLFP tends to boost men’s real wages. This is important because it should strengthen support for removing barriers that hold women back from productive participation in the labour force.

A second implication is that GDP (gross domestic product) gains from closing gender gaps are likely to be larger than we thought, based on models that do not account for gender complementarity. As shown in Figure 2, the range of estimates for the ES presented in Figure 1 imply that closing gender gaps in LFP could dramatically increase GDP, depending on the initial value of FLFP. Our calibration exercise suggests that, for the bottom half of the countries in our sample in terms of gender inequality, closing the gender gap could increase GDP by an average of 35%. Four-fifths of these gains come from adding workers to the labour force, but fully one-fifth of the gains is due to the gender diversity effect on productivity. 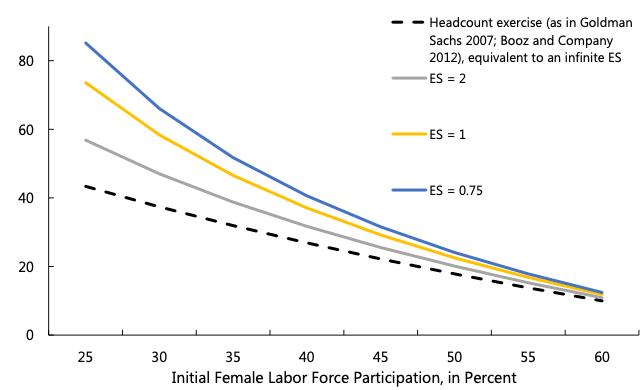 Source: IMF staff estimates.
Note: The calculations assume that there are constant returns to scale to labour, that male labour force participation is at 75%, and that women’s working hours are 17% lower than men’s. See Ostry et al. (2018) for explanations of the calculations.

The finding of gender complementarity – that gender diversity yields additional benefits – can also be incorporated into a model used to assess the welfare costs from different barriers to FLFP. The model disaggregates between the production of home goods and marketable goods to differentiate gains in GDP from gains in welfare. It also allows the number of women employed in different sectors to be driven by both the presence of barriers – capturing discrimination, cultural differences, social norms, and so on, which can affect either labour demand and/or supply – and the presence of potential differences in productivity across sectors. With services typically being a relatively more gender-equal sector, the model can be used to quantify the costs of barriers to FLFP when such barriers interfere with the process of structural transformation that is inherent in economic development.

The model, applied at the country level, suggests that only large barriers to FLFP can explain observed cross-country differences in FLFP. In particular, barriers are estimated to be equivalent to a 4% tax on female labour in the average country in Europe and Central Asia, but rising to the equivalent of a 53% tax rate on female labour in the average country in the Middle East and North Africa (MENA; see Figure 3). Significant gains in employment equality, income and welfare are therefore achievable by removing existing barriers. As an example, gains in welfare are likely to exceed 20% in the MENA and South Asia regions. Regional variation in welfare gains is explained by differences in the estimated barriers to FLFP and differences in initial income levels (welfare gains from increased production and consumption are larger in poorer countries). 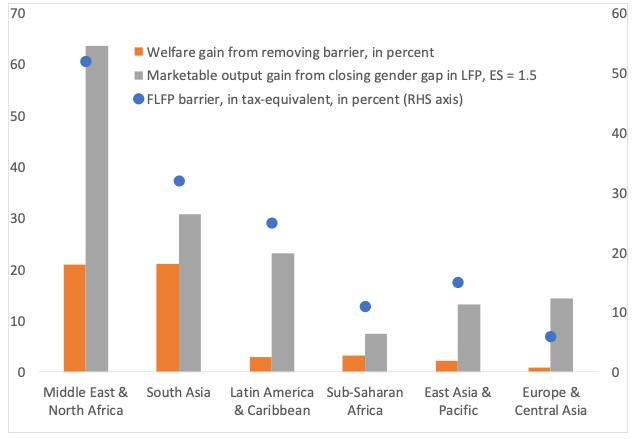 These are not all new concerns, but there is a renewed sense of urgency. For years, the IMF has been at the forefront of policy analysis highlighting the economic costs of inequality and possible remedies (Ostry et al. 2014, 2019). We know that the unlevel playing field between women and men has substantial economic costs. What we are now learning is that these costs are even larger than we previously thought. Now that we see the full picture, the case for greater gender equity has become even more compelling and pressing.