The Real Estate (Regulation and Development) Bill, 2015, is focused on protecting the few home buyers who can afford to buy homes but does not address the issue of high land prices, which is a very serious problem. This column demonstrates that the market prices of land in India are very high compared to fundamental values, and to market prices in developed countries.

For the stock market, there has been an old practice of making a distinction between market prices and fundamental values (Shiller 1981). Somehow, a similar exercise has not been used much in the case of an asset like real estate. It is true that there is an old tradition of using the ratio of home price to home rent and the ratio of home price to buyer’s income as indicators of fundamental value of homes. However, these metrics are not always appropriate (Singh 2013a). In this column, I use a methodology for evaluating the fundamental value of land that is motivated by the approach used for evaluating stocks and that has a better grounding in economics. This exercise can be difficult (more so when different pieces have to be put together) and it may not lead to precise results. However, that is no reason not to confront this important issue. As the well-known British logician, Carveth Read, wrote in 1920, “It is better to be vaguely right than exactly wrong.”

The fundamental value of land in India

Consider Table 1. This is self-explanatory. The data on prices pertain to the period 2007-2010. Though the data may appear to be a bit outdated, it is from an authentic source. Also, the NHB Residex1 for residential property for 26 Indian cities has not appreciated in real terms over the period 2007-2014 (Singh (2015) and the references therein, and International Monetary Fund (IMF), (2015)). So the figures for absolute values in Table 1 from Chakravorty (2013) can be used at present. 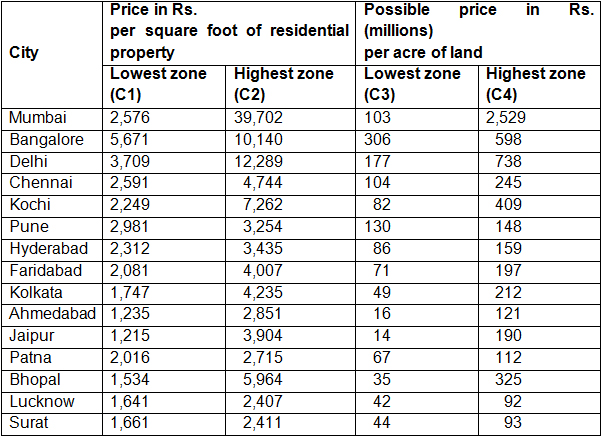 Columns C1 and C2 in Table 1 show apartment prices for the highest zone and the lowest zone respectively. Assuming that these zones correspond to ‘good’ location and ‘not good’ location respectively, and further assuming that the effect of ‘not good’ location on price is zero, it follows that prices in column C2 can be used as a proxy for the price of an apartment per se rather than its location. In what follows, the focus will be on column C1 and on the corresponding column C3; the latter shows that the minimum possible market price of urban land varies between Rs. 14-306 million per acre.

Let us say that land is diverted from actual or possible agricultural use for the purpose of constructing urban homes. So, the fundamental value of land for urban homes is the opportunity cost of land that could have been used in agriculture. This, in turn, may be computed in two ways.

First, we may consider the discounted present value of crops that can be grown on the land (after subtracting costs of inputs other than land). The maximum value was about Rs. 520,000 in 2010 for, what is arguably the most prosperous agricultural state in India, namely, Punjab (Chakravorty 2013).

The fact that the fundamental value of land is low is consistent with the other fact that by and large farmers have low incomes that are derived from production of crops on land. Also, “A calculation shows that even if all of India´s population had a dwelling of 1000 square feet per family of 4, this requires only 0.76% of India´s land area, assuming a low FSI [floor space index] of 1.” (Ajay Shah 2008) So real estate development for providing urban homes does not, fundamentally speaking, face a shortage of land.

Next, consider an international comparison. The ratios of price to construction cost of urban homes for 102 metropolitan areas in the US in the year 2000 are as follows: Average is 1.46, 90th percentile is 1.852 and the maximum is 4.06 (Glaeser and Gyourko 2008). A high ratio indicates a high price of land. Now, Glaeser and Gyourko argue that these ratios for the US are quite high. However, the situation in India in this regard is much worse. The comparable ratios in India computed from Table 1 range from 2.4 to 39.7 in the highest zone and 1.21 to 5.67 for the lowest zone.

Table 2. Price of agricultural land in different countries in Europe 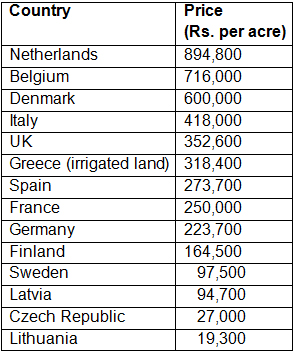 The cost of a home includes not just the cost of land but also other costs. Let us return to Table 1 and consider construction cost. If the market price of land is high, then indeed, high-rise construction is an optimal choice. However, if the market price is close to the fundamental value of land (that is, low), then there would be, except in a few places, hardly any rationale for land-saving high-rise buildings for which the cost of construction is higher than in the case of ordinary single- or double-storeyed homes. So, the estimate for the cost of construction at Rs. 1,000 per square foot for the period 2007-2010 (as mentioned at the bottom of Table 1) is not low at all for the purposes of this analysis.

Even if other costs like the true cost of development and the true cost of marketing are considered, the substantive conclusions here will not change. Of course, there are also various transfers masquerading as economic costs in the pricing of real estate but these have to be ignored in computing the fundamental values.

Why does over-pricing of land happen? Is it necessarily a bubble? What can be done about it? All these are interesting questions but these are outside the scope of this column; these are explored in Singh (2015). The Real Estate (Regulation and Development) Bill, 2015, which the Parliament is considering at present, is focused on protecting home buyers who can afford to buy homes in the first place. It does not address the issue of high land price. Unless this is done, housing problems are here to stay for a very large segment of the population.

Thank you for sharing this information.

Thanks for enlightening us about the price of land and its opportunity cost.

Thanks for sharing nice information regarding real estate and also Buying land for investment or for a living is considered to be a major move financially and emotionally rather than investing in any other http://sindhuraprojects.com/open-plots-for-sale-in-tukkuguda/