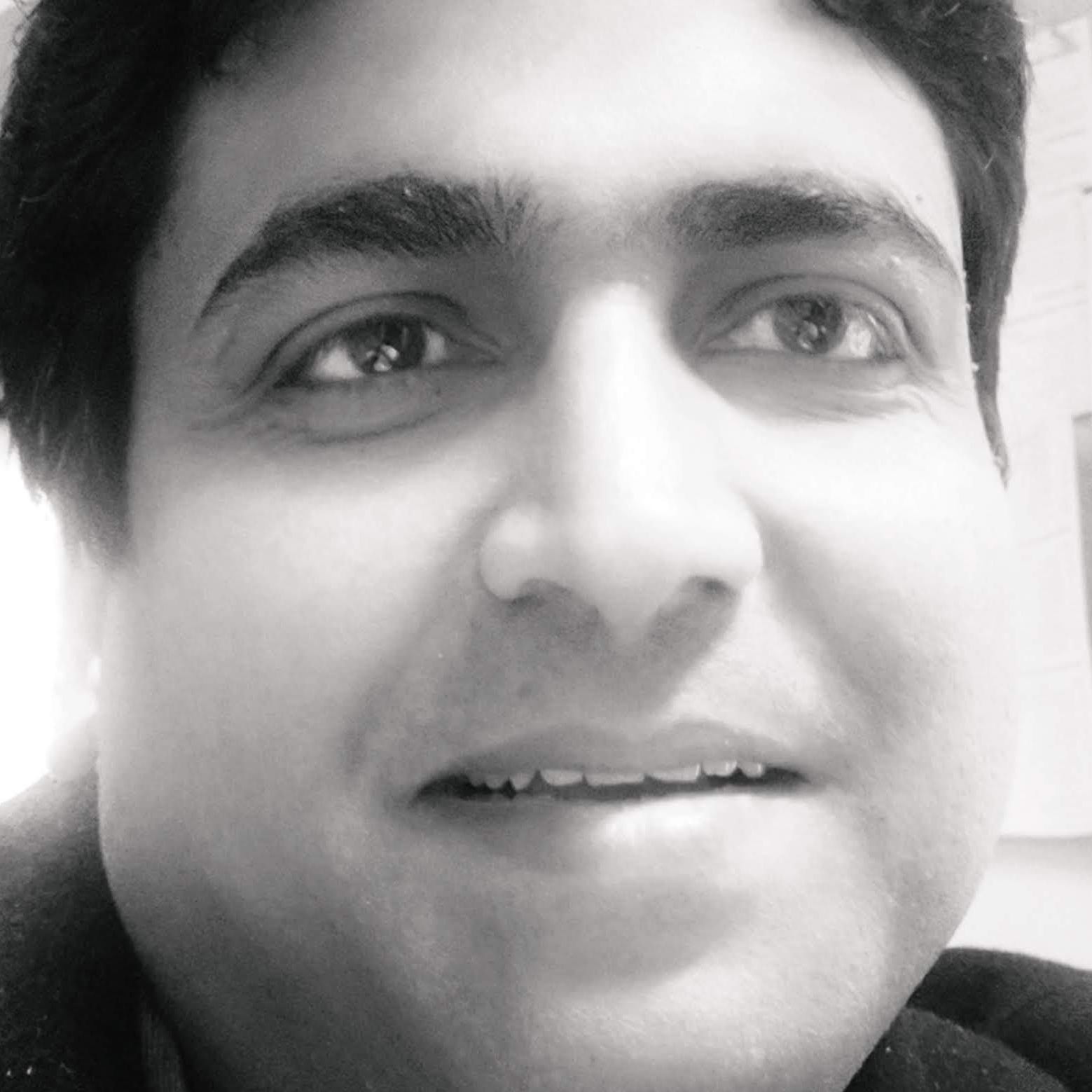 Rising mechanisation in Indian agriculture has been accompanied by reduction in farm employment in rural areas, particularly for women. This article shows that the observed 32 percentage point increase in mechanisation during 1999-2011 can account for 22% of the 30% overall decline in women’s rural employment in agriculture. This is driven by a significant fall in labour used for weeding, an operation that follows tilling of land.

Between 1999 and 2011 the proportion of working-age adults employed in India’s rural farm sector fell by 11 percentage points (National Sample Survey (NSS) 1999, 2011). Figure 1 below plots the change in labour use per hectare of farmland cultivated over time. Clearly, female labour use has fallen over time while male labour use has not changed much. Women have fared worse, with not only a decline in their farm sector employment but also a steady decline in their overall labour force participation in rural India over the last three decades (Afridi, Dinkelman and Mahajan 2017) – from 49% in 1999 to 40% in 2011, and further to 28% in 2017 (Periodic Labour Force Survey, 2019).

Figure 1. Trends in labour use in Indian agriculture 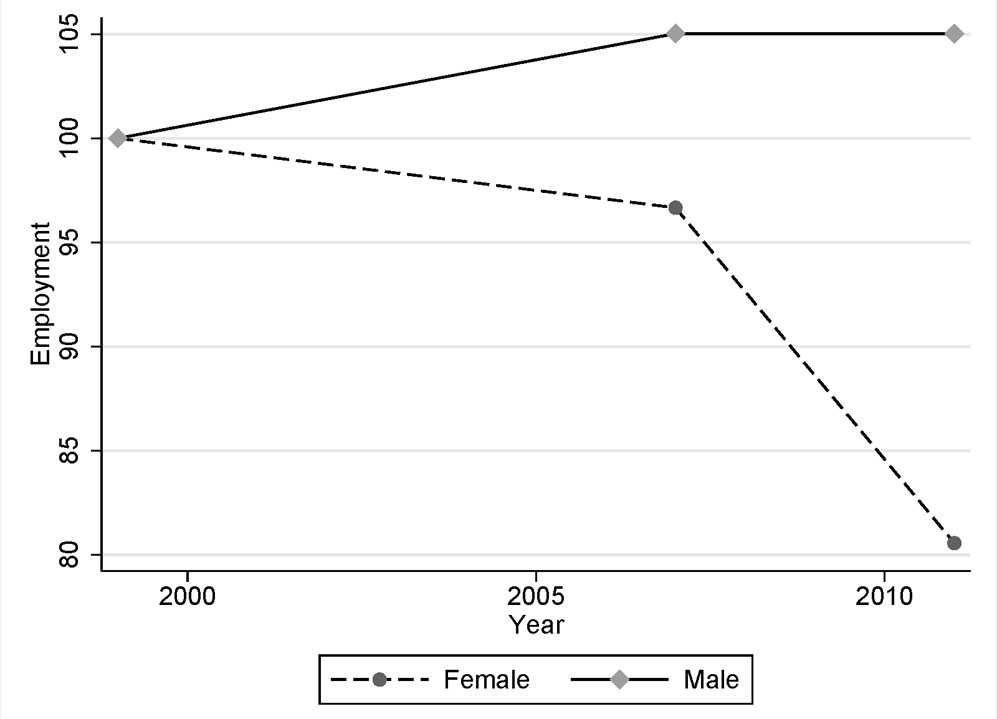 Source: Authors’ calculations based on 55th, 64th, and 68th rounds of NSS.

Note: Labour use refers to total number of individuals aged 15-65 working in the farm sector in usual status1 divided by the total area cultivated in a district, by gender. The value of this variable is indexed to 100 in the year 1999, and the values in 2007 and 2011 are calculated relative to the value in 1999, by gender.

The fall in use of women’s labour in rural areas has been accompanied by the rapid mechanisation of Indian farming over the last two decades. Between 1999 and 2011, the number of tractors, which provide power to most farm machinery in India, tripled – from 2 to 6 million overall or from 16 to about 40 tractors per 1,000 hectare (ha.). Figure 2 shows an increase in implements drawn by mechanised sources of power during 1999-2011, while those operated using human and animal power declined. An operation-wise analysis shows that that the largest increase in mechanical power usage has been in tilling operations.

Figure 2. Trends in implement use in Indian agriculture 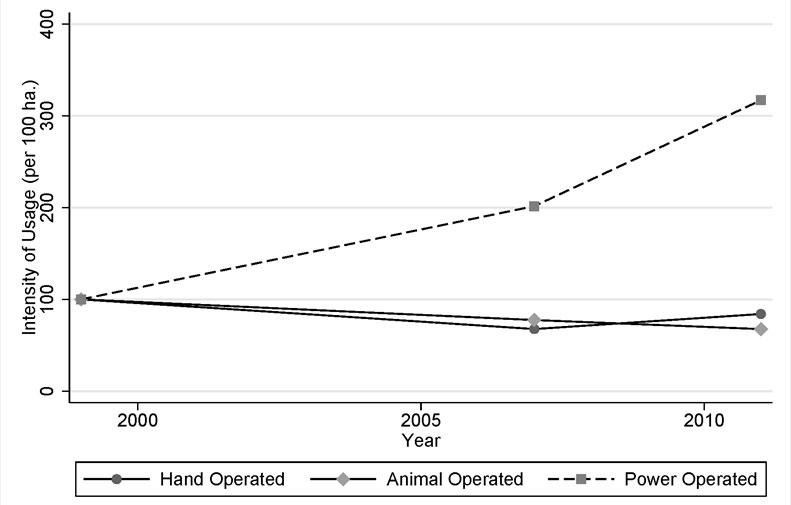 Note: Implements are grouped by their source of power. The area under all implements for a given power source is aggregated and divided by the total area cultivated in a district. The value of these variables is indexed to 100 in year 1999.

The division of labour in agriculture has a distinct gendered characteristic – women and men perform different tasks and hence, are imperfect substitutes for each other in agricultural production. Women's labour is less likely to be used in operations that require physical strength, that is, in the first stage or in upstream tilling operations, and more likely to be utilised in tasks that require precision, that is, second stage or downstream operations like sowing, transplanting, weeding, and for picking tea leaves in tea cultivation (Table 1).

Source: Authors’ calculations based on 55th, 64th, and 68th rounds of NSS data.

Existing literature has focussed on the effects of technological change on skilled versus unskilled where, when they are imperfect substitutes and technology complements skilled labour (Acemoglu 2011). However, there is limited evidence of the impact of technological change in contexts where the division of labour across tasks is gendered, leading to imperfect substitutability between female and male labour – as in agricultural production. When women perform tasks that require different skills than men, and which have limited substitutability with tasks typically performed by men in the agricultural production processes, technological change can have disproportionate gender impacts. In recent research (Afridi, Bishnu and Mahajan 2020), we analyse the effect of increased use of farm machinery on women’s and men’s labour use3 in agriculture.

Investigating the link between mechanisation and labour use

Machine usage is likely to be 'endogenous'2 to relative factor prices and other economic characteristics of a district. It is possible that areas where non-farm labour demand increased (due to better infrastructure or other district-specific reasons) – resulting in higher local non-farm wages – saw a movement of labour from the farm to the non-farm sector. This, in turn, could have increased adoption of machines in the farm sector in these areas, leading to a negative relationship between mechanisation and labour use in the farm sector – rather than due to the effect of machine use on farm labour.

Using ‘exogenous’ variation in the difference between loamy and clayey soil shares4 in a district, we first show that machine usage in the tilling of land is significantly determined by the extent of loaminess of the soil. We use variation in soil type as this is naturally endowed and is independent of any factors that affect women's labour force participation directly. Since loamy soil – relative to clayey soil – is more amenable to deep tillage, it is likely that there is greater use of mechanised tools to aid in land tilling. The assumption is that soil texture (relative loaminess) affects farm labour use only through its effect on machine adoption, conditional on other controls. We then utilise this predicted variation in mechanisation to analyse its impact on women's and men's labour used on the farm.

We find that a one percentage point increase in mechanisation decreases female labour used per hectare by 0.7%. Men's labour also falls by 0.1% per hectare, but insignificantly. This finding is robust to controls for agricultural, demographic, and economic characteristics of a district, including pre-existing labour force participation of women, district-specific employment trends due to differences in initial labour use, and state-specific time fixed effects5.

Thus, the observed 32 percentage point increase in mechanisation during 1999-2011 led to more than 22% overall reduction in women's labour use in agriculture. This decline in women's labour is driven by a significant fall in labour used for weeding – an operation that follows tilling of land in the agricultural production process.

With greater adoption of power-operated implements in land tilling, a task that requires physical strength and therefore more male vis-à-vis female labour, it is possible that demand for male labour falls. However, to the extent that men's labour is complementary to tilling machines, since they are more likely to operate these implements than women, any fall in men's labour usage is mitigated. On the other hand, adoption of machines in tilling has a cascading effect on demand for labour in downstream operations, which require more precision and less physical strength – tasks in which women specialise (Table 1). Specifically, better quality tillage reduces weed growth, lowering the demand for weeding labour. Hence, we find that the overall effect of mechanisation on women's labour use is significantly more adverse than men's labour use.

At the same time, we do not find evidence of substitution of women's labour towards the non-farm sector, suggesting either lack of alternative employment opportunities or limited labour mobility of women, or both.

These findings suggest that in contexts where there exists division of labour, technological change may adversely affect one type of labour more than the other, potentially exacerbating inequities in the labour market. We find that this holds true for women in agriculture. Therefore, policy measures to stem adverse labour impacts of technological change, require a gender perspective. In the Indian context, we also find that women are unable to engage in alternative employment in non-farm sectors, such as manufacturing, construction, and services when work opportunities in agriculture decline. Expanding women's labour market opportunities, for example through re-skilling, and/or reducing barriers to their physical mobility may be critical to stemming any decline in women's labour force participation due to technological change.